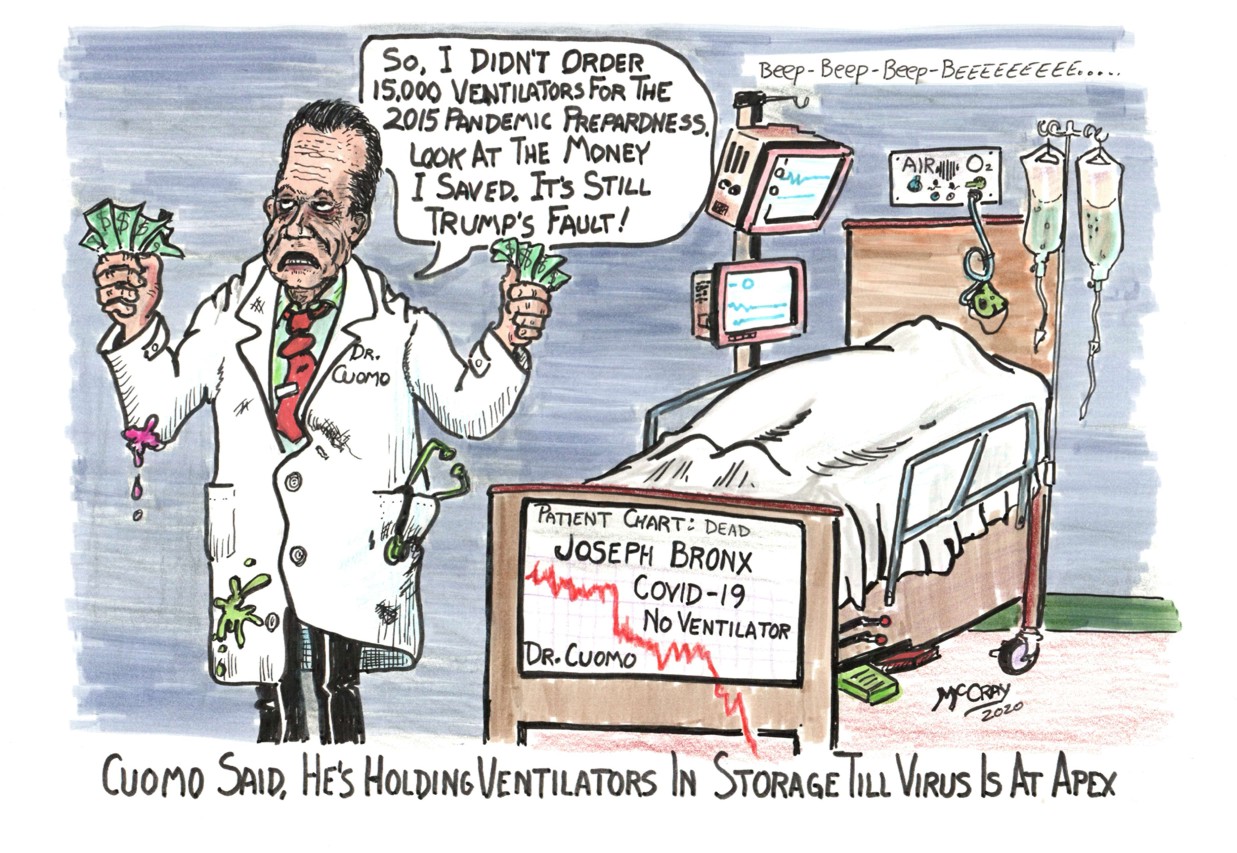 When it became evident that New York City would be the epicenter of the Chinese Coronavirus and COVID-19 in the United States, New York Governor Andrew Cuomo began conducting a newscast around the noontime hour, mirroring President Donald Trump’s information briefing of the afternoon, during the 5 o’clock news hour. He spent a lot of time talking about what people should do and how they should get along in New York City and New York State - over and over again. He wanted the Federal Government to supply medical equipment and respiratory ventilators to their hospitals.

It’s all Trump’s fault. Gov. Cuomo is playing the same game as other Democrat Governors of pointing a finger at President Trump for their own lack of preparedness. Cuomo and his administration rejected the recommendation of the 2015 Pandemic Preparedness program to purchase 15,000 respiratory ventilators. He didn’t want to spend the money, but it’s not his fault - now it’s all Trump’s fault. Then he recommended a system for deciding on who should receive treatment; how despotic and socialist of Cuomo.

A large chorus of those mostly on the left have called for the Federal government to step in and run every aspect of the Coronavirus-COVID-19 Pandemic. A massive bureaucratic Federal Government takeover is the dream of the socialists running the Democrat Party. Just think of the kinds of controls and restrictions a Democrat president in the White House could impose in a national emergency. A massive Federal government takeover would take the monkey off the back of the governors and all the blame for any delays or failures could be dumped on President Trump.

President Trump’s decision to let the states handle their pandemic efforts is the only way. First, there is the issue of States' Rights as outline by the Constitution. Second is the management by delegating leadership tasks to the Governors who know their states best. This way the Federal government can marshal limited resources to the individual states, where population and terrain make each state's requirements different.

It turns out, the Governor of New York has been sitting on a stock of ventilators the whole time that he has been calling for 30,000 ventilators. He finally admitted to stockpiling after dancing around the meaning of the word ‘admitted,’ that 4,000 ventilators were in storage, 7,000 had been ordered and they had received 4,000 from Trump. Half of the ventilators requested by Cuomo, he said he was holding ventilators in storage till the Virus reaches its apex. (1) I’m certain the families of those who have died in New York from the pandemic will be very understanding.

Hoarding respiratory equipment isn’t the only problem Cuomo has created; he also wants to play doctor. By refusing to let pharmacies fill orders for the Malarial drug Hydroxychloroquine and the antibiotic Azithromycin from community doctors to treat people for COVID-19 outside of hospitals. People who suffer from Lupus which is treated by these drugs are having trouble acquiring their medication due to Cuomo’s restrictions.

You have to remember Cuomo belongs to a group of know-it-all politicians, who think they are smarter than the doctors and scientists dealing with this crisis. President Trump has made several efforts in supporting New York City by sending medication, equipment, emergency personnel, military medical teams, and the hospital ship, the USNS Comfort in a rapid turn-around; but it’s still Trump’s fault.

The USNS Comfort was sent to absorb the non-COVID-19 Virus cases, to reduce the demands on local hospitals. It's unknown as to who decided to send infected COVID-19 patients to the USNS Comfort. Now the ship has been contaminated, a ship of any size involves narrow passages and close quarters. As a result, the purpose of the ship has been compromised and a crewmember has become infected. People need to slow down a little and use some common sense. They need to decide which is more important, people’s lives or grabbing for political power.