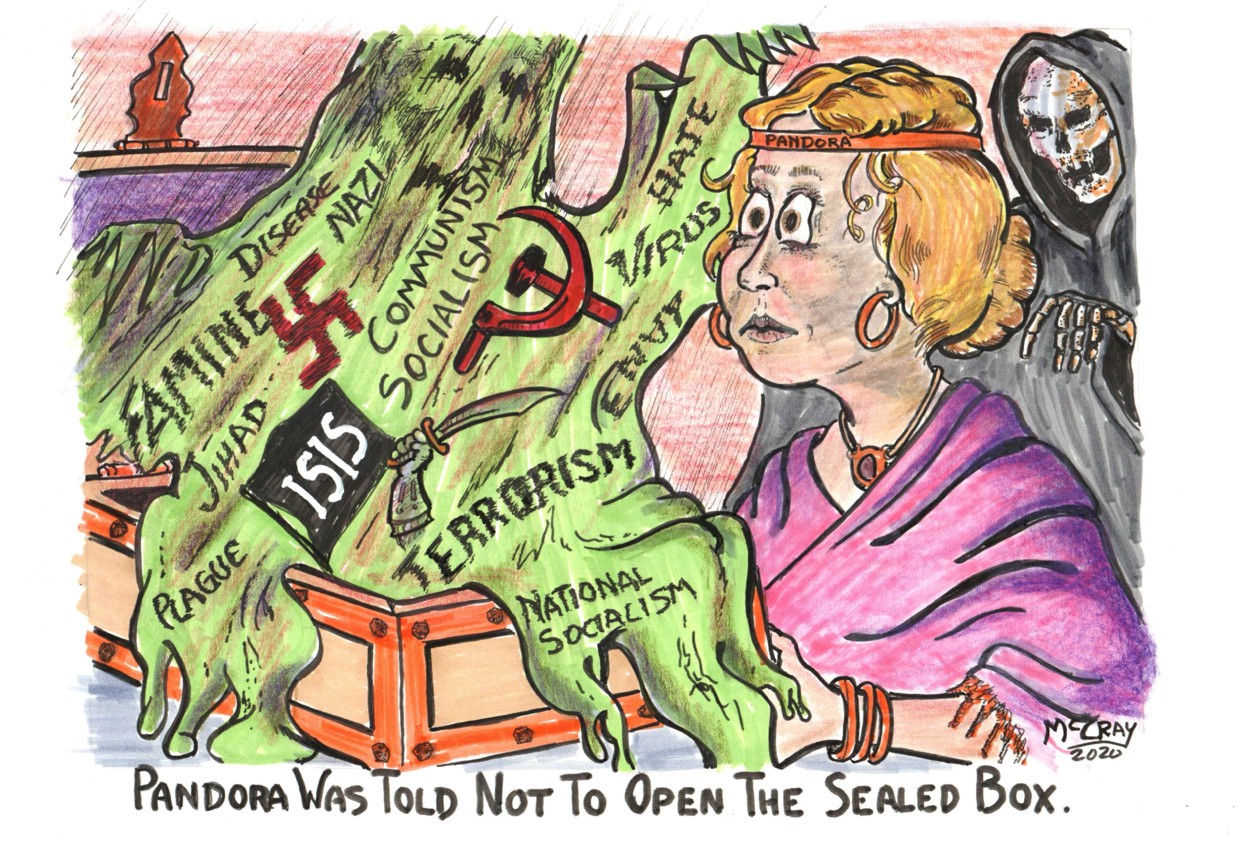 In the mythology of ancient Greece, there is a story of a young woman named Pandora, who was given a box for safekeeping and was told not to open the box. Tempted by her curiosity Pandora opened the box, unleashing all of the ills and evils of the universe on the world. Now don’t go blaming everything on Pandora, people have always had the choice between good and evil. The evil of the world has always sought to destroy good.

Ever since the American Colonies became the United States there has been a concerted effort to destroy the freedoms found in America. The United States has always represented the possibility of a new beginning, and the chance to make it on your own. America came to represent that idea of all things possible and a beacon of freedom to the rest of the world.

The last thing despotic rulers and those that follow the Communist utopian babble of Karl Marx want is a threat to their rule, even if that beacon of freedom is in a distant land. Originally called anarchists, they were generally aimless people who caused upheaval for the sake of disturbing the status quo. When the anarchist latched onto the teachings of Marx, they saw themselves as the great revolutionary hero, by waving the red banner of Communism. Ever since the founding of the Union of Soviet Socialist Republics in Russia in 1922, there has been an organized effort to overthrow democratic governments. First orchestrated by Russian secret police, the NKVD and later by its successor the KGB, they trained and sent agents to organize secret underground subversive cells in other countries. Communist China got involved in pushing their hardcore communism after taking over all of China in 1949 and has become a major threat to the world.

Even though the Soviet Union collapsed in 1991 their minions who have been indoctrinated in socialism and those loyal to China are still undermining the United States. Many governments have been overthrown by subversion, assassinations, agents spying, and corrupt people who were convinced to turn traitors against their own countries.

The U.S. is still on the receiving end of the communist indoctrination efforts at all levels. The education systems, government at the local, state, and national level, entertainment, and business have people who are committed to pushing for a socialist government. The most visible has been Senator Bernie Sanders (I-VT), Rep. Alexandria Ocasio-Cortez (D-NY) and her squad, who reflect what is going on below the surface. For them it’s not about the people, it’s all about the power.

The special interest groups who support the left-wing are connected to each other in order to maximize their effects in coordinated attacks. In their guise of a special interest, their focus is to undermine individual rights in order to raise their importance. This is done by protest, threats, physical attacks which are backed up by legal attacks with lawsuits with a pre-determined outcome by left-leaning judges. Then such actions are supported by a corrupt news media which serve as propaganda services to undermine anyone with whom they don’t agree.
The constant attacks on President Donald Trump, along with anyone who supports Trump, have one goal, and that is his destruction. The socialists now basically control the Democrat Party, and we no longer have an amenable two-party system. The socialists are seeking the total destruction of any opposition and that includes the Republican Party. The actions of the left and their media mouthpiece propagandists want to derail Trump and make him look bad at every turn, which is clearly evident for everyone to see.

In this time of crisis where everyone is affected by the Chinese Corona Virus COVID-19, the left can’t bring themselves to a level where they put the aspirations of power aside and focus on helping the public by assisting President Trump. Instead, the left sees opportunity in the crisis with no concern for the public, and continue to obstruct the Trump administration regardless of the lives that are affected. The Virus notwithstanding, the United States is already in a state of peril, as we are in an ideological Civil War - with a wrong move it can escalate.