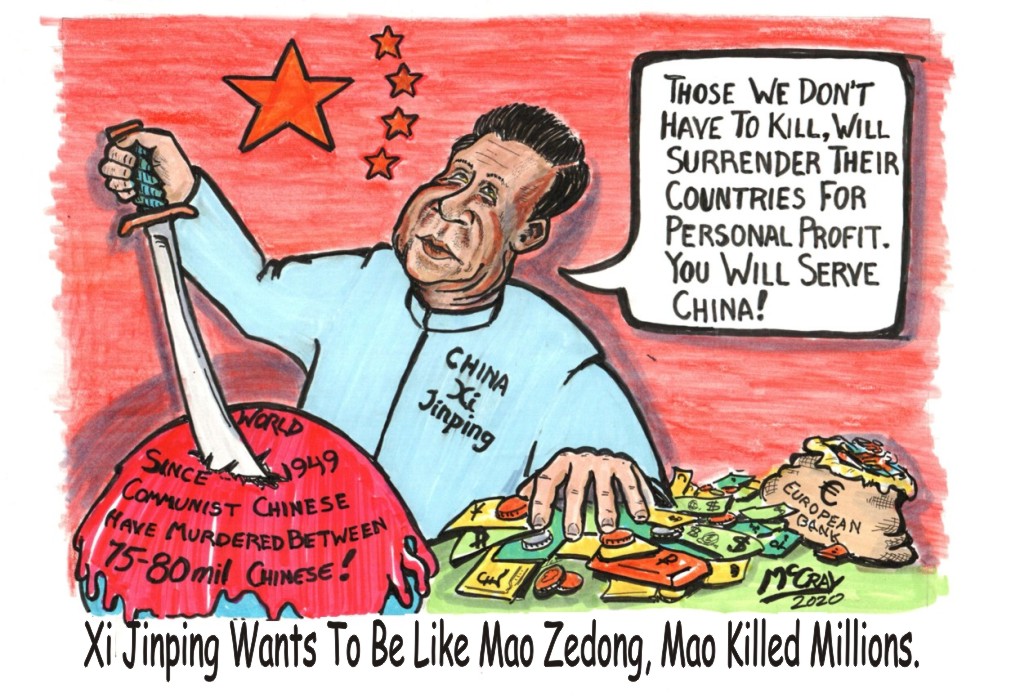 The Chinese Coronavirus COVID-19 has caused a scab to be torn loose, exposing a festering sore on the world, called China. The country of China has consistently been one of the world's bad actors, ever since the Communists seized power in 1949. Led by the communist Mao Zedong, one of the world’s worst mass murderers, estimates are that 75 to 80 million Chinese have been killed since 1949. It’s believed that 40 million died in the four years of Mao’s purge of intellectuals, which was called the ‘Great Leap Forward’ in 1958 -1962.

In the twisted world of the Communist/Socialist left, all of their mass-murdering leaders have been given the title of the "Great Leader." The nuts on the left think Stalin of Russia and Castro of Cuba were "Great Leaders." The left seems to be attracted to dictators and butchers, they absolutely lionize Castro’s chief executioner, Ernesto ‘Che’ Guevara. This means the communist/socialist leader gets ranked as a great, greater, or greatest leader of all, by the number of bodies they pile up. This is twisted thinking by any normal standard, but these are the same people who think abortions and euthanasia are great.

Now the manner in which China handled the Coronavirus has been exposed, as well as how the World Health Organization (WHO) handled the situation. Some recent reporting has the virus escaping the Wuhan Province Government Bio-Lab. This was a result of the biological testing on virus-carrying bats, and the contamination of a lab technician, who later exposed the public to the virus. At first, the Chinese government took the position of denying there was a problem, with the assistance of the WHO which backed up China’s statements.

In January 2020 the United States was able to accumulate enough information to confirm that a highly infectious Coronavirus similar to the SARS Virus had become a pandemic. The moment that President Trump said that China had a problem with a possible pandemic, the world’s left-wing herd and their media propagandists jumped up to defend China. Trump began closing down U.S. border entry points and restricting travel from highly contaminated countries. The predictable left-wing, here in the U.S. and from foreign countries, went berserk accusing Trump of racism and incompetence. After it became blatantly obvious that President Trump was right, the left began calling the President incompetent again, for taking too long to act in shutting down the border.

Initially, it looked like a bad case of Trump Derangement Syndrome, then it became evident that politicians were dancing to whatever tune China was playing. The most prominent was former Vice President Joe Biden of the Obama/Biden (or is it the O’Biden/bama?) administration as Joe Biden referred to the last administration. Biden attacked President Trump accusing him of xenophobic fear-mongering over the use of the "Chinese Virus" remarks, trying to portray Trump as a racist. Biden’s connection to China has been made public through the alleged corruption involving his son, Hunter Biden.

Democrats continue to trash Trump and continue propping up China, in spite of Taiwan’s recent public release of a copy of their messages to the WHO back in December 2019, warning the WHO that China had an epidemic growing in the Wuhan province, a warning blown off by the WHO. If China and the WHO had acted then, the death rate around the world might have been much lower.

Why do so many politicians and the news media want to ignore China or reframe from criticizing China? The answer is money. If the politician isn’t receiving support from China, many of the businesses that donate to the politician’s campaigns have business interests in China or are owned in part by China. China has forced companies wanting to do business in China, to surrender all information and plans for all items manufactured in China.

In the world of espionage, China has infiltrated into the U.S. Defense and commercial manufacturing. Recent reports have pointed out that Chinese agents also are in many major university research programs. China has literally tried to dig their fingers into every aspect of society, including social media - they are the ultimate control freaks of the world. Many of the medications consumed in the United States are made in China, and recently the quality of those medications has come into question. China has had the lion’s share of the electronic components and electronics product market for years - this is extremely dangerous from a commercial and military defense viewpoint.

You can always tell how well communism/socialism is working in a country, by the number of people who have been imprisoned or murdered by their Great Leader, in order for him to stay in power. Tragically, the idiots that believe the babbling words of Karl Marx think this is great, that is, until it’s their turn.