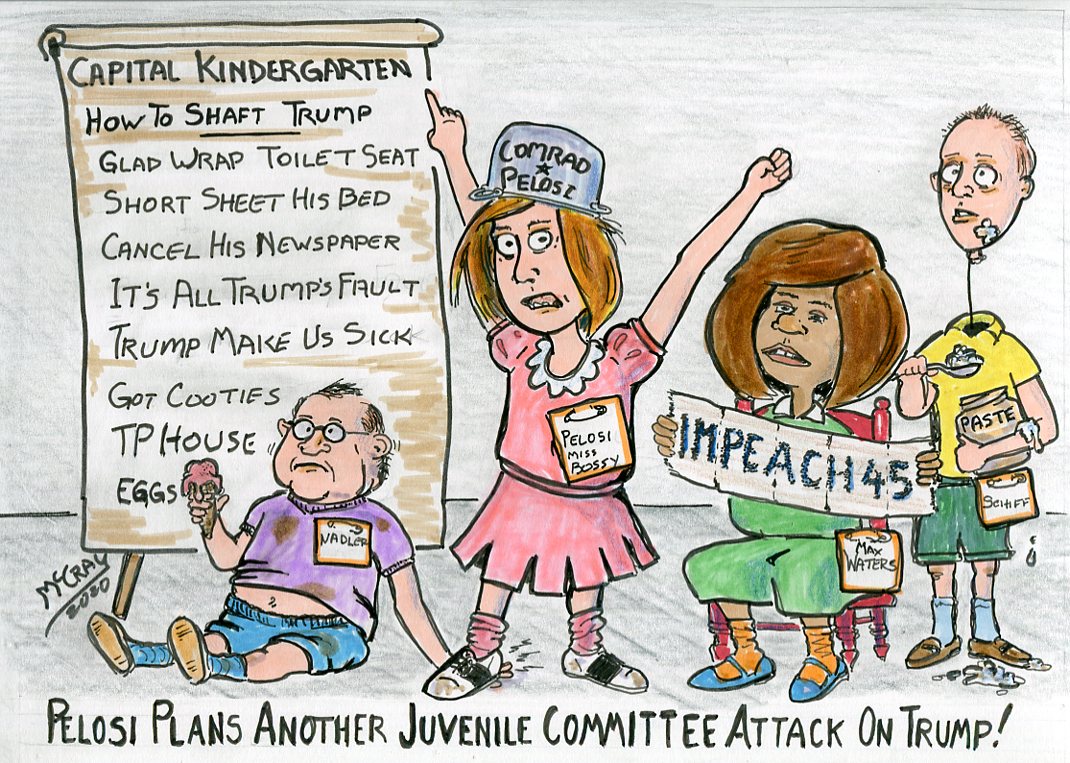 If repeating the same thing over and over again meets the definition of insanity, then House Speaker Nancy Pelosi is completely nuts. Pelosi and the usual band of juvenile nuts that make up the leadership of her so-called investigation committees are at it again. She is lining up a committee to investigate President Trump, again. Oh, yawn! This time it’s about the Chinese Wuhan Coronavirus COVID-19, and how fast the President responded. Remember it is all Trump's fault, they have to investigate and invent a violation that the President is supposed to have committed.

It’s going to be another Russia, Russia and Russian Dossier, and another Mueller Investigation. Pelosi’s band of nuts failed to impeach the President after three years of her House Committees blowing smoke, and creating one lie after another. Now it seems like the socialists who claim to be Democrats, have a two-prong goal in the latest effort to smear the President. The obvious one is attacking Trump with anything they can dream up next, and probably more important for the socialists is protecting China. We have seen multiple examples of the political left and their media allies going to China’s defense. How many of these people have a vested interest in China, and why? Don’t forget VP Joe Biden and the corrupt deals with China, that he has been accused of committing with his son Hunter Biden.

As soon as President Trump began shutting down travel between China and the United States, and later to other countries as the scope of Chinese Coronavirus became apparent, the left-wing politicians and their propagandists in the media went on the attack declaring Trump was incompetent, overreacting, that he was a racist who did not like Asians. After the virus was recognized as a pandemic by the leaders of the world, the media began having a fit saying Trump didn’t act fast enough, that the Federal government was responsible to provide all of the equipment and resources. President Trump’s position continues - the governors who know their states the best would manage their own states and the U.S. government would provide the assistance and resources as needed.

All of the political attacks are revolving around the 2020 Presidential election. The biggest problem for the so-called Democrats, they simply don’t have a platform, everything is anti-Trump. Former VP Joe Biden has nothing to offer - he is serving as a placeholder or frontman. The man has exhibited a disconnect with recent events and seems to get confused in a discussion. On top of these problems, a sexual assault accusation has been leveled against him, made by a former staff member, Tara Reade. What remains to be seen is his choice for Vice President. And does the possibility exist that he will step aside and let someone else run against President Trump?