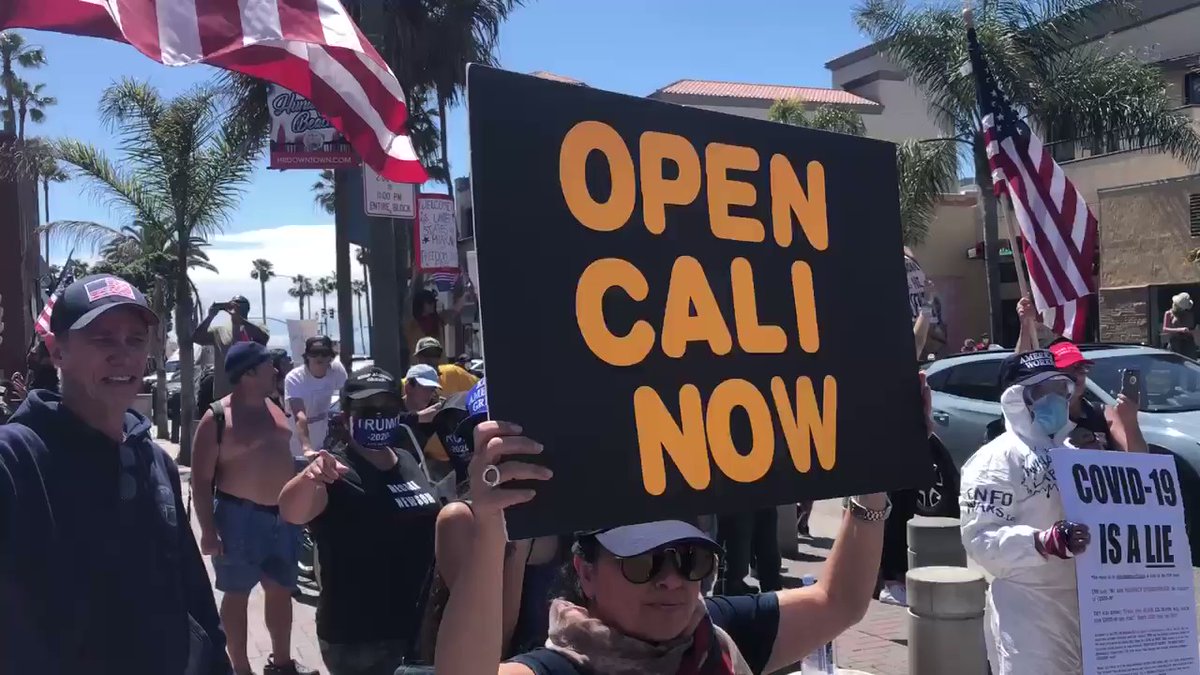 Kristy at #Reopen USA posted the following. “Anyone else feeling like Trump is behaving a bit weak in all this? It's just a question - don't attack, I've been a supporter from day one, and continue to be, but I'm surprised at how he is handling the re-opening of the country. Some of these Governors are blowing it big time, and it seems like he doesn't have any tricks up his sleeve, and is kind of supporting the way they are going about it. Just curious what everyone's take is, I wish he was advising with a more diverse group of people. Thoughts?”

I characterize President Trump's behavior as strategic rather than weak. Many Trump supporters are furious that Trump appears to allow Dr. Fauci and Dr. Birx to dictate when we reopen America. At the same time, Democrats and fake news media absurdly claim Trump is responsible for thousands of deaths because he ignores science and health experts. Fake news media is flooding the airwaves with their claim that over 100 thousand people will die if crazy Trump irresponsibly reopens America. Trump is damned if he does and damned if he doesn't. I am confident that Trump will courageously press forward, doing what is best for We the People.

In a nutshell, coronavirus has liberated Democrats from the restraints of the U.S. Constitution. Folks, we are at war with an evil enemy within, the Democratic party. God placed Trump in the White House for such a catastrophically crucial time as this.

Over the past 3½ years, Democrats and fake news media have launched numerous illegal failed attempts to boot Trump out of the Oval Office. During every attack, a majority of Americans remained in Trump's corner. This coronavirus attack against Trump is different. Because fake news media has successfully instilled fear of coronavirus, many Trump loyalists support the wicked and unnecessary lock-down of our country.

With members of his base supporting the lock-down, this puts Trump in an extremely difficult situation. He must strategically reopen America. I do not pretend to understand Trump's strategy in joining the chorus of those who scolded Georgia governor Kent for reopening his state. However, I did notice that Trump said he would not do anything to stop Gov. Kent.

What keeps me firmly seated on the Trump Train is knowing that Trump loves America and is chomping at the bit to make America great again...again. If there is anyone who can pull off such a remarkable task, it is Donald J. Trump.

Pundits say the shut-down has caused so much irreversible damage that America as we have known it is gone forever. They say Democrat governors have rendered the Constitution null and void forever. God has been known for allowing situations to become impossible to fix before He intervenes.

As a Christian, I cannot surrender to pundits' fatalistic view of our future. The Bible says, “Death and life are in the power of the tongue: and they that love it shall eat the fruit thereof.” (Proverbs 18:21) In other words, you get what you say and believe.

Rather than embracing a defeatist mindset regarding America's future, I believe God would not miraculously give us Trump and then allow his presidency and our country to crash and burn. Therefore, I rally behind Trump's optimistic visionary mission to make America great again, again!

While Trump has persevered and performed like a political Superman, he needs our help. We must push back against Democrats' coronavirus tyranny at all levels.

Mary and I exited Walmart with our cart full of groceries. A staffer stopped us from going directly to our car a few yards away. Due to coronavirus, he instructed us to walk around a large roped off section of the parking lot. My feisty Irish/Cherokee wife began arguing with him. I said, “C'mon Hon, he's just doing his job.” Mary relented.

Driving home, I thought perhaps Mary complaining about the absurd restriction was right and my passive compliance was wrong. I chose not to tell Mary that I saw that Walmart staffer lift the rope to allow a co-worker to go directly to her car parked beside ours.

In California, a buddy had a full basket of groceries when the store manager repeatedly offered him a mask. My buddy refused. The manager said, “Sir, per Riverside County everyone must wear a mask. Do you need a mask?” My buddy smiled and said, “No”. The manager walked away and my buddy was not thrown out of the store or arrested. This is street-level push back folks.

I love and salute Shelly Luther who courageously opened her beauty salon and citizens across America who are organizing protests. You guys rock! We are Americans! (1)

Democrat governors are arrogantly bullying us with coronavirus restrictions that do not apply to themselves, their family, and friends. (2)

Folks, you need to understand once and for all that Democrats and fake news media are sick with hatred for all things wholesome and good and hatred for America. Without hesitation, they will destroy you and America for power to control every aspect of our lives. The treasonous wacko Democratic party must be defeated at the ballot box in November.

In life, “You get what you tolerate.” I learned as a child living in the Baltimore projects that bullies will abuse you as long as you allow them. We must crush the party of anti-American socialist and communist bullies. Thank God we have a courageous and strong man in the White House leading the charge.