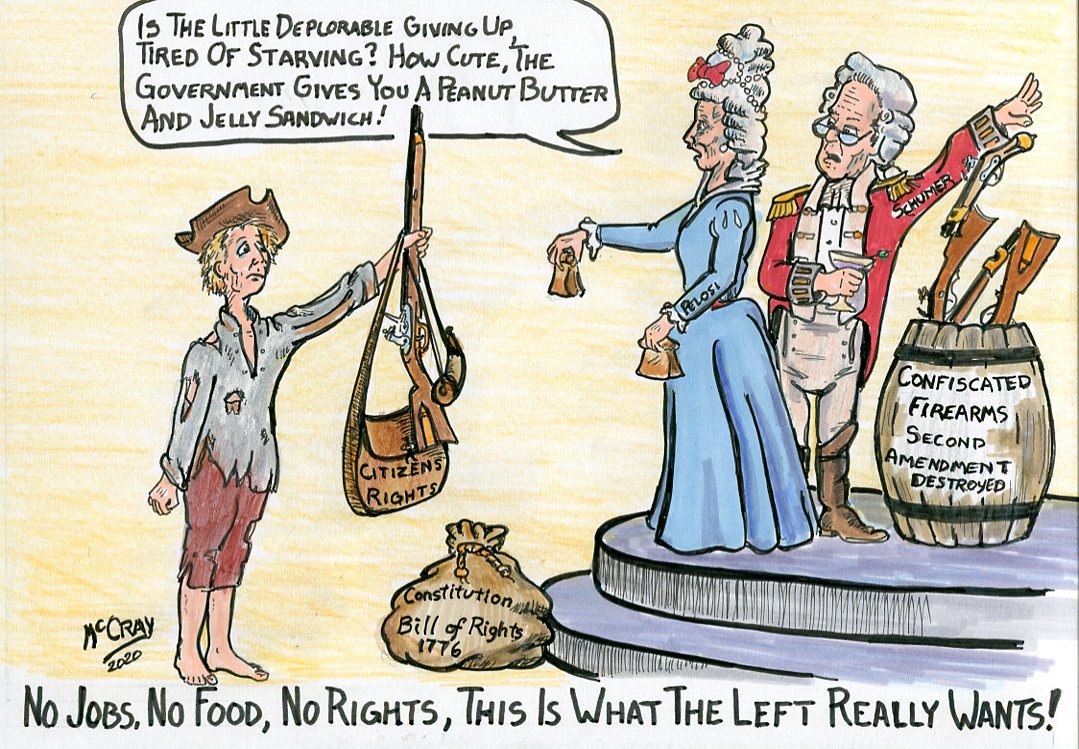 Those who have sought for a responsible way to handle the Chinese Coronavirus - COVID-19 are seeking to find that balance between reopening businesses and society in general. Those on the left are refusing to reopen society; it is their desire to keep the clamps on and keep excessive controls on society. To restate a well-worn phrase of Rahm Emanuel’s - “don’t let a crisis go to waste.” The socialist left see an opportunity in dragging out the shutdown. If they can succeed in causing businesses and the economy to fail, then President Trump can be blamed for the failure.

Many of the rules that restrict people’s movements are arbitrary and in many cases devoid of common sense. The State of Illinois will let you have only two people in a boat, regardless of the size of a family or the size of the boat. California will let you use a boat but you can’t fish from the boat. These ridiculous rules serve one purpose, they are all about control.

New York City, Mayor Bill de Blasio, one of the purveyors of excessive restrictive rules, doesn’t believe he is supposed to follow his own rules. While everyone is barred from using the gym, De Blasio thinks he’s special so it’s okay for him to use the gym. For those who think they are so much better than the next guy, the rules apply to everyone else. It’s arrogance which is a hallmark of despotic regimes. Those in control look down their collective noses at everyone under them as a stupid labor force. Reality shows you have to be stupid (or arrogant) to believe that you are better and more valuable than the next person.

Governments are refusing to allow businesses to reopen regardless of the virus level conditions and safeguards that will be practiced by the business. Those businesses that open earlier, the owners are arrested and imprisoned. Governors threaten to take licenses and then want to crush the impertinent owners by destroying their business. This is the behavior of dictators, not elected officials. In Michigan, the state legislature rebelled, filing lawsuits against the Governor of Michigan. Rules that may be needed for a city with a dense population, are not needed in the rural areas which have a low-density population. It’s the one-size-fits-all by people who can’t lead, whereas states with real leadership have differing rules for different areas.

Florida is a perfect example, Governor DeSantis targeted specific areas that were affected by outbreaks of the Chinese Coronavirus, especially in south Florida, placed under heavy restriction and teams were sent in to isolate those affected. Extra staff was added at nursing homes to separate those infected from the other residents in the nursing home. This action greatly reduced the mortality rate in Florida. In other states where the understaffed nursing homes were left on their own the mortality rate was much higher. In Massachusetts, the poorly staffed state-run Veterans' Home had 70 deaths out of 80 residents, which shows the difference leadership makes.

The socialists' method of ruling is by fear, oppressive restrictions, and with no rights for the general public. Rights are replaced by privileges and to have privileges you have to be a loyal party member.