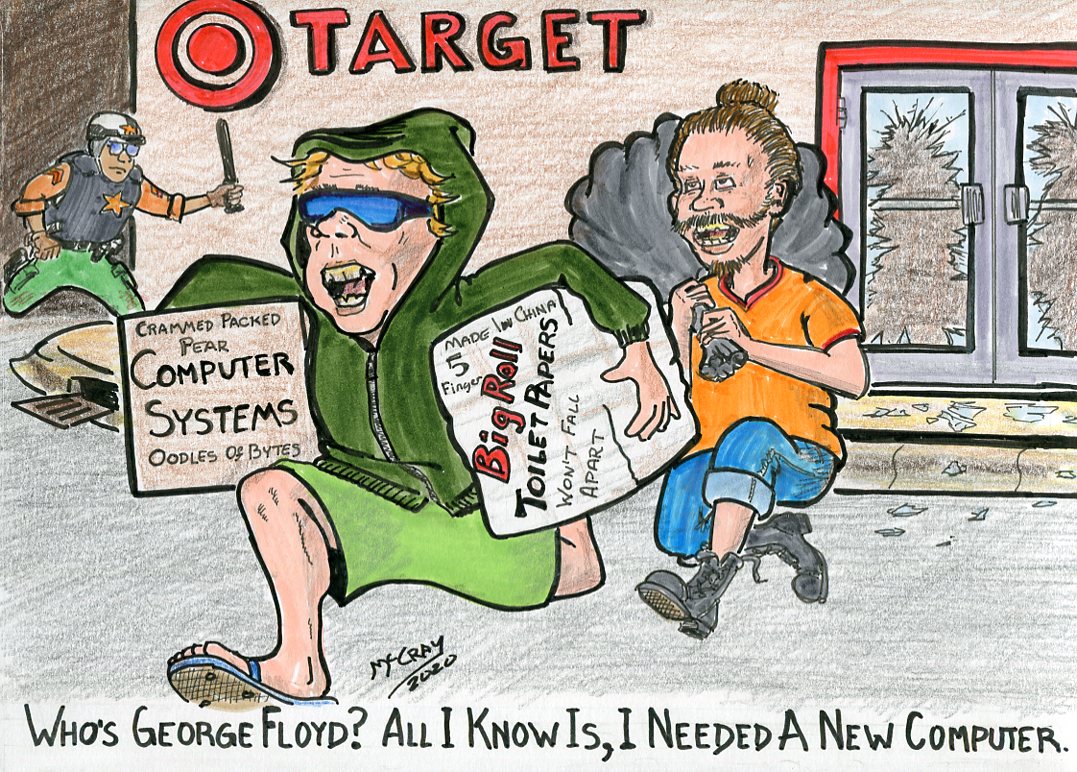 The video of the death of Minnesota resident George Floyd at the hands of Minneapolis Police officer Derek Chauvin has been seen around the world. The tragic death of George Floyd is being portrayed as a murder by a white racist cop, against the victim who is of African ancestry. George Floyd was arrested over a questionable $20.00 bill. The police officer as it turns out had worked with Floyd at a night club at one time; it’s not known if bad blood existed between the two. But, there seems to be more to this tragedy than a straight-up case of police abuse.

The death of George Floyd has rightfully resulted in protests. The problem is there are three groups that make up the overall protest. First, the legitimate protestors who are exercising their rights, voicing their displeasure with the situation as they see it. Second, the opportunists who break in and loot businesses for their own profit. Third is the most dangerous, the politically-oriented militants like ANTIFA who accompanied the protest for the purpose of destabilizing government by rioting, violence, and murder.

The militant behavior is by organized groups to create anarchy and violence, as well as the opportunistic looting, who are hiding behind legitimate protestors. One of the most identified of the groups is the ANTIFA (anti-fascist) - their claim is they are fighting against fascism. In reality, they are the very FASCISTS they claim to be fighting against. They are modeled after the National Socialist German Workers Party, brown shirt street thugs of NAZI Germany, and Italy’s black-shirted Fascist Party. Antifa is an organized group that primarily recruits on the colleges campuses and pushes extreme left-wing ideology, hating anyone who disagrees with them. They want a single party National Socialist government, they target anything and anybody that will further their goals.

According to the Geller Report 5/31/20, “Antifa is a revolutionary Marxist/Anarchist militia movement,” they receive their instruction through their website/blog. “At the August 17, 2019, rally in Berkeley, Ca, a large group of Antifa Marxists and anarchists candidly gave voice to their desire to permanently wipe the United States off the face of the earth.”

The promise by President Trump to declare Antifa as a domestic terrorist organization is completely justified, they are committing treason. Antifa is actively engaged in the insurrection and attempting to overthrow the government of the United States. Don’t be surprised if the names of some of the world’s bad actors such as China, Iran, and Russia pop up supporting some of the anarchy groups.

It seems that a lot of the lame and lackluster responses to protect the cities by their local and state governments appear to be related to election-year politics. The Democrats want to do anything to make the problems look like it’s all President Trump's fault. They want to force a military response from the President, so they scream that Trump is out of control. Don’t worry - the Democrats in the House are ready to investigate Trump for whatever happens.

Senate Resolution 279, dealing with Antifa’s domestic terrorism was created in July 2019 and went nowhere, it is getting a second look. Senator Kelly Loeffler of Georgia co-sponsored the resolution on 1 June 2020, to designating the Antifa militants as terrorists. It will be interesting to see if Nancy Pelosi and her crew of left-wing nuts support Antifa in an effort to undermine President Trump, or protect the United States. Either people supporting Antifa are ignorant of the danger that Antifa poses, or they know exactly what they are doing and agree with it. Don’t expect Nancy Pelosi and Chuck Schumer to oppose the violent rioters, because they are on the same side.