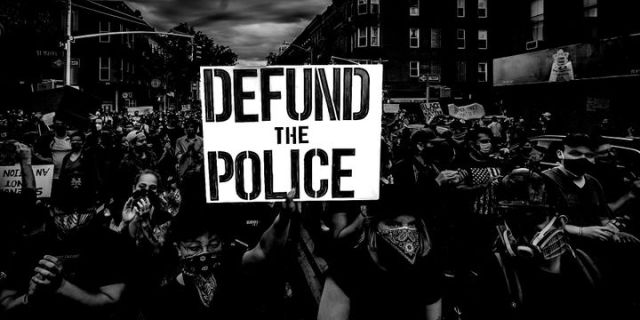 Oh no, wait…They want to replace police with “social workers.”

Why? Because they support calls for “significant, permanent reductions to existing policing and carceral infrastructures.” (1)

In other words, the Dems propose to keep you safer by getting rid of cops and jails. Well, I sure feel safer now - how about you?

And that’s not all. The Rolling Stone, that bastion of ‘Liberal Logic’ (Yes, I know, a complete oxymoron) has a half dozen solutions to living in a world without police.

Among these are, "Unarmed mediation and intervention teams,” and "The decriminalization of almost every nonviolent crime.” (2)

Wow. Imagine how comforting that would be when you wake up to a late-night home invasion and when you call 911, instead of the cops you ask the social worker if she could swing by tonight. Then the counselor on the other end will ask you, “Have they beaten or raped you, or will they just be helping themselves to your stuff?”

If the answer is, “No - not yet,” then the helpful social worker will suggest if you don’t want to be brutalized you should volunteer to show them where the silverware is and help them carry it out. Because after all, in Democrat America all nonviolent crimes have been decriminalized. Thus according to the DNC, you’re just the temporary caretaker of everything you own until the Dem social justice warriors can get around to looting it.

Ah - the brave new world of the Social Democrats. Doesn’t that sound like fun?

Oh, and by the way, you do understand now what the Dems have been so anxious to get rid of the Second Amendment? After all, we wouldn’t want any of their constituents getting hurt while they rob and molest you and your family. Because remember, according to Democrats, social justice only works one way - and it sure ain't’ the way of any hardworking, patriotic American.

Nope, what the Dems are trying to put in place is nothing less than putting all productive, law-abiding, self-sufficient, freedom-loving and independent America into chains of Democrat tyranny. They want us helplessly cowering behind locked doors living in fear of their lawless, violent mobs.

You see for Democrats freedom has always been a zero-sum game.

It was back 100 years ago when they used the terror of their KKK to deprive blacks of their rights just as they want to use that same brand of terror against freedom and the Constitution today.

But wait. I’ve got a much better idea.

How about if we tell the Dems we’ll give them just want they want. Pull all the cops out of your liberal cities.

Then empty the jails, disarm your citizens… and BTW Nancy, Chuckie, and Adam, that means no private security.

Then let all the professors, Media, Hollywood, and ‘beautiful people’ elites stand in the door of their mansions, concierge apartments, and gated communities (and of course those evil gates and walls will have to come down), and greet their rioters and looters with open arms and liberal platitudes.

You know what? I think that would work out best for all of us!