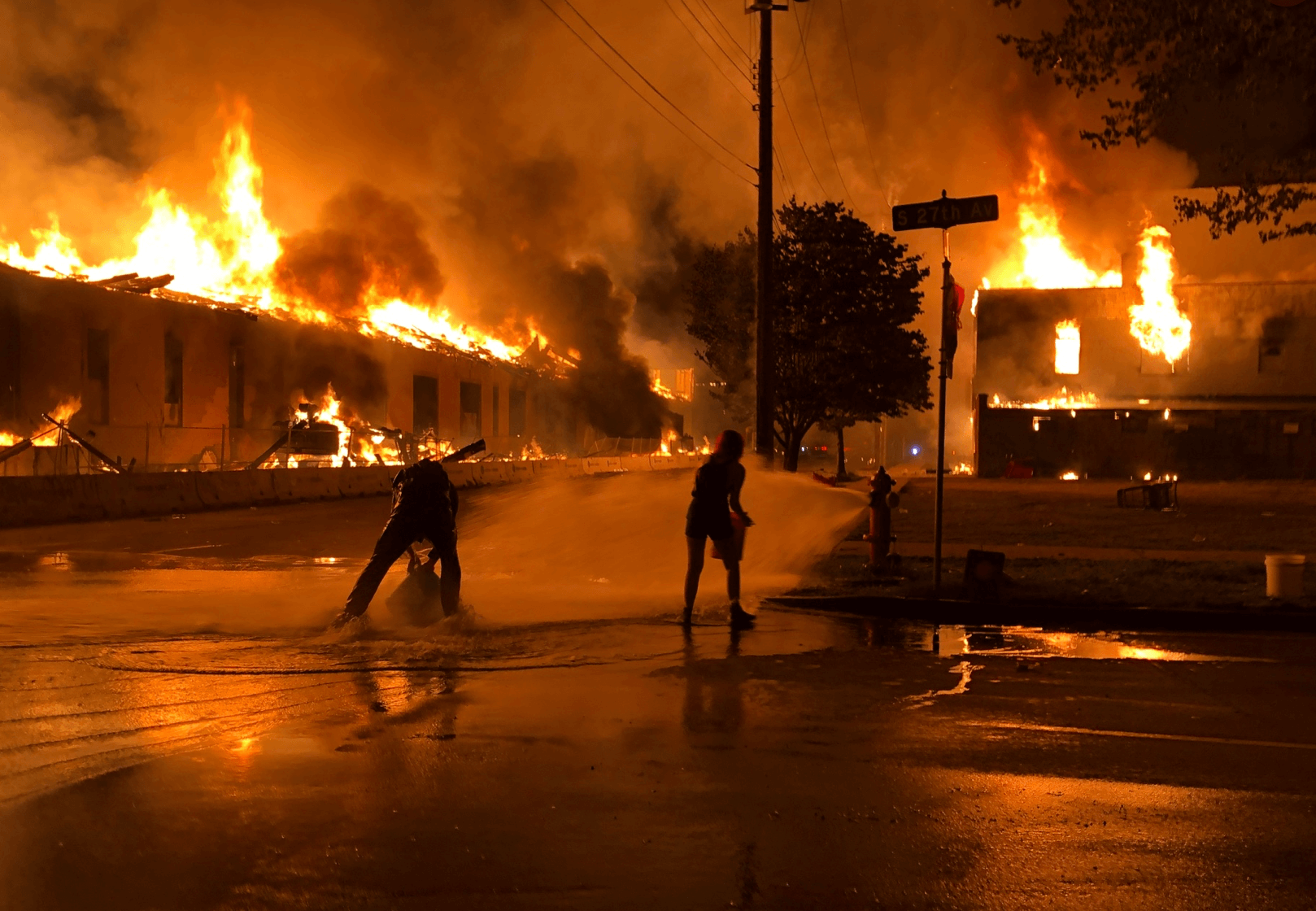 Black billionaire and New Age thinker Oprah Winfrey is hosting a show on her own network on Tuesday and Wednesday to demand more money for blacks. “What do we want?” the promotional ad says. “What are our demands?” Tune in to find out. Another black billionaire, Black Entertainment Television (BET) founder Robert L. Johnson, has already been on Fox News and CNBC making demands for $14 trillion of slavery reparations for blacks. That’s a lot of moolah.

None of this will contribute to unity in America. It will further divide America by generating a white backlash. Many whites resent special black privileges, such as affirmative action and special college scholarships.

Jared Taylor, author of the book, White Identity, dares to talk about whites as people with special interests of their own, separate from various minority groups, and his website, American Renaissance, is already welcoming new interest and readers in the wake of the black riots.

If President Trump does not condemn the push for reparations, some of his supporters will certainly abandon him. Meanwhile, members of the George Floyd family and their attorney Ben Crump are demanding U.N. intervention in the U.S. criminal justice system over the case. Floyd, a heavy drug user with a criminal record, died in police custody after he was apprehended for allegedly passing counterfeit money.  There is an indication he scuffled with police before being pinned to the street by one officer. Nevertheless, the officers at the scene were fired and face charges in Floyd’s death.

Some GOP Senators such as Mitt Romney are already bending to the mob, by “trying to craft legislation to change police practices and accountability following the deaths of black Americans at the hands of law enforcement,” as Newsmax put it. Yet police training has always been considered a local responsibility.

With demands to defund the police getting traction in some liberal cities, one group, Win without War, is participating in a June 20 “Poor People’s Campaign: A National Call for Moral Revival,” while declaring that “The police and the military operate on a shared bedrock of white supremacy that shields them from accountability for their violence and racism.”

Hence, the Armed Forces are the next institution to be defunded.

Democrat Joe Biden has been campaigning for president, mostly from his basement, as the peace candidate, and many people in the polls seem to think he can somehow bring unity to the country. But how? Other synonyms, just so you get the picture, are: cash, bread, cabbage, dough, notes, and wad.

Come on, Mr. and Mrs. America, don’t you want racial harmony in America?

More than half a million dead in a Civil War and $22 trillion on anti-poverty programs is apparently not enough.

The Minneapolis Star Tribune reports, “The city's first survey of property damage shows that nearly 1,000 commercial properties in Minneapolis were damaged during the riots, including 52 businesses that were completely destroyed and 30 other locations that sustained severe damage.” The damage was estimated to exceed $500 million.

With this in mind, the idea of having black billionaires like Oprah and Johnson move their homes and businesses to the Minneapolis inner city has been suggested.  Perhaps they can hire a few black people now out of work because their businesses were burned down.

Minneapolis is one of America’s most liberal cities, the New York Times tells us.

The Star Tribune reported that a Minneapolis manufacturing company, 7-Sigma Inc., has already decided to leave the city, “with the company's owner saying he can't trust public officials who allowed his plant to burn during the recent riots.” About 50 jobs are gone from this business alone.

The Star Tribune said a $37 million affordable housing development was burned to the ground. It was advertised as a six-story project that included 189 apartments, including 38 affordable apartments available to households earning 60 percent or less of area median income. The project was also supposed to include 8,600 square feet of ground-floor retail space. It’s all up in smoke.

The property is (was) near the Minneapolis Third Police Precinct. That, too, was destroyed. A 23-year-old security guard named Branden Michael Wolfe has been federally charged with aiding and abetting arson at the Third Precinct. He is white. Another white man, 28-year-old Matthew Lee Rupert, has been charged with civil disorder, possession of unregistered explosives, and participating in and organizing riots in Minneapolis. He came from Illinois.

Perhaps the subject of white agitators exploiting the death of a black man is something Oprah Winfrey will address in her shows. That’s an interesting racial angle. Or perhaps they can discuss the hate crime hoax case of Jerome Kevin Jackson, a 54-year-old black man behind anti-black racist graffiti on the campus of Salisbury University in Maryland. FBI, Maryland State Police, and local law enforcement agencies investigated the incident. They could have been used to crack down on black-on-black violence in Baltimore.

In Chicago, on May 31, there were18 murders in 24 hours, described by the Chicago Sun-Times as “the most violent day in 60 years in Chicago.”

Oprah Winfrey, whose show was once based in Chicago, has given away some of her money on “philanthropy” but has also spent a significant part of her $2.5 billion fortune on the seven estates she owns. A site devoted to luxury homes says, “…with homes all over the country, from an equestrian estate in Montecito, CA to rural farm property in East Maui, HI and a gorgeous, yet over-the-top $14 million mansion in Telluride, CO, she [Oprah] has plenty of places to call home. However, it’s her large estate in Montecito, often referred to as the Promised Land, where she can most often be found.” This particular home is valued at $90 million.

Perhaps he will consider moving these businesses to Minneapolis. Come on, Mr. Johnson, put your money where your mouth is.

Needless to say, Oprah isn’t going to have any black conservatives on her special programs on Tuesday, June 9, and Part 2 on Wednesday, June 10 at 9 PM ET. Her guests, “leading figures in the Black community,” will include Stacey Abrams, Ava DuVernay, Keisha Lance Bottoms, David Oyelowo, and Rashad Robinson, president of Color of Change, described as the nation's largest online racial justice organization. It is a spin-off from the Citizen Engagement Laboratory, a group heavily supported by the George Soros-funded Open Society Foundations.

The latter is now calling for Netflix to remove all cop shows from the streaming platform because they “heroize” police. It says “…we know from what’s going on in our country that police are not heroes.” In response to the announcement from the Minneapolis City Council that they plan to defund the Minneapolis Police Department, Robinson issued a statement in agreement and saying that “Policing is a violent institution that must end.”

The long hot summer predicted by the Party for Socialism and Liberation is just getting started. “Nothing short of communist revolution will change society,” says the Progressive Labor Party.

Pay up, kneel down, and beg forgiveness, and maybe your life will be saved. The choice is yours, America.