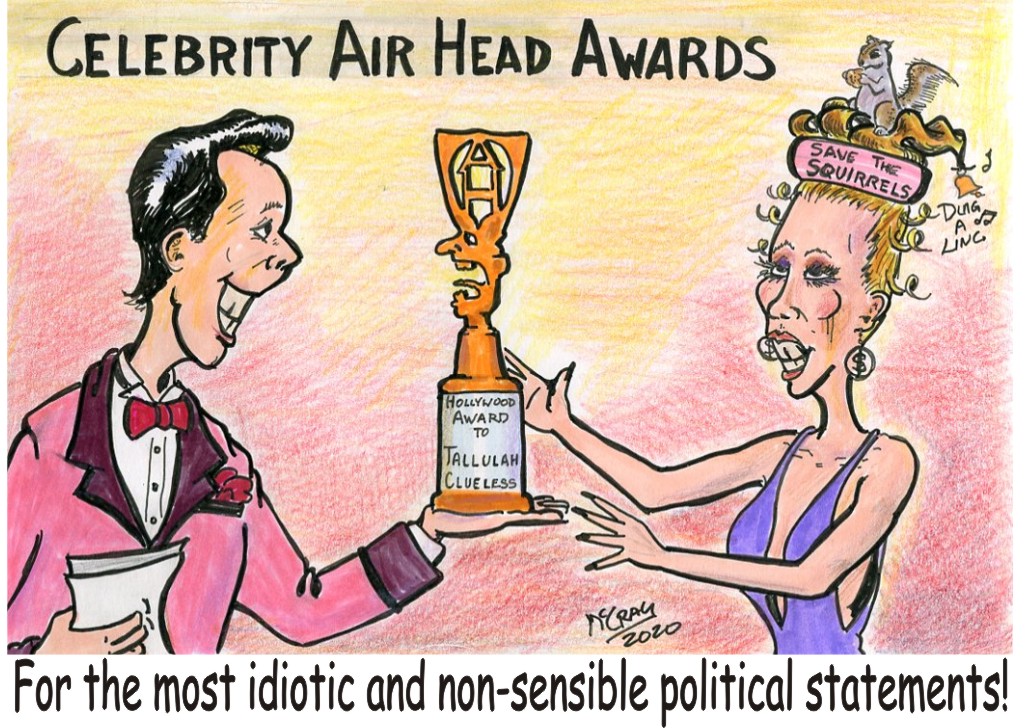 Leave it to the brain trust that is Hollywood, those professional chameleons better known to the public as Hollywood stars and news media celebrities. They are always enlightening the public on the proper way of living our lives. How is it that most of these people who can’t even run their own lives, get off telling the rest of the country how to live. We have heard everything from crocheting medical filter masks for the Chinese COVID-19 Virus to hurricanes are being caused by Donald Trump. Where do these people get their wealth of knowledge, or are they simply parroting anything that will please the ruling class in Hollywood? Of course we can count on Hollywood and news media celebrities to jump on the protest bandwagon following the death of George Floyd in Minnesota. Supporting the rioting and looting as just protesting, along with the violent political extremism. All of this is designed to do one thing, divide the country, demoralize and demonize those who want to preserve the United States, and promote those who are trying to destroy the country.

These celebrities and their left-wing propagandists in the news media have appointed themselves as judge, jury, and executioner. If someone who believes in the Constitution and the Rule of Law stands firm on an issue, the self-appointed jump on the unfortunate individual like a pack of hyenas. The propagandists in the left’s news media make sure they beat that drum for days on end to push their view. If anyone on their side screws up, as in they got caught, it’s 'oh well, that’s ok, they’re one them,' and the offense is ignored, equal justice no longer exists.

What is baffling is the number of people who look up to these stars for guidance, especially the under-thirty crowd, who derived everything from a cell phone and the internet. Remember, if it is on the internet, it must be true, just ask the internet’s creator Al Gore.* With the left-wing politicians, leftist school teachers, and college professors, the internet and left-wing news media spewing propaganda and flat out lying, it is fully understandable why young people lean left. And the ones that have been indoctrinated in socialism, see themselves as great Marxist Revolutionaries, when in fact they are fools and tools being used. To the left anything they consider as a problem, is all Donald Trump’s fault.

How is it Donald Trump’s responsible for any of this mess? Trump wasn’t in Minnesota where the George Floyd tragedy occurred. He has acknowledged from the start that what happen to Floyd was wrong, and he has supported the right of the people to peacefully protest. Or is he being called a racist, because he didn’t support the looting and the insurgency? Aimed at the overthrow of the government, that has been caused by anarchist groups like Antifa. Maybe, it has to do with Trump’s stated intention to declare Antifa and related groups "domestic terrorists."

These are the people wanting to defund police departments, which is anarchy, no law enforcement, it’s a thief’s dream. The left has this idea that all of this is going to harm President Trump’s chances for re-election. The only danger to Trump being re-elected is wholesale cheating at the ballot box.

The situation in many cities, including Washington D.C., was severe enough to call in the National Guard. President Trump mentioned the possibility that federal troops many need to be deployed under the Insurgency Act to stop the violence. The left-wing press went nuts - Trump is sending in combat troops, Trump is seizing control of the government! The Old Guard that handles ceremonies at Arlington National Cemetery, was dressed in full battle rattle to prevent vandalism, was accused of having standing orders to shoot to kill! In reality, there are no "shoot to kill" orders, any federal troops that might be needed would have come from U.S. bases in Germany, not from the middle-east.

The only thing that is being proven, is the states and cities run by the socialists in the Democrat Party, are being wrecked by riots and their local businesses are destroyed.

*Al Gore famously told the lie several years ago, that he had created the Internet.