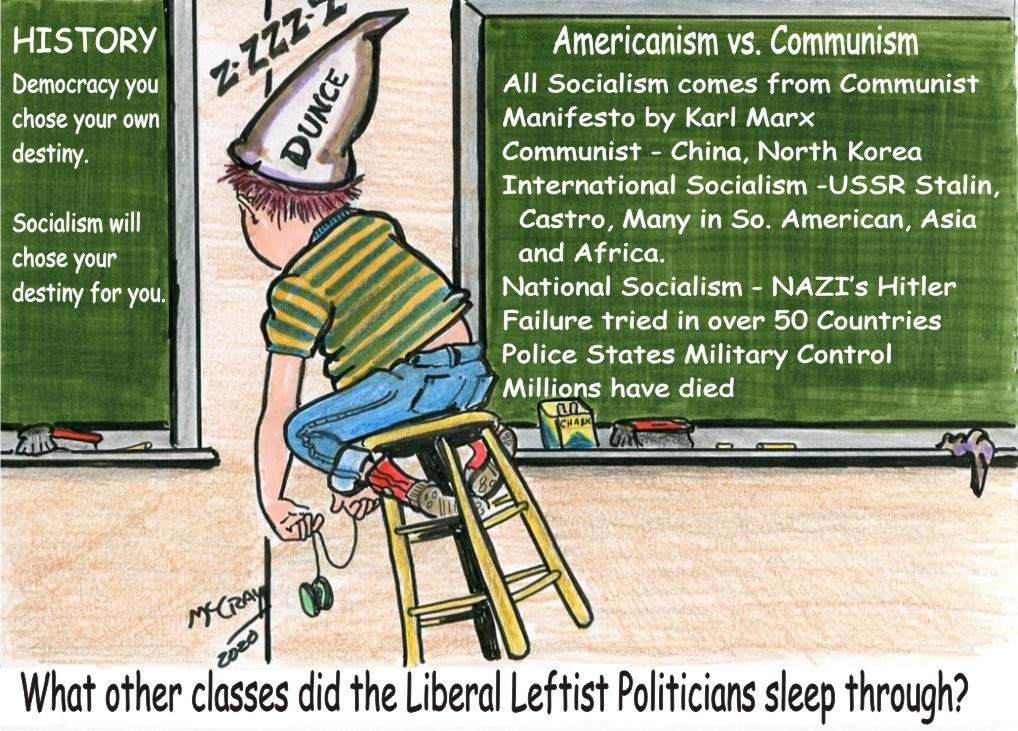 Americanism vs. Communism was the class that compared American freedoms against the totalitarian slavery of the Communist and Socialist police states. It was required in junior and senior high schools throughout the 1950s to the 1990s. The absence of this class is one of the reasons why most of the younger generations know nothing about the dangers of communism and socialism. The collapse of the USSR (Russia) in 1991 was used by many of the highly educated left-leaning educators as the reason to eliminate the class. This leaves the door wide open for the subtle indoctrination of students by the same left-leaning educators.

If there was ever a class that should be taught nation-wide on a mandatory basis, it is ‘Americanism vs. Communism.’ It is completely reasonable for Americanism to be taught, how the country came to be, and our history good and bad. The fundamental structure of how the U.S. government is supposed to work is showcased. As usual, you can expect many states that are run by the socialists in the Democrat Party will refuse to cooperate. As in the past, federal funds can be withheld until rogue states get the message.

The reason the leftist states operate as they do is because of the ignorance of the public. The Constitution and Bill of Rights, Civics must be taught to students in all grades from 1st grade through the university level. It is the foundation that our country has been built on, we can see the result of failing to teach the youth with today’s anarchy. The left has always criticized the founding fathers for not being perfect, therefore they should be ignored. First off, no one is perfect and that includes the leftists making the criticism.

The failure to educate the youth and general public is why socialism has gained traction in our society. It has always been a fringe anarchist group that got its big push back in the 1920s from the Soviet Union which was pushing International Socialism. The indoctrination of socialism took hold in the liberal universities that have educated generations of teachers, this is why we have students who are ignorant of our history.

In many states, a teacher with conservative views can’t get hired. A relative of mine found that out in Massachusetts and had to go to a private school for employment. Teacher applicants had to answer questions the ‘left’ way and write an essay with a tilt to the left. Ever watch a teachers' protest where all are wearing red shirts, parading with raised clenched fists, shouting socialist slogans. These are the fools who are responsible for teaching the youth in our public school system.

A June 17, 2020, article by Caleb Parke of Fox News, indicated that some of the radical organizers of the group CHOP which is holding Seattle hostage were interviewed by Documentary Filmmaker Ami Horowitz. One of their leaders, Jaiden Grayson stated, “I’m here to disrupt until my demands are met, you cannot rebuild until you break it all the way down,” that they would not stop until their demands are met “by any means necessary.” Grayson wants the cops to turn in their badges, others want the prisons emptied, abolishing the police, the courts, and the justice system. Essentially, they don’t want any organization that holds people accountable for their bad behavior. It is a collection of dangerous idiots, Horowitz referred to the group as “a Confederacy of Dunces.” This is the result of the socialists operating in our education system.

On 16 June 2020, Sen. Tim Kane (D) of Virginia, proved the point of ignorance when he declared that slavery started in Virginia. He is either ignorant and doesn’t know or conveniently forgot, slaves were brought to North America, as slaves. First starting with the Spaniards, then the Dutch, and finally with the English. Virginia was an English Colony, governed by the English Crown which had legal slavery and indentured servitude. Sen. Kane is a classic example of what is wrong with the so-called Democrat Party.

The Democrat Party, which seems to be led by Socialists, the corrupt malcontents and fools who are set on the total destruction of the greatest country that has ever existed in the world. The only way to stop later generations from jumping down the same rabbit hole and buying into the lunacy of the left is education.

Gandhi said you must be the change you want to see in the world.