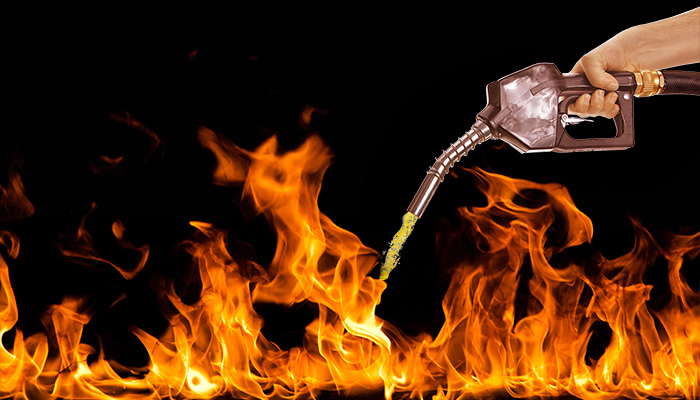 In our country, one of our guaranteed rights as citizens is "The right of the people peaceably to assemble..." which goes hand in hand with the right of freedom of speech and religion (First Amendment). If you're going to speak, it would be great to be heard. Inherent in these rights is understood that others have the right to either agree or disagree with what is being said. But that doesn't mean that what someone disagrees with should not be said, or that they have no right to say it - even if one gets supremely offended by what is said.

Peaceably...that is a key word. We do not as individuals or groups have any right to start destroying things or attacking people just because we want to be heard. If we take it upon ourselves to try to force others to hear us, by damaging things whether public or private or attacking people, we stand a good chance of bringing consequences upon ourselves. This can come in the form of public recourse, with the police coming to the aid of those being attacked. Or it can possibly be the result of self-defense used against us, protected of course by the Second Amendment.

I really doubt if the vast majority of our nation's population have ever really read and understood the Constitution or the Bill of Rights. Sure we passed a test in 8th grade or high school, we studied just enough to get us through. But what do we carry into adulthood? What do we share with our kids and neighbors? What do we demand of our "representatives" in Congress, whether national or state?

Generally, I am an optimist, but I am also a realist. Looking at our country right now I can get somewhat discouraged. I long to hear more of what I would call common sense and decency - sensible, honorable, honest, and respectful discussion filled with content and character concerning problems and issues we face as a nation.

With the extreme polarization that we see in our country right now, perhaps greater than ever in history, it seems that we as a people are degenerating in our ability and desire to work together as a whole people. There are two major factions and numerous sub-factions, and it just doesn't seem we can in any way come together. Each side feels they are right and the other side is wrong - to the max, "times infinity," as kids say.

Too often these days what I hear amounts to any or all the following: One of the best answers for our country right now would be a respectful, honest discussion of the many problems at hand. It seems to me that most people either don't want or are not equipped for such a process as a humane and reasonable discussion. Sadly, this is most profoundly seen in many of the people who are in positions of "leadership" in our government. And the national media corporations are among the worst culprits in exacerbating the divisions in our country, as they not only take sides but seem also to irritate, aggravate, and even escalate the divisions we see.

This whole matter of problem-solving is discussed in the Declaration of Independence. It is truly fascinating to read, and you can read it here. (1) If we have trouble with the governing authorities, with how "they" are doing the job of government, we citizens have the right/duty to correct it however we can! The same is true of a people who see the need "to dissolve the political bands which have connected them with another (group of people)." This is what we seem to see in Seattle in an armed takeover of part of the city recently. But now what are they going to do?

This extreme form of solving political problems can even mean the taking up of arms against a tyrannical government if it finally comes down to it. If it does, then whoever is doing the uprising had better be sure they are prepared for what they are starting! It would be far better and far less deadly for us all to hash it out with discussion, rather than by the taking up of arms in any form of a civil war. The last one cost over half a million lives!

Unfortunately, so many of those decrying our collective problems don't really seem to have any real and lasting solutions for those problems. That is when anarchy sets in. It's like a little kid who packs up a bag and moves out or runs away from his parents' house - but he doesn't have a clue where he will go or what he will do, but at least he will be free from their overbearing, unfair ways they are ruining his life! Just try to go start and run your own country!

Over and above, and in spite of everything that I see, I trust that God is good, that His love is for all, and that He will help us through all that we see happening right now. Mankind has been through all sorts of trials, even major and worldwide. God has made it quite well through all that mankind has done with His creation. There is no real divine guarantee that there won't be some pain and anguish in the process. In fact, quite the opposite. But God promised us He would be with us, and He would guide us - we just need to be sensitive and receptive to His leading, His love, His plan for our lives. It starts by loving one another...