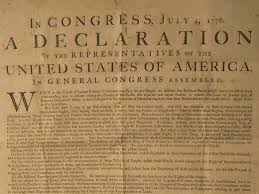 Hopefully you have already read Part I of this short series. It's not necessary to read that to benefit from Part II, but if you would like to read it, here is the link:
The Real Meaning of the Declaration of Independence, Part I

Now let’s continue with the the Preamble of the Declaration of Independence.


The rest of this paragraph reinforces the priority of the government to protect the three unalienable rights.

“That to secure these rights, Governments are instituted among Men, deriving their just powers from the consent of the governed. That whenever any Form of Government becomes destructive of these ends, it is the Right of the People to alter or to abolish it and to institute new Government, laying its foundation on such principles and organizing its powers in such form as to them shall seem most likely to effect their Safety and Happiness.

Prudence, indeed, will dictate that Governments long established should not be changed for light and transient causes; and accordingly, all experience hath shown that mankind are more disposed to suffer while evils are sufferable than to right themselves by abolishing the forms to which they are accustomed.

But when a long train of abuses and usurpations, pursuing invariably the same Object, evinces a design to reduce them under absolute Despotism, it is their right, it is their duty, to throw off such Government and to provide new Guards for their future security.

Such has been the patient sufferance of these Colonies; and such is now the necessity which constrains them to alter their former Systems of Governments. The history of the present King of Great Britain is a history of repeated injuries and usurpations, all having in direct object the establishment of an absolute Tyranny over these States. To prove this, let Facts be submitted to a candid world.”

First, the government is formed to protect unalienable rights, not to take them away. One way the government takes away these rights is by becoming too big. Simply put, the bigger the government gets the fewer freedoms the people enjoy. The federal government will always try to convince you that they will provide you with more security. However, the real truth was probably best stated by Declaration signer Benjamin Franklin when he said:

“He who would trade liberty for some temporary security, deserves neither liberty nor security.”-Benjamin Franklin

It’s clear to see in the Declaration of Independence that if the government gets too big, it should be altered or abolished, albeit slowly. So here’s something we must always remember:

Always remember, BIG government is your enemy, not your friend.
Next, the signers state that they have been patient with their current government, but can no longer tolerate such tyranny and oppression. Then, in the body of the Declaration, they list (in the form of grievances) the oppressions inflicted against them. We’re not going to list all 27, but they constitute the proof of the right to rebellion. Those grievances include, but are not limited to, taxation without representation, searches and seizures without probable cause, the confiscation of firearms, and in Ben Franklin’s own words, “The inability of the Colonists to issue their own money out of the hands of King George III and the international bankers, was the prime reason for the Revolutionary War.” Unfortunately, the apple doesn’t fall far from the tree because these same concerns plague us today with our current federal government.

Perhaps Abraham Lincoln said it best when he said:

“This country, with its institutions, belongs to the people who inhabit it. Whenever they shall grow weary of the existing government, they can exercise their constitutional right of amending it, or exercise their revolutionary right to overthrow it.”
-Abraham Lincoln

Perhaps Lincoln was inspired by Jefferson to make those remarks because Thomas Jefferson said this:

“Whenever any form of government becomes destructive to these ends – life, liberty, and the pursuit of happiness – it is the right of the people to alter or abolish it, and to institute new government.”-Thomas Jefferson

Let’s continue reading from the Declaration of Independence. At the end of the grievance portion, the founders again state their patience with their oppressors.

“In every stage of these Oppressions We have Petitioned for Redress in the most humble terms: Our repeated Petitions have been answered only by repeated injury. A Prince whose character is thus marked by every act which may define a Tyrant, is unfit to be the ruler of a free people. Nor have We been wanting in attentions to our British brethren.

We have warned them from time to time of attempts by their legislature to extend an unwarrantable jurisdiction over us. We have reminded them of the circumstances of our emigration and settlement here. We have appealed to their native justice and magnanimity and we have conjured them by the ties of our common kindred to disavow these usurpations which would inevitably interrupt our connections and correspondence.

They, too, have been deaf to the voice of justice and of consanguinity. We must, therefore, acquiesce in the necessity which denounces our Separation and hold them, as we hold the rest of mankind, Enemies in War, in Peace Friends.”

Here’s how we could best sum up this part of the Declaration of Independence:

The main objective of the Declaration of Independence is to expose and resist government tyranny.

“Resistance to tyranny becomes the Christian and social duty of each individual.”
-John Hancock

Notice the last phrase in the paragraph: “enemies in war, in peace friends.” With that statement, the signers were obviously looking for a win-win situation with Great Britain. The emphasis, directed towards King George III, who violated Gods laws, gave rise to a motto during the American Revolution: “No King but King Jesus.” This motto again highlights the signer’s focus on the threat from Great Britain to take away their religious liberties.

The government of the Kingdom of God should always trump any man-made government, no matter how good that government seems to be. This was part of the original intent of the Declaration’s signers.

Well, we’ve arrived at the Conclusion in the Declaration of Independence. The signers assert that there exist conditions under which people must change their government because they have produced such conditions, and by necessity, the colonies must throw off political ties with the British Crown and become independent states.

“We, therefore, the Representatives of the United States of America, in General Congress assembled, appealing to the Supreme Judge of the world for the rectitude of our intentions, do, in the Name and by the Authority of the good People of these Colonies, solemnly publish and declare, That these United Colonies are, and of Right ought to be, Free and Independent States; that they are Absolved from all Allegiance to the British Crown and that all political connection between them and the State of Great Britain is and ought to be totally dissolved; and that as Free and Independent States, they have full Power to levy War, conclude Peace, contract Alliances, establish Commerce, and do all other Acts and Things which independent States may of right do.

And for the support of this Declaration, with a firm reliance on the protection of divine Providence, we mutually pledge to each other our Lives, our Fortunes, and our sacred Honor.”

I want you to notice two phrases, “Supreme Judge of the world” and “divine Providence.” These two phrases refer to God, and they acknowledge that the signers relied heavily on biblical truth as the basis for what they wrote to King George. Perhaps their attitude was one of not wanting to revolt because they knew it would cost lives, and that certainly isn’t God’s will.

The 56 Founding Fathers took their pledge seriously, as they acknowledged God as their Protector. On the morning of the signing, there was silence and gloom as each man was called up to the table of the President of Congress to sign the document, knowing that it could mean their inevitable deaths. To lighten the weight of the moment, Benjamin Harrison said to Elbridge Gerry as they both signed the Declaration of Independence:

“I shall have a great advantage over you, Mr. Gerry, when we are all hung for what we are now doing. For the size and weight of my body I shall die in a few minutes, but from the lightness of your body you will dance in the air an hour or two before you are dead.”

With their signatures, all 56 signers made a silent declaration – we mutually pledge to each other our lives, our fortunes, and our sacred honor. In other words, they were willing to lose everything, and even die for the cause. Even though they prevailed in victory, many of the Founding Fathers suffered hardships and losses for what they believed.

The Founding Fathers believed in life, liberty, and the pursuit of happiness to the point of death.

The first and most famous signature on the Declaration of Independence was that of John Hancock, President of the Continental Congress. Two future presidents (Thomas Jefferson and John Adams) and a father and great-grandfather of two other presidents (Benjamin Harrison V) were among the signatories. Edward Rutledge (age 26) was the youngest signer, and Benjamin Franklin (age 70) was the oldest signer.

According to a popular legend surrounding the Declaration, John Hancock signed His name largely and distinctly so King George could read it without his glasses. While that may or may not be true, it is true that one of colonial America’s most ardent revolutionaries put his life on the line with his signature. If the revolution was lost or if he was caught, he would have been hanged in death.

Have you ever wondered what happened to the 56 men who signed the Declaration of Independence? According to tradition, five were captured by the British as traitors, and tortured before they died. Twelve had their homes ransacked and burned. Two lost their sons serving in the Revolutionary Army, another had two sons captured. Nine fought and died from wounds or hardships of the Revolutionary War. All 56 pledged their lives, their fortunes, and their sacred honor.

When the authors of the book, The Day America Told the Truth, took polls in the early 1990s asking people which beliefs they would die for, 48 percent said “none.” Only 30 percent would die for God and their faith, and fewer still would die for their country.

In light of current opposition to biblical truth here in the United States, the question becomes:  Can we re-capture the original intent of our Founding Fathers? John Adams said it this way:

I’ll close with this: Think for yourself and use common sense. Have the guts to speak up for what you believe by speaking the truth in love, voting for biblical principles and by always voting against big government. This was certainly part of the original intent of the 56 signers of the Declaration of Independence.