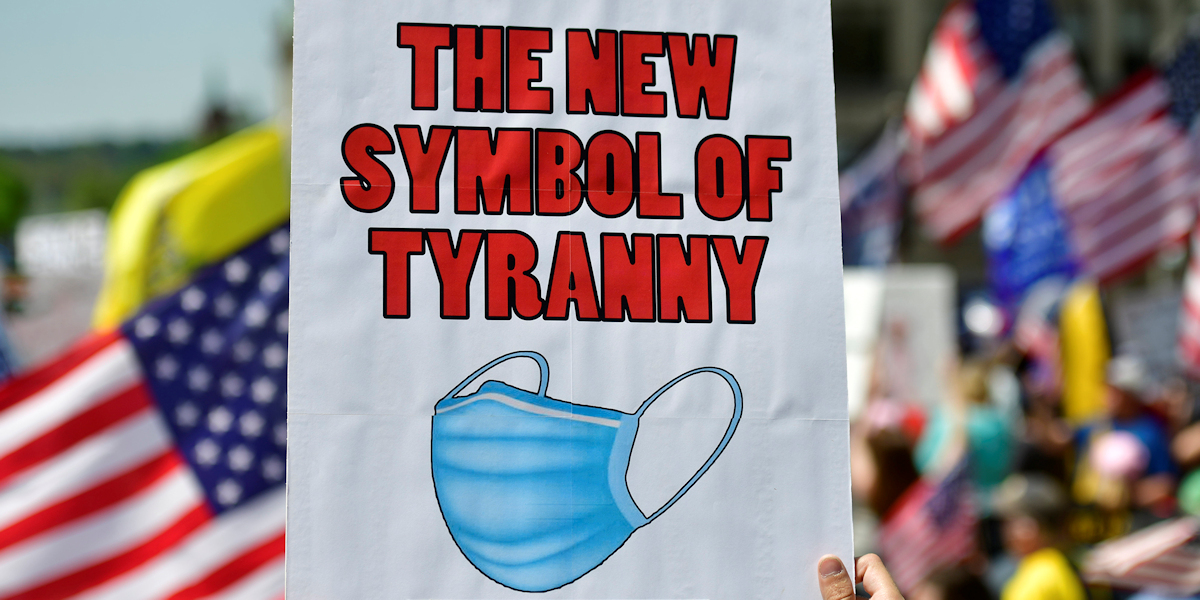 This past weekend theblaze.com reported, “A woman has gone viral after reportedly pepper-spraying a couple having a picnic in a San Diego, California, dog park — allegedly because they weren't wearing face masks while eating their lunch.” The masked woman called the couple “idiots” and stuck up her middle finger at the two dining before deploying pepper spray at them and their food. She apparently felt force was necessary to keep others “safe” from the mask-less couple.

This begs the question: is there a connection between the woman at the dog park and the governors' behavior since March?

One reason that we have legislatures making the law is because lawmaking needs to be a deliberative process. When “law” is dictated by one person it is subject to capricious, emotional, and contradictory results. Therefore, if a governor in a statehouse takes it upon himself to tyrannize others, why shouldn’t a woman in a dog park do the same thing?

The elderly woman’s emotional, over-the-top assault on the rights of others was modeled for her by the governor because lawlessness breeds lawlessness.

We have given authority to a tiny minority of governors who are taking advantage of the good nature and self-sacrificing predisposition of the American people. These governors currently feel it is their duty, like the woman at the park, to bully citizens who are not wearing a mask.

The tragedy of COVID-19 is that there is not even one law that has required this behavior. We have been defrauded into complying with mandates, not law. If there were any such face-mask laws, it would be the result of a constitutional legislative process whereby both houses of the state legislatures voted on it favorably.

If it then receives the governor’s signature it would become law provided it did not violate the United States Constitution, the state Constitution, or the higher Moral law.

Many governors have issued executive orders regarding the wearing of face masks. They claim they have the authority to do so pursuant to some variation of “Emergency Powers” legislation passed by their state legislatures. These rogue governors further claim that his/her orders are “law” or have the “force of law.”

This is not accurate for at least three reasons:

Firstly, neither the statute on which the governor relies nor any other statute which pretends to give him the authority to make law, are valid. Lawmaking authority is vested in the legislative branch and cannot be “delegated” nor transferred in any way to the executive branch.

Secondly, the legislature cannot, by means of “pretended” legislation, confer upon the governor “pretended” authority which supersedes the limits on his authority established under their state’s constitution.

Thirdly, executive orders, which are otherwise valid, apply only to those in the executive branch of government, not to the general public.

For these reasons, there exists no “law” requiring the wearing of face-masks. Statements made by government officials or media or businesses to the contrary are inaccurate and misleading.

This is probably why Walmart, CVS, Walgreens, Home Depot, Lowe's, and other nationwide retailers said they would serve customers even if they violate mask mandates, according to CNN.

These wise corporations understand that defending a mandate that is not law is irresponsible and harmful to their companies.

In conclusion, any business enforcing these mask requirements claiming them to be law is improperly restricting the freedoms of the citizens of their state with no lawful basis to do so.