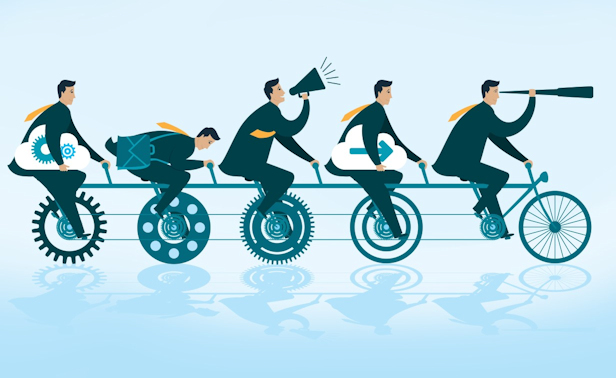 A mother looked out a window and saw Bryson playing church with their three kittens. He had them lined up and was preaching to them. The mother turned around to do some work.

A while later, she heard meowing and scratching on the door. She went to the window and saw Bryson, baptizing the kittens. She opened the door and said, "Bryson, stop that! You'll drown those kittens." Bryson looked at her and said with much conviction in his voice, “They should have thought about that before they joined the church.”

Well, you might say that in this story, Bryson was really into 'task,' but not too much into 'relationship.' Just ask those kittens. We see this all the time. Someone wants to climb the corporate ladder and doesn’t care what they do or who they destroy to get there. A politician wants to win so badly that they spin the truth, sell themselves to an interest group, and employ hate speech on TV against their competition.

Life consists of both relationship and task. Adam and Eve are great examples of the principle of 'relationship' and 'task.' "And God created man in His own image, in the image of God He created him; male and female He created them. And God blessed them, and God said to them, 'Be fruitful and multiply, and fill the earth, and subdue (govern it wisely) it.'" Genesis 1:27-28.

God made male and female to be fruitful and multiply. They were given equal status but different roles to accomplish what God desired ‘them’ to do. Notice God taught Adam and Eve about the right relationship before they were given any task. He gave them the assignment of learning how to become "one flesh." The two became one, and the one became many. Out of their relationship came a family. That family filled the earth.

Then after the relationship was established, God gave them a mission or what I call task. God charged them with subduing or properly governing the earth.

Why did God establish the idea of a relationship first, and task second? Because it's God's divine design. It has the power to take the raw material of what is given to us and turn into something greater than us.

Here’s the principle in three words: agreement, unity, abundance. You need to have two different individuals to agree or what I call, 'two or three to agree.' That comes from another Bible verse. When two separate parties agree, the result is unity. When those parties dwell together in unity, there the Lord commands a blessing. Psalm 133. Unity creates the power to operate in a marriage, a business, a nation, a community, a family, etc.

Let's summarize it. Here's the order of creation: The two become one, the one becomes many, and the many do work (task): first agreement, then unity, with the result being abundance (multiply and fill). Out of relationship comes task. Relationship, then task, is not just a marriage principle. It's an insight into the power to create and govern. Look at businesses in America. Ten percent of the businesses are corporations, and 90% are sole proprietorships. However, 10% of the businesses, corporations, have 90% of the sales and profit. Why? They are corporate; they cooperate; they multiply; they have more than a measure of grace. They have grace without measure.

There are four ways for people and organizations to live out their lives. The first style is 'high relationship/low task.' This style loves everyone but achieves little. It's well-meaning but does not have the power to effect change. Then there is 'low relationship/high task.' The task becomes everything. Real relationships get in the way of what they want to accomplish. People's skills and contributions tend not to be valued. Then there is 'low relationship/low task.' This style dislikes or judges everyone and gets nowhere. Enough said on that style.

The final way of living is 'high relationship/high task.' That's what made Jesus different in a significant way. Most successful people and organizations have gleaned this truth also. They finish the job well, build their marriage, team, or country with people of different talents and perspectives, and still get along. Opposites attract and then negotiate the differences if you understand the value of relationships first. Life is a celebration of differences, not just toleration of differences. We have lost that truth in today’s adversarial world.

Just think, right from the first days in the Bible, God said, ‘teamwork makes the dream work.’ How about you? Which of those four styles are you? Hint: None is us is as great as all of us if you want to have a quality of life and get something done.