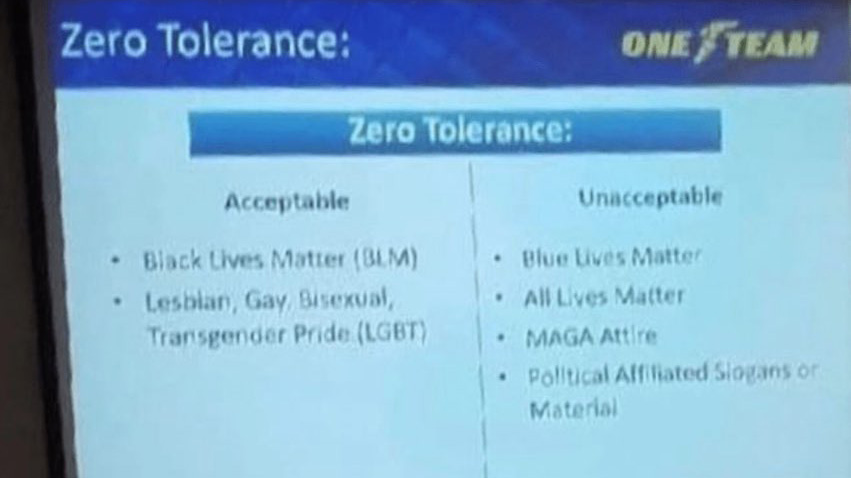 The Goodyear Tire and Rubber Company is headquartered in Akron, Ohio, where it was founded in 1898. Since that time, it has grown to be a massive corporation with operations all over the world. Today, it is the third-largest tire company in the world with 63,000 employees. In addition, Americans have become accustomed to seeing one of the nine Goodyear Blimps at major sporting events across the country.

Unfortunately, this company with a very patriotic image is led by left-wing activists who are doing their best to squelch free speech, especially if it is promoting conservative causes.

This week, audio from an instructor and a slide from a diversity training demonstration at their facility in Topeka, KS were leaked on social media. In a discussion of the company’s “zero tolerance” policy, an unnamed area manager declared that wearing clothing for certain causes was “acceptable” but for others it was “unacceptable.” Among the “acceptable” causes were “Black Lives Matters” and “LGBT” pride; however, “unacceptable” causes included “All Lives Matter,” “Blue Lives Matter,” and “MAGA Attire.”

The employee who leaked the slide said that the instructor claimed the “zero tolerance” policy emanated from corporate headquarters. The unnamed employee was fearful of being fired, so remained anonymous. This courageous whistleblower claimed the policy was “discriminatory” and clearly did not like the left-wing bias of the training seminar, and leaked portions of the presentation.

Once the policy was revealed, there was an outcry on social media from supporters of law enforcement and President Trump. This led to an initial statement from Goodyear representative Melissa Monaco that the company allows employees to “express their support on racial injustice and other equity issues but ask that they refrain from workplace expressions, verbal or otherwise, in support of political campaigning.”

Her statement did not quell the criticism; instead, it intensified. Soon thereafter, the Chairman, CEO, and President of Goodyear Tire and Rubber Company, Rich Kramer, clarified the official corporate position. He said, “The slide in question was created by a plant employee to try to explain what is acceptable to wear in the workplace. The slide was not approved or distributed by Goodyear Corporate or anyone outside of that facility.”

He emphasized their ban on political statements by noting that “We have a longstanding corporate policy that asks associates to refrain from workplace expressions in support of any candidate or political party.” However, he said, “I deeply regret the impression” that was created regarding law enforcement. According to Kramer, “We have proudly supplied tires to police and fire personnel for more than 100 years and that relationship is foundational to our company. We have clarified our policy to make it clear associates can express support for law enforcement through apparel at Goodyear facilities.”

Clearly, Goodyear is doing what so many corporate and political leaders have been doing in recent months, espousing support for “Black Lives Matter” at the exclusion of other racial and ethnic groups. In the aftermath of the death of George Floyd, there has been a rush of large corporations expressing encouragement for “Black Lives Matter.” Despite the stampede, nothing changes the reality that the founding organization, created at the infancy of this movement, is extremely left-wing and overtly political.

The “Black Lives Matter” organization was created by individuals who continue to espouse a radical ideology. In fact, they have admitted that they were trained Marxists. It is also an organization which is anti-nuclear-family among other extreme views.

In the warped and woke corporate headquarters of Goodyear, supporting all lives or President Trump or making the country great again is a political statement, whereas support for “Black Lives Matter” is just an “equal justice” issue.

Not surprisingly, at his Wednesday press conference, President Trump directly addressed this issue. He said he would be “very much in favor if people don’t want to buy there.” He also tweeted, “Don’t buy GOODYEAR TIRES - They announced a BAN ON MAGA HATS. Get better tires for far less! (This is what the Radical Left Democrats do. Two can play the same game, and we have to start playing it now!).”

It is time that Trump supporters followed their President’s lead and fought back against discriminatory corporate policies. In this case, after initial criticism, Goodyear made slight modifications to their policy to allow pro-police garb. If the pressure continues, the company might relax its ban on “MAGA Attire” and other political clothing.

If “Black Lives Matter” is allowed, support for President Trump must be allowed. Either we have a First Amendment, or we do not. The arbiter of what is permissible free speech is not Goodyear Tire and Rubber Company, it is the United States Constitution and our Bill of Rights.