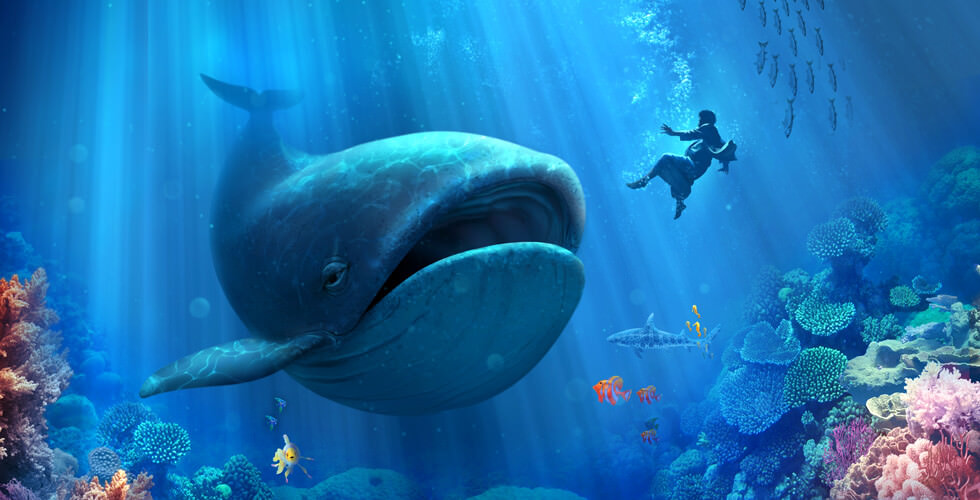 Most of us have heard about Jonah the prophet. He was the prophet who got swallowed up by what the Bible calls a “fish” and got a whale of a taxi ride. The name Jonah means dove. God called him to be the messenger dove to a rough and tough, truth-hardened group of people who lived in the city called Nineveh. Nineveh had sunk lower than a snake's belly in essential character, morality, and human injustice. In essence, God said, “Jonah, fly away to Nineveh, they need My help, they are in trouble."

Instead of being the love dove from above, that flew to Nineveh; Jonah flew from Nineveh. He got on a boat, paid the fare, and went the opposite direction. The Bible says, “But Jonah rose up to flee to Tarshish (Spain) from the presence of the Lord.”

Jonah didn't like the Ninevites behavior and demeanor. Sometimes even a God-appointed prophet can misunderstand the nature and character of God. The Bible says, "God is gracious and compassionate, slow to anger and abundant in loving kindness, and one who relents concerning calamity." (Jonah 4:2). Jonah said no to God. That took him from the presence of God rather than into the presence of God.

Here we have a God-appointed prophet of God that heard from God but did the exact opposite of what God wanted. It's like that old western song where the cowboy does something stupid. His thought afterward was, "What was I thinking?"

Who knows what is going on inside people’s heads these days? I saw a poster that said: “Don't bother walking a mile in my shoes. That would be boring. Spend 30 seconds in my head. That'll freak you right out.” Imagine what is sometimes inside of a woman's head. Once you understand why the pizza is round, packed in a square box, and eaten as a triangle, then you will understand women - just kidding. Maybe what makes us crazy in these COVID19 days is shopping. My advice is, "Don't let them take your temperature going into the store. It’s a scam. They're erasing your memory. For example, I went for bread and eggs and came home with Blue Bell ice cream and Snickers candy bars."

What happened next to “what was I thinking” Jonah and the boat he was on? The ship encountered a massive storm at sea, which scared all the passengers on the ship to death. The passengers discovered that Jonah was fleeing from the Lord and that his disobedience was causing it. Jonah admits the storm was a result of his issues with the Ninevites and God.

Isn’t that amazing? When we flee from what God assigns us or asks us to do, it affects others too. Jonah got thrown off the boat by the mob. When Jonah hit the water, he landed right into the mouth of a custom made super cruiser fish that swallowed him. Once inside of the fish, there was a revival going on. Jonah cried for help and pleaded for the same mercy that he would preach to the Ninevites. Crisis does that "God, help me, save me, have mercy on me. I'll go to Nineveh if you get me out of this." Does this sound familiar?

Jonah took a three-day taxi ride on the Mediterranean Sea, transporting him right back into his purpose, call, vision, and destiny. The fish ‘vomited’ him on an ocean shore near Nineveh. Once I heard a dynamic speaker say, "At that point, Jonah was so small spiritually a guppy could have swallowed him."

Lessons: When God fixes a fix to fix you, and you try to fix the fix that God fixed to fix you, God will find another fix to fix you. When you run away from the Lord, you never get to where you are going, and you always pay your own fare.

So, Jonah reluctantly spoke God's message to Nineveh. What happened next? The people 'repented and relented' of their selfishness and buffoonery. As a result, they freed themselves from their self-inflicted bondage. Then the city was transformed and revived. This revival should have made Jonah happy. Not on your life. Jonah was still so angry that the seaweed on his head cooked. He wanted condemnation, not liberation. Jonah wanted God to judge them and teach those people a lesson or two.

Isn’t it interesting that when we are in trouble, we plead for mercy and forgiveness? When we dislike those in need or don't believe the way we do, we want justice. We want God to judge and condemn them.

What’s God trying to teach us here? That mercy triumphs over judgment. That there are consequences to our choices, but God uses those as a last resort. That’s it’s possible to know about God but not know God. And that the same thing that brings us down can also bring us up.

Thus saith the fish and the dove.