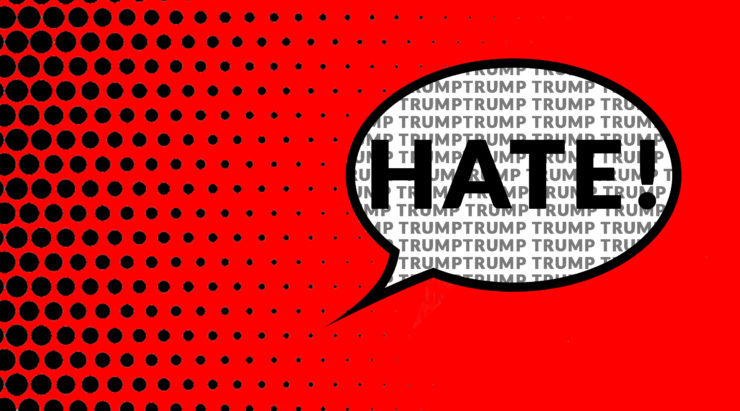 The MSM ("Mainstream Media") is roaring like a wounded lion over the ride around Walter Reed National Military Medical Center. It was the President’s way of showing his supporters some love and offer thanks for their patriotism and support.

It would seem like they are acting like bad children or complaining old men who have little else to do. Their main concern is the safety and health of the Secret Service agents that escorted the President around the perimeter of Walter Reed.

But the question that feigned concern raises is obvious.

How can we believe that they are really worried for the Secret Service, when it is abundantly clear that they wouldn’t mind if the President fell off a cliff?

This is deafening hypocrisy at the least.

They are willing to say every evil thing they can muster true or false about the president. They are the very embodiment of those addressed in this familiar passage of the scriptures.


“Presumptuous are they, selfwilled, they are not afraid to speak evil of dignities.” (2 Peter 2:10b)

But it is much worse than that. They are driven, inspired, empowered and complicit with the ancient enemy of all good and decent people.

Somewhere between 1527 and 1529 the Protestant reformer Martin Luther penned the much beloved song “A Mighty Fortress is our God.”

It is in the first verse that we read these words in the last lines of the stanza.


For still our ancient foe
does seek to work us woe;
his craft and power are great,
and armed with cruel hate,
on earth is not his equal.

It is hard not to imagine the ancient hatred of God and his people re-concerting, re-forming, and fueling the present-day hatred for this President in the media, the Democratic party, and Hollywood celebrities. It is a hatred gushing from all the discontented Americans who would sell off their heritage and deny their own history.

Sorry haters, such humility and gratefulness only endear us to Mr. Trump even more.

The media doesn’t understand. They think that we hold him high above all others as an idol to be adored and to bow to.

We see him as one of us. He is as American as it gets. We see ourselves in him.

Like him we don’t want strangers taking over our nation. We don’t want bullies threatening us and we will love and nurture anyone who wants to be part of this nation along with us.

Why does this float so far over the heads of the Washington elite?

This is the easiest question to answer. It is because it isn’t about the head – it is a matter of the heart.

In all its blaring imperfection we know that America is the greatest nation in the world, and we hold it dear in our hearts.

So does our President.

This is too deep for the MSM.

The only thing true about the print, cable, and network media today is that they have armed themselves with “cruel hate” and they use lies, propaganda, subtle omissions, innuendo, and direct insinuation to attack Trump. They endeavor to confuse those who are too busy, too indifferent and perhaps too dumb to see through the haze.

Sorry again MSM, we are quite delighted with our President’s ride around Walter Reed Hospital to give us a wave. That little gesture is far more than you have given us since the day he was inaugurated.

Hey, we are tired of being lied to and we will stand by the man to the last.

Put that in your daily news pipe and smoke it!

Also taken from Luther’s hymn are these words – they are our answer to your unfounded, extreme vitriol and hatred.


And though this world, with devils filled,
should threaten to undo us,
we will not fear, for God has willed
his truth to triumph through us.