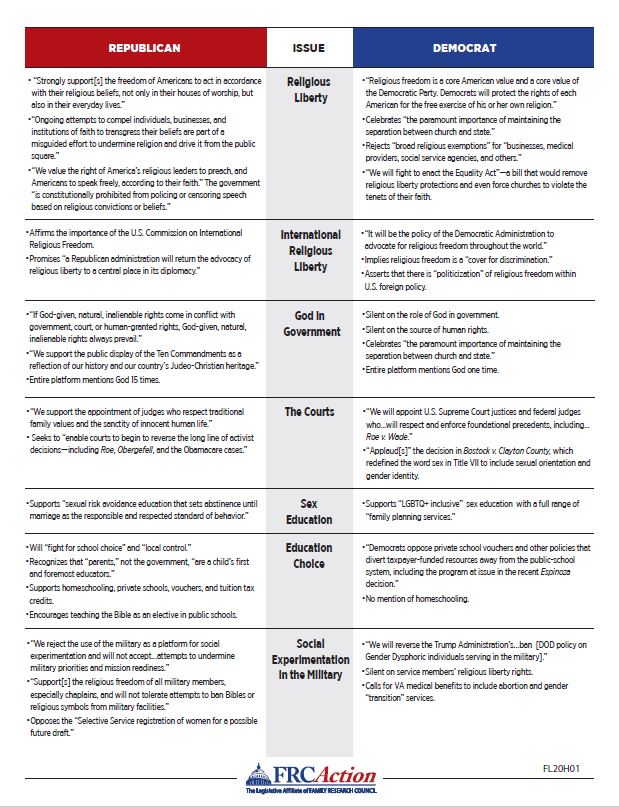 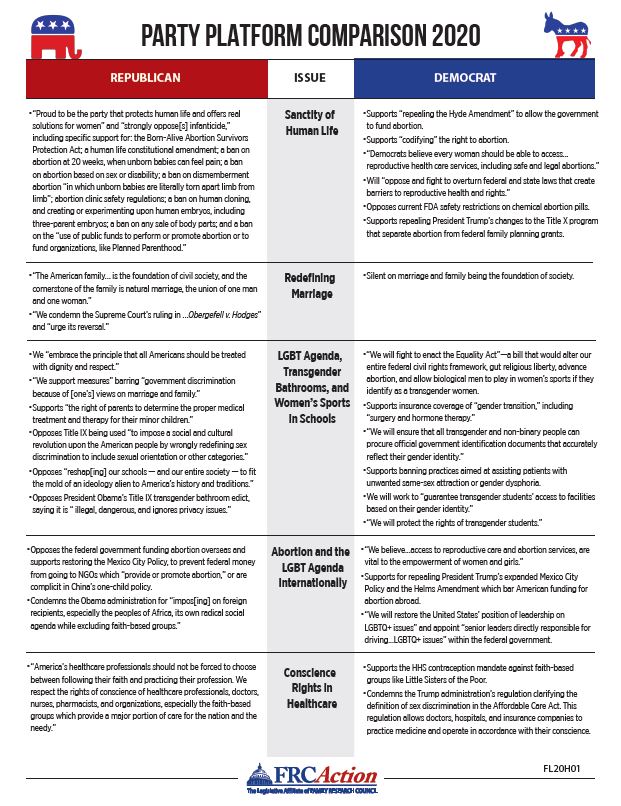 Proverbs 14:34 (NKJV) Righteousness exalts a nation, but sin is a reproach to any people.

The phrase, “righteousness exalts a nation,” affirms that a nation’s righteousness is determined by its public policies and how well they conform to God’s standards. In other words, only God-honoring policies that lead to God-honoring actions can make a nation great. Even though everyone may not realize it, righteousness is what makes people happy, not sin.  Proverbs 29:2 confirms this.

Proverbs 29:2 (NKJV)
When the righteous are in authority, the people rejoice; but when a wicked man rules, the people groan.

This verse states that people are happy when there are righteous public officials. God-honoring public policies in a nation are the result of God-honoring public officials enacting those policies.  Therefore, the issues the Bible identifies as directly impacting national righteousness should be foremost in Christians’ minds as they elect government officials. Unfortunately, not all Christians, Protestants, or Catholics follow this guideline of truth. During an election period, this guideline of truth can be reduced to the phrase, “Vote the Bible.” If righteousness is to exalt a nation, then God-honoring policy must be enacted by people who vote the Bible.

Let’s talk about life vs. abortion first. Here’s what the Bible says about when life begins.

Isaiah 44 (along with Psalm 139:13 and Jeremiah 1:5) says that the Lord made people and formed them in the womb. Therefore, defending the life of an unborn child must continue to remain a priority for biblical voters. This is confirmed by our governing documents – the Declaration of Independence and the United States Constitution – which both intimate that the most important function of government is to protect God-given inalienable rights.

The Unites States government was established on the premise that certain rights come from God rather than men; therefore, the government should protect those rights. Where a candidate stands on the issue of abortion is of paramount importance, and it is also one of the indicators of how likely he or she is to protect other inalienable God-given rights, like natural death instead of euthanasia in old age.

This is what the Democratic Party Platform says about life and abortion:

We will appoint judges who defend the constitutional principles of liberty and equality for all, and will protect a woman’s right to safe and legal abortion.

We believe unequivocally that every woman should have access to quality reproductive health care services, including safe and legal abortion — regardless of where she lives, how much money she makes, or how she is insured.  We will continue to oppose — and seek to overturn — federal and state laws and policies that impede a woman’s access to abortion.

Based on what we have just read, we can conclude that the Democratic Party Platform not only supports abortion, but promotes it even if your taxes have to pay for it.

At this point, it is worth mentioning that the Holy Bible never condones abortion. Both the medical and scientific communities agree that life begins at conception. Therefore, abortion is murder, and the Bible clearly states (in Exodus 20:13 and in Matthew 5:21), “You shall not murder.” Life begins at conception and abortion is murder, plain and simple.

This is what the Republican Party Platform says about life and abortion:

The Constitution’s guarantee that no one can be deprived of life, liberty, or property deliberately echoes the Declaration of Independence’s proclamation that all are endowed by their Creator with the inalienable right to life.

Accordingly, we assert the sanctity of human life and affirm that the unborn child has a fundamental right to life which cannot be infringed.  We support a human life amendment to the Constitution and legislation to make clear that the Fourteenth Amendment’s protections apply to children before birth.

We will not fund or subsidize healthcare that includes abortion coverage.  We support the appointment of judges who respect traditional family values and the sanctity of innocent human life.

Based on what we have just read, we can conclude that the Republican Party Platform does not support abortion or the promotion of it.
Now let’s talk about marriage vs. homosexuality. God’s definition of marriage is stated in Genesis 2:24.

Genesis 2:24 (NKJV)
Therefore a man shall leave his father and mother and be joined to his wife, and they shall become one flesh.

Based on the truth of the Bible, God’s definition of marriage is between one man and one woman – one male and one female. Many say that Jesus never addressed same-sex marriage, but in Matthew 19:1-6, Jesus is very clear on what God said about marriage being between one man and one woman. If a political candidate is willing to accept, empower, and advance same-sex marriage, it is a clear indication that he or she does not embrace the moral truth found in the Holy Bible.

This is what the Democratic Party Platform says about same-sex marriage:

Democrats applaud the decision by the Supreme Court that recognized that LGBT (LGBT stands for Lesbian Gay Bisexual Transgender)people – like other Americans – have the right to marry the person they love.

From this statement, we can conclude that the Democratic Party Platform condones and supports homosexual, lesbian, transgender, and same-sex marriage.

This is what the Republican Party Platform says about same-sex marriage:

The American family is the foundation of civil society, and the cornerstone of the family is natural marriage, the union of one man and one woman.

Our laws and our government’s regulations should recognize marriage as the union of one man and one woman and actively promote married family life as the basis of a stable and prosperous society.

For that reason, as explained elsewhere in this platform, we do not accept the Supreme Court’s redefinition of marriage and we urge its reversal, whether through judicial reconsideration or a constitutional amendment returning control over marriage to the states.

From these statements, we can conclude that the Republican Party Platform is against same-sex marriage because it destroys families and weakens a society.

Question: How do I vote the Bible? Answer: Vote for the candidate whose party platform supports the Word of God and a biblical worldview.

Now, you may or may not agree with everything in this article, but if you are in agreement with the truths found in the Holy Bible (if you embrace a biblical worldview), then you can and should point these truths out to other Christians, Protestants, Catholics, and others who profess to believe the Bible as God’s Word, and you can and should encourage them to vote the Bible.