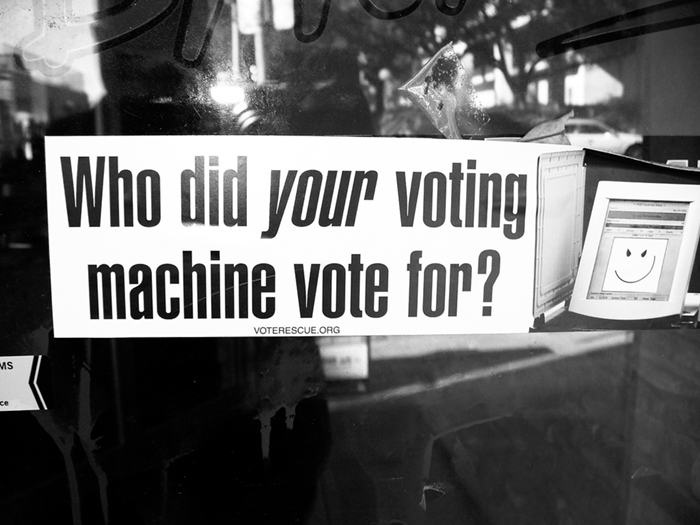 A threat has been mounted to the integrity of U.S. elections by political operatives who have access to vote-flipping software (from the U.S. intelligence community) and may have been used it in the 2020 election. I was amazed to learn about this threat, and the danger it poses, in two recent podcast interviews by Lt. Gen. Tom McInerney USAF (Ret).

He raises an urgent alarm about the use of illicit software to flip the vote count at the state level and alter the outcome of the presidential election. In the first interview on 11/1/20201, two days before the election, he describes the software and its origin in the Obama Administration. In the second interview on 11/5/20202, two days after the election, he points to evidence that it was used in the 2020 election and stresses the need to inform the American public so they will line up behind President Trump to correct the wrongdoing.

In both interviews McInerney cites the work of Mary Fanning, an investigative reporter writing for the American Report. Fanning, in turn, has built the entire investigation around the testimony and recent guidance of Dennis Montgomery, the CIA contractor turned whistleblower who designed the software in question originally for top secret government use, and then delivered 47 hard drives to the FBI in 2015 exposing its illicit use for domestic political purposes.

The content of General McInerney’s two interviews along with supporting details by Mary Fanning are as follows.

The software in question, called ‘Hammer’, is a foreign surveillance system created after 9/11 to monitor radical Islamic activity. It was developed in 2003 by the NSA (under programmer Dennis Montgomery) and used by NSA under high security to surveill foreign adversaries.

After the Obama administration came into office in 2009 ‘Hammer’ was moved to the CIA, by John Brennan and James Clapper, to a secret facility at Fort Washington Maryland on February 3, 2009. Under the CIA its use was restricted to foreign surveillance, however this restriction was breached and a secret VPN was set up in the Obama White House to gather information on political opponents and other prominent figures. The surveillance extended to more than a hundred congressmen, a similar number of lower court judges, Chief Justice John Roberts, and even corporations and their intellectual property. The information was gathered for the purpose of political leverage.

Gen. McInerney emphasizes that the political use of ‘Hammer,’ directed at US citizens, is illegal. The CIA cannot look at US citizens. Only the FBI can do that with the proper warrants.

Under Obama the CIA also created an application of ‘Hammer,’ called ‘Scorecard,’ designed by Dennis Montgomery, as a tool to intervene in foreign elections and change the outcome. It was designed to intercept and change the vote totals at a certain point in the reporting process of an election. ‘Scorecard’ was created to be used exclusively in elections of foreign countries and was actually used that way. Under the CIA ‘Scorecard’ was restricted to foreign elections, however this restriction was also breached by the Obama administration and it was subsequently used in elections within the United States.

In these elections, vote counts leaving a Secretary of State server might be altered in increments of 3% or less in the early voting, then in greater increments toward the end when larger batches might be deleted or flipped. The Obama administration used scorecard in 2012 primaries and presidential election.

In August 2015, the last year of Obama’s second term, Dennis Montgomery, acting as a whistleblower, delivered 47 hard drives to the FBI and DOJ, containing evidence of the way ‘Hammer’ and ‘Scorecard’ had been used in the Obama administration. He was granted immunity and the FBI evaluated the hard drives over a four-month period ending in December. Taped conversations on the hard drives of Brennan, Clapper and other officials, who did not know they were being recorded, revealed that ‘Scorecard’ was used to flip the 2012 Florida election for Obama. Also that the nomination was secured for Hillary Clinton over Bernie Sanders in the same manner.

In the 2016 election an attempt was made by Obama and the Democrats to use ‘Scorecard’ in favor of Hillary Clinton but “something happened to it” that night according to Gen. McInerney, who would give no more details.

When Obama left office in early 2017 ‘Hammer’ and ‘Scorecard’ were removed from the CIA (“they used some ‘kabuki’) and taken outside the government by the Democrat Party. Gen. McInerney said it is extremely important for everyone to know this program was taken out of the CIA and is in the hands of the Democrats. He said, two nights before the election, ”We know where it is located, we know it is active tonight, and they’ve been looking at a whole host of things as has the DNC, using false IP’s and they are looking around and they’re trying to set up this voting thing that happens on Tuesday night. It’s going to look good for President Trump but they’re going to change it.”

In the aftermath of election night (November 3) what evidence is there that the outcome may have been affected by ‘Scorecard’?

Florida is the only swing state in which there have been no questions. This is because in Florida the voting system was secured ahead of time against the threat of ‘Scorecard’ with the help of Dennis Montgomery.

This is a coup d’état - those are the words a very prominent American in the administration. It’s a continuation from the Trump campaign, to the Russian collusion, to the impeachment, and every other trivial thing that they have brought up to try to get rid of President Trump. And the reason they don’t want us or Trump in there is because he is exposing all this corruption that we have seen in the intelligence community, the FBI, and the Department of Justice.

We are on the verge now of either going ahead as a republic or we will have become socialized and the next step is clearly communism. Frankly. President Trump is the only one who can stop this, because he is the only one who has the courage to do so.