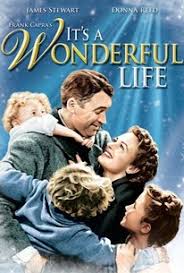 Christmas time should be an inspiring and ascending time to celebrate the birth of Christ. But for many, and especially this year, Christmas is a melancholy time emotionally. It's often called the Eggnog Blues. There's more despair, more depression, and more emotional turmoil than at other times of the year. Many even consider taking their own lives at a time that should be life-giving, not life-taking.
Do you remember the movie entitled It’s a Wonderful Life? It’s about George Bailey and an angel named Clarence. In his youth, George had big hopes and big dreams. But George ended up living in Bedford Falls, which he considered to be a small town in a rural area, working in his father's small loan agency, making loans to little people who had small dreams.
One day, a small clerk in George’s deceased father's small business made a big mistake. The clerk lost the cash deposit he was supposed to make at the bank. George's company didn't have the money to cover the misplaced deposit. George was at the end of his rope. He even considered suicide to escape from broken dreams, financial ruin, and public embarrassment. He couldn't see a way out of his situation. With no hope, George became disorientated. He was drifting and despaired his life. He wished he had never been born.
What is Suicide? Suicide is a permanent choice made in response to temporary pain. Most people don't want to die; they want relief from their current misery. They can't believe that I"t's a Wonderful Life."
How did George escape from his deep pain? Enter Clarence, an angel sent by God. Why? When you are isolated, you are more likely to believe a lie. It helps if you have someone to give you perspective. In dark times, God uses others to see what you can't see. God used others to provide you with hope. George cried out to God. God responded by sending a messenger in the form of a person. Sound familiar? That’s the Christmas message.
When George wished he had never been born, Clarence gave George a different perspective. Clarence showed George how he, George, hasd touched others' lives and how different life would be for his wife Mary and the Bedford Falls community if he had not been born. Clarence helped George to see his wonderful life. He saw what George couldn't see when George couldn't see it.
Maybe you know someone who is like George, or perhaps that person is you. Let’s get you going again. If you are in despair, if you are drifting or disorientated or depressed, why not call on God for help? If you wish you had never been born, call on God to send you a godly counselor, a godly person, a godly church, a godly avatar, whom God will use to listen to you, speak to you, and walk with you, just like Clarence did for George.
The way you get bright hope for tomorrow is through God in the form of a person who can give you a biblical perspective. For example, this Christmas, Christ’s Church of the Valley annexes have raised over one million dollars to pay for professional counselors to counsel those in the Phoenix area who are currently experiencing emotional turmoil. Whether you attend a church or not, it's as easy as signing up at CCV.church/press-on. They will arrange for a licensed counselor to be your ‘Clarence.’ Church is a great place to find a helping hand to lift you up, then out, of a crisis.
At the end of the movie, the people of Bedford Falls heard of George’s predicament. The people got together and raised enough money to make the bank deposit. They came to George’s house and gave him the money. Do you remember what Zuzu, George’s youngest daughter, says at the end of the movie? “Look, Daddy. Teacher says, every time a bell rings, an angel gets his wings." And George replies, "That's right; that's right.”
How about that? Clarence, the angel, receives his wings from God by successfully pulling George out of a funk. But consider this. George earned his wings also. How? For the first time, he saw who he was to the people of Bedford Falls: an angel. He gave up his life for the lives of others, for many years. Then George received more than he had given to Bedford Falls. He discovered that while Bedford Falls may seem small to man, it’s big to God. It takes a big person to live in a little place. Just ask Joseph or Mary; God started them small until it was time to go big with the birth of Jesus.
This movie captures Christmas's gift perfectly, wrapped up in shiny gold paper in George Bailey and Clarence's life. When you are at the end of your rope, you will find God lives there. When the world was at the end of the rope, God sent Jesus. God sent Himself to walk with us in human form, to talk with us and reveal to us that which we currently can't see. He gives us His perspective for a wonderful life.
Like Clarence, you can be an ‘angel’ to someone who is struggling. You might even earn your wings, and your ‘George’ might earn their wings. You’ll both be better for it. Merry Christmas!
Maybe my author byline should be Ed “Clarence” Delph.
Copyright ©2020
Read more by Ed Delph
Tweet