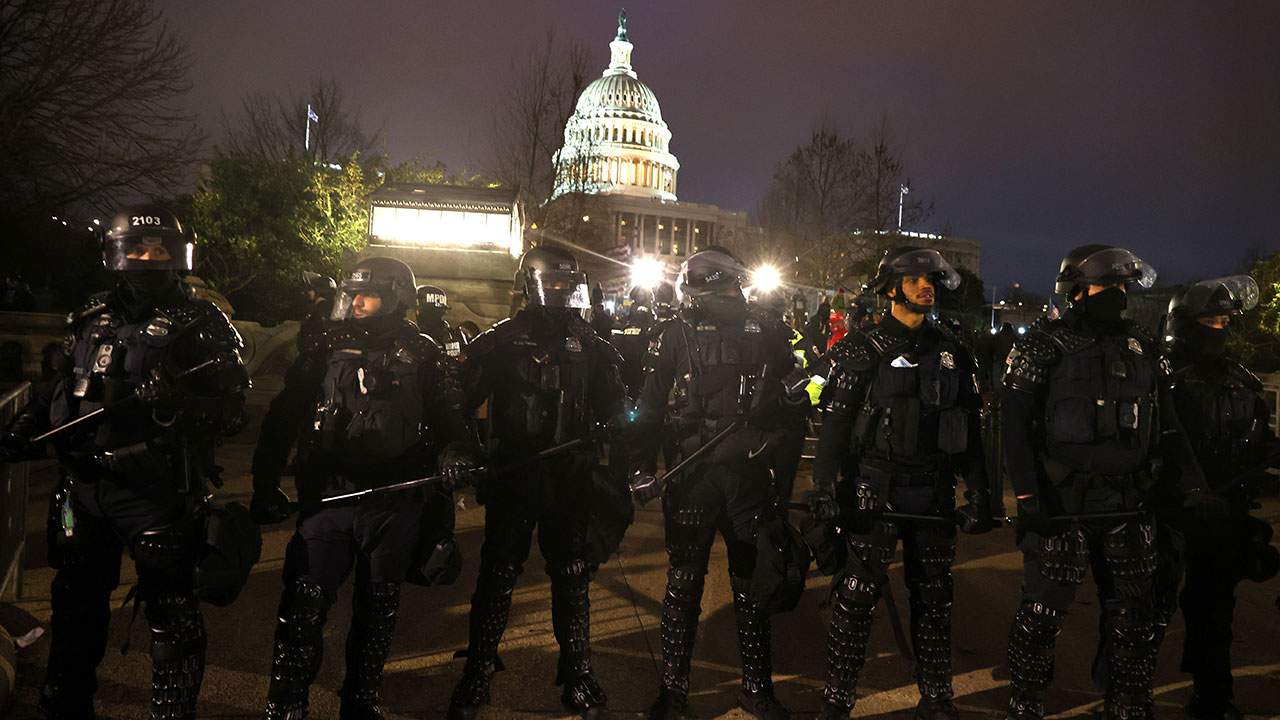 The Second American Revolution has continued for many months with massive resistance, rebellions, and riots “in 48 out of the 50 largest cities (1) in the United States.” However, the mass media considered those riots and looting as mere protests. One media personality standing in front of a burning business said, “The protests have been mainly peaceful.” Such hypocrisy would gag a maggot.

Some of those “protests” went on for months with hundreds and thousands of businesses destroyed, public buildings, including a post office and police station, damaged. Spineless, soft, and stupid mayors and governors refused to arrest the rioters since they were bedfellows. Law enforcement watched as leftist thugs disrupted, destabilized, and destroyed public and private businesses. The politicians’ response was to denounce, defund, and disband the police.

On January 6, a portion of Trump’s supporters got out of control and broke into the U.S. Capitol, taking over some offices, breaking windows and doors. It will be no surprise if we discover BLM and Antifa operatives had infiltrated the rally. One woman was killed, and four others died during the brawl. There was no justification for the violence. While the massive crowd supporting President Trump was legitimate, those who forced their way into federal buildings were thugs, some in MAGA hats. Hopefully, they will spend years in prison to contemplate their form of political activity and “patriotism.”

This was a continuation of possibly the Second American Revolution.

July 14, 1789, the Storming of the Bastille in Paris (an armory, fortress, and political prison where only seven prisoners were discovered) is considered the beginning of the bloody French Revolution. It continued with the bloodstained guillotine severing about 40,000 heads without the benefit of trial, with another 300,000 dying by drowning, firing squad, and other forms of mass execution. The Revolution ended when Napoleon (its major benefactor) stepped into the political vacuum it created. Furthermore, millions of Europeans were killed during his twelve-year reign.

Ninety-eight attackers and one defender were killed in the initial assault of the Bastille, followed by Governor de Launay, who ran the prison, and a few other victims. As the heads of the Bastille defenders were paraded through the streets, and the explosive news reached King Louis at his palace in Versailles, he exploded, “This is revolt!” An aide responded: “No, Sire, it is a Revolution!”

America is not in revolt or resistance, but in a revolution for the same reason - identity politics or pitting class against class. In France, it was the common people (who paid most of the taxes and fought the wars) against the combined corrupt and privileged clergy and aristocracy.

American leftists have been pandering to blacks, Hispanics, LGBTQ crowd, college students, Muslims, effervescent Evangelicals, dwarfs, Eskimoes, and deaf tuba players for years, stroking their tender feelings. Now, the shallow-minded among them have placed themselves in the forefront of the battle - cannon fodder proving they have always been “useful idiots.”

In recent years, conservative Christians and conservative pagans, and all sane people who believe in a robust America-first position have generally gravitated to President Donald Trump. Trump is known for being a rude, crude, lewd dude; however, ordinary people can separate his personality from his policies. He managed to keep his promises, something that embarrasses most politicians of all parties.

After all, Trump’s promise-keeping might suggest that all politicians should do the same. Wow, how would that work? An honest promise-keeping politician appears on the scene as often as a chaste prostitute does.

Trump’s enemies (all who spend most of their time in left field) opposed him from his announcement as a presidential candidate, refused to recognize his lawful election, accused him of being a Russian agent, frequently compared him to Hitler, and impeached him in the House but failed to convict in the Senate. With the total support of social media, the mainstream media, and all leftists, they successfully stole the 2020 election. After their victory, those same sanctimonious hypocrites asked for Conservatives to forget their vicious, virulent, and vile actions over the past four years and join them around the flagpole singing kumbaya. The Democrats are willing to bury the hatchet - right in Trump’s back.

The leftist Democrats and anemic Republicans rightly identified the January 6 activists as “thugs,” “a mob,” and “terrorists”; however, those same people refused to show such anger over the “peaceful” protests that have continued since the George Floyd death on May 25, 2020.

President-elect Biden said of the January 6 rally, “This is not a protest; it’s an insurrection;” however, he was quiet as a mouse about the months of violence. Was that because it was HIS crowd doing the violent acts, burning businesses, looting stores, and killing innocent people?

Our new Commander-in-Chief is the Hypocrite-in-Chief.

Shockingly, out of a total of 5,000 demonstrations over the three months following the death of George Floyd across the United States, 46.5% were connected to the Black Lives Matter (2) movement. But we are not supposed to say that since it embarrasses the hypocrites in the media and politicians standing around sucking their thumbs while the cities burned and innocent people died.

While there is no excuse for the excesses at the Capitol, there is an explanation.

All will agree that over half of Americans have lost confidence in our elections. They have many unanswered questions and no answers. Furthermore, there is no doubt that dead people and unregistered voters voted. And some voted many times. All these voters, except the dead, should go to prison. I don’t know, and neither do you, about the reliability of the voting machines; whether or not there was a conspiracy; whether or not there were massive failures; but there were enough dubious, disputed, if not dishonest actions that demand an investigation.

Trump haters quickly assure us that there was no overwhelming evidence of fraud, but who defines overwhelming? We have been told repeatedly that scores of state and federal courts looked into the matter and found nothing amiss. No, the courts did not hear the evidence. They refused to look; therefore, they could not see any problems. I have not heard anyone try to defend the apparent unconstitutional voting procedures in Pennsylvania.

What would be wrong with having a commission look into the matter if there is nothing to hide? If the election were fair, that would support the accusation that Trump supporters are a bunch of zealous know-nothings and members in good standing at the local Flat Earth Club.

If there was corruption, with Biden and others fraudulently elected, it means an illegal regime will rule us. Our wise Founders knew that the day might arise when it would be time to do it all over again and throw off a tyrant worse than King George. It does not mean we revolt because of high taxes, paying reparations to blacks, support of the LGBTQ crowd, forgiving college loans, or going even deeper into debt. Still, there could be a time to “dissolve the political bands” which bind us together. But never for frivolous reasons.

True patriots must understand that historically republics and democracies have always come under attack with the threat of losing freedom; thus, requiring another quest for liberty. Jefferson clearly declared in the Declaration of Independence, “We hold these truths to be self-evident, …That whenever any Form of Government becomes destructive of these ends, it is the right of the People to alter or to abolish it, and… it is their right, it is their duty, to throw off such Government, and to provide new Guards for their future security.”

Are we really there yet?

In his 1787 letter to William Stephens Smith, Jefferson declared, “The tree of liberty must be refreshed from time to time with the blood of patriots and tyrants.”

But not yet. I dread the time when I have to make the decision the Founders had to make; and if fair elections are not possible, then the time is close at hand.

The Capitol rebellion did not have to happen, and some of the blame must fall on Trump. He failed to organize and prepare for a vast crowd that could easily be infiltrated by rogue, ruthless, and revolting rabble. He should have informed the crowd that they should always obey authorities and follow instructions from appointed marshals with communication devices and wearing red MAGA coats. Moreover, they should have been cautioned never to be involved in violence. He did not take such simple, obvious precautions. [Editor's note: Was it really Trump's problem, or blame, for precautions not taken? I would posit "NO."]

King Louis VI failed to take precautions when he visited the Bastille without his Swiss bodyguards on July 15, 1789, the day following its fall. Then, on August 10, 1792, a mob stormed the King’s residence and massacred over 600 hundred of the royal Swiss guards. On January 21, 1793, the King was beheaded on the guillotine, followed later by Queen Marie Antoinette. The King’s family was imprisoned, and the bloody Revolution ended years later with Napoleon assuming control of France and much of Europe.

Trump may not get his head handed to him; only get a proverbial hatchet in his back from Democrats, and many backstabs by former friends.

France turned from the God of the Bible at their Revolution, and following America’s Revolution, America experienced a religious revival called the Second Great Awakening which spread from shore to shore across the fruited plain.

I’m fearful of what may spread from shore to shore following this Second American Revolution.