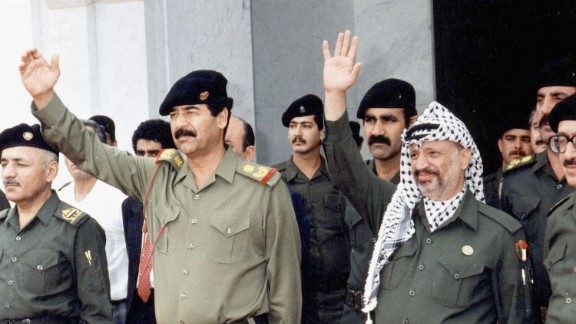 Recalling Yasser Arafat elicits terms such as terrorism, Muslim Brotherhood, guerilla warfare, intifada, Palestinian Liberation Organization, Palestinian Authority, and The Nobel Peace Prize. Arafat was born in Cairo in 1929 and died in 2004.  The anti-Israel warrior lived in Egypt, Qatar, Jordan, Lebanon, and Israel at various times in his life. He was also a world-class propagandist.

Historically, Palestine was a term used to describe the geographic region between the Mediterranean Sea and the Jordan River. Jews and Arabs lived in the region for centuries, controlled by Assyrians, Persians, Romans, and Ottomans. There has never been a nation of Palestine, a Palestinian civilization, a Palestinian culture, or a Palestinian language.

Propaganda that Israel was created from land stolen from Palestinian Arabs is false. Jews and Arabs lived in this area. When Israel became a state in 1948, Arabs were free to remain. Israel was invaded by 5 Arab nations seeking to destroy her. Arafat fought against Israel in that war. Many Arabs fled to Arab nations. Israel was not defeated. After the war, 150,000 Arabs that returned, or who had remained in Israel, became Israeli citizens. Other Arabs that left during the war remained in Arab countries.

Choreographing Arab claims over holy sites in Jerusalem was another of Yasser Arafat’s accomplishments. He focused on “Muhammad’s Night Journey and Ascension,” an Islamic text in Chapter 17 of the Quran. It details Mohammad’s flight from Mecca to Jerusalem’s Temple Mount where he prayed in the Mosque and then flew to Heaven where the Angel Gabriel gave him a cup of wine and a cup of milk and then he flew back to Mecca on a winged animal. Sometimes the text has been re-interpreted to claim that Mohammad went to the al-Aqsa Mosque before ascending into Heaven, rather than the original verse.

No mosque on the Temple Mount existed during Mohammad’s lifetime. Umayyad Caliphs built the al Aqsa Mosque decades after Mohammad’s death. Muhammad’s flight is still used today as the reason why al Aqsa Mosque is the 3rd holiest site in Islam.

Mahmoud Abbas was the protégé of Arafat. He was born in 1935 in Safed near Galilee. During the 1948 War, his family fled to Syria. He graduated from the University of Damascus and went to Moscow for a Ph.D. Abbas joined Arafat in 1961 and returned to Israel in 1995. Abbas is Chairman of the PLO and President of the Palestinian Authority. Despite thousands of years of Jewish history, Abbas gives televised addresses that stir the pot against Israel’s claims to holy sites in Jerusalem.

King Abdullah II of Jordan balances on a narrow fence between Prime Minister Netanyahu and Mahmoud Abbas on a variety of issues, especially the Temple Mount. In the jig-saw puzzle of international geopolitics, Jordan sides with Iran and the PA. King Abdullah II has not signed the Abraham Accords.

Reports in Israel Hayom media posit that Israel and Saudi Arabia have been negotiating about Saudi Arabia joining the Waqf. Conjecture is that Jordan will accept Saudi members of the Waqf to counter increased Turkish influence. One might speculate that when Saudi becomes a member of the Waqf, both the Kingdom of Jordan and the Kingdom of Saudi Arabia could sign the Abraham Accords.

Arafat’s legacy, the influence of the PLO, the PA, and Mahmoud Abbas have been marginalized by President Donald J. Trump and the Abraham Accords. The Accords are Trump’s vision for peace through economic expansion. Abbas hopes a Biden Administration will return to the 2016 pro-Iran, pro-PA policies of President Obama. A bone-chilling map of the Middle East covers a wall in Mahmoud’s office.  It shows the area that is Israel replaced with a Palestinian State.

Yasser Arafat set fires that burn years after his death. Donald J. Trump and the Abraham Accords are extinguishing those flames.