The City of Evanston, Illinois has passed legislation to pay reparations for discrimination against Black people of $400,000 and each payment will be $25,000. The ordinance says that people can be eligible for the money by: “Being a qualifying residents that must either have lived in or been a direct descendant of a Black person who lived in Evanston between 1919 to 1969 and who suffered discrimination in housing because of city ordinances, policies or practices.” The city has not disclosed the decision-making criteria for those people who meet the initial requirements. If you take the $400,000 and divide by $25,000 you wind up with 16 people. How will they decide who the 16 will be? I wonder how the rest of the people who apply will feel when they don’t get picked.

At the end of the Civil War in the southeastern states, Black slaves were freed and were initially promised the opportunity to get “40 acres of farmland and a mule.” That promise was eventually taken away by the...Democrats. From the time the promise was made, when the subject of reparations came up, most of the time “40 acres of land and a mule” was the benchmark. The price per acre of farmland and the cost of a working mule at today’s rate is less than $127,000 (1). If we gave every Black person in the US $127,000 that would be $5.5 trillion.

Lyndon Johnson in his 1964 State of the Union address said “This administration today, here and now, declares unconditional war on poverty in America.” In the 57 years since the start of the "War on Poverty" in America we have spent the cost of all U.S. military wars since the American Revolution (2). The United States Census reported that in 2019, the poverty rate for the United States was 10.5%, the lowest since estimates were first released for 1959 before Johnson’s War on Poverty.

If you look at the chart you will see the trend line since 1959 of the percentage of various races and the percentage of the races in poverty. Even during the Great Recession of Obama/Biden, you don’t see a significant uptick in poverty in the Black community. 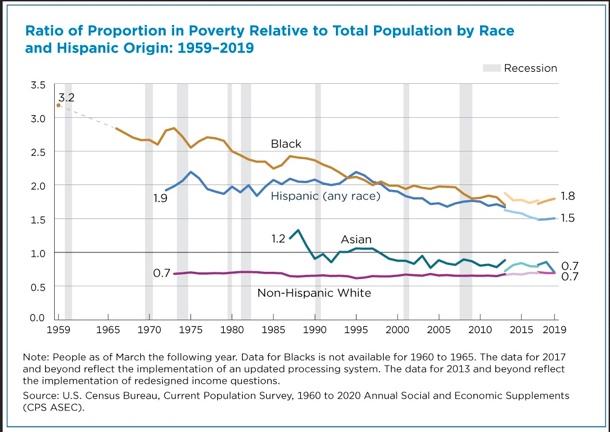 The Black people as a percentage of the population reached its peak in 1790, slightly less than 20%, and reached its bottom in 1930 with a percentage of 9.7%. The Black immigrant population has increased fivefold since 1980. There were 4.2 million Black immigrants living in the U.S. in 2016, up from just 816,000 in 1980, according to a Pew Research Center analysis of U.S. Census Bureau data. Since 2000 alone, the number of Black immigrants living in the country has risen 71%. Now, roughly one-in-ten Blacks (9%) living in the U.S. are foreign-born, according to 2016 American Community Survey data, up from 3% in 1980. Immigrants make up 10% of the Black population, in the March 2016 Current Population Survey (3), and would not be entitled to reparations.

I find it hard to believe housing discrimination is the same as slavery. It was not until the Fair Housing Act, enacted as Title VIII of the Civil Rights Act of 1968, that the federal government made its first concrete steps to deem all types of housing discrimination unconstitutional. A 2019 book by Keeanga-Yamahtta Taylor, a professor of African-American studies at Princeton, called Race for Profit: How Banks and the Real Estate Industry Undermined Black Homeownership (4). The book fails to truly lay the blame for the true cause of the housing failure and the foreclosure of millions of Black homes. The blame lies at the feet of 4 Democrats, President Bill Clinton, Senator Chris Dodd, and Representatives Barney Frank and Maxine Waters. These 4 were responsible for community lending and pressured the mortgage agencies to pressure the lending practices of mortgage lenders. Inner City poor Blacks were told they could have the American dream of owning a home even if they didn’t have the income to make the payments. The foreclosure rate went from .46% in 2005 to peak in 2010 at 2.23%. In 5 years, the number of foreclosures increased 5 times.

One might think the housing discrimination and predatory lending from 2005 to 2010 was more damaging to Blacks than the period of time between 1919 to 1969.

I believe that no discussion of reparations can be complete without the discussion for the number of northern men who gave their lives to free the Black men, women, and children in the south. Had they not died then slavery would not have ended as soon as it did. Historians have estimated that over 750,000 (5) northern men died in the war. The Black population in 1860 was about 4.4 million which included 500,000 free Blacks. The men who died in freeing the Black people in America were equal to 20% of the Black population.

There is no question that not all of the men who were killed believed in emancipation, but they still fought and died. If we want to discuss reparations, we must consider the families of those who gave, as Lincoln said in his Gettysburg address, “the last full measure of devotion.”