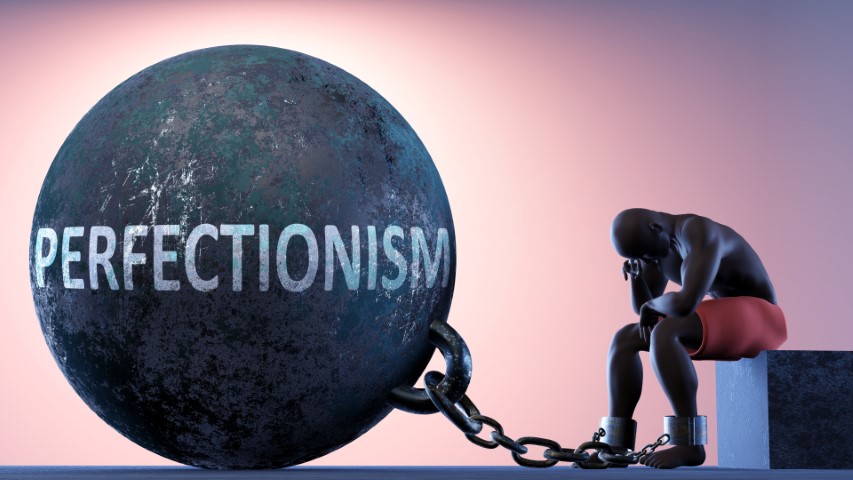 Even though perfection seekers think and act from the ends of the bell-shaped curve, they set the bar of perfection for everyone else too. The problem is they expect everybody else to comply with what they or their perfect focus group is seeking. There is nothing wrong with desiring to make things better, but demanding perfection in everything makes one's trivial pursuit a trivial pursuit. Why? Because there will never be enough perfection in what they want. Enter the cancel culture. Good things, taken to extremes, can become bad things, quickly and destructively.

"Well, why didn't you marry her?" asked the friend. He replied, "She was looking for the perfect man." Perfection seeking works both ways.

There was once a man named Solomon in the Bible. He pursued life to the fullest, and he could do it. He was the wealthiest man on earth. He could buy anything and do anything he wanted. He was an extreme person with extreme excesses in life and thought in every way. He started a quest to find contentment and meaning in life. He sought to find new sources of significance, identity, and security. He thought he would find perfection in something or someone other than God. Even though God gave him massive resources, God was not enough. God seemed so old-fashioned and out of date. God was not enough.

His recollections about his perfection quest are recorded in Ecclesiastes, chapter 2, for us to glean.

In verse 3, Solomon says, "I explored with my heart how to stimulate my body with wine…and how to take hold of folly." Heaps of people do that. Excessive alcohol, drugs, uppers, downers, stimulants, and the like, will never heal life's wounds or give meaningful answers to life. Why? There will never be enough highs. The problem with extreme highs is that you have extreme lows, and the following highs need to be higher than the last high.

In verse 4, Solomon says, “I enlarged my works. I built houses for myself and planted in them all kinds of trees.” He tried better homes and gardens to see if life was about owning the most expensive house on the block. That way, he could see and be seen. Maybe he even would be mentioned on one of those Hollywood celebrity shows. It was a quick fix for a short time, and then off he went, looking for another newfound source of significance and security. The problem was not in the houses and trees. The problem was in Solomon. He was trying to fill his God-shaped void with something other than God.

Next, he sought to find fulfillment in nature and the environment. "I made gardens and parks for myself. I made ponds of water for myself from which to irrigate a forest of growing trees." He was going green, thinking that it would fill the void inside him. Green is a good thing, but green taken to an extreme can become a bad thing. Green issues, taken to extremes, often become political, personal, and toxic to the people demanding them. Often, they consider themselves more virtuous than others and then disdain anyone who is not as extreme or 'perfect' as they are. And because there will never be enough, it sours others who have environmental concerns, hurting the cause more than helping the cause.

Solomon's subsequent trivial pursuit was trying to be the most prominent and wealthiest businessman in the world. In verses 7-8, he says, "Also I possessed flocks and herds larger than all who preceded me. I collected silver and gold and the treasures of kings and provinces." He displaced the Amazon and Facebook of his time and became the top Unicorn. He was the latest, the greatest, the biggest, the best. To Solomon, this was like backing up the Titanic and running over the iceberg again.

Then Solomon tried every kind of sex and excess pleasure in verse 8. “I provided male and female singers and the pleasures of men – many concubines.” If sex made people content, the world would shine like the sun. But, as the song says in the movie The Greatest Showman, "There will be never enough for me." Nope, after a while, that was toxic and empty too.

Finally, Solomon became the most famous and wealthy man that ever lived from the beginning of history. Not even this could satisfy his search for significance and security. When was enough, ever going to be, enough? Happiness, contentment, perfection, and the real meaning of life were like a greased pig to Solomon. Every time he thought he caught the pig, it squirted right out of his arms. Sound familiar?

Eventually, Solomon had an ‘Aha’ moment. He realizes all his trivial pursuits were "vanity and striving after wind." He got it. The only thing that could ever fill the God-shaped void inside him is God. He says it this way, “…fear God and keep His commandments because this applies to every person.” Ecclesiastes: 12:13. Solomon's conclusion applies to us also. Finally, and thankfully, enough became enough. I think that greased pig just got caught.

Our takeaway? Good things, taken to extremes, will eventually become bad things that end up hurting your cause more than helping your cause. Pursue excellence, not perfection. Otherwise, you’ll end up in the perfect storm you created.