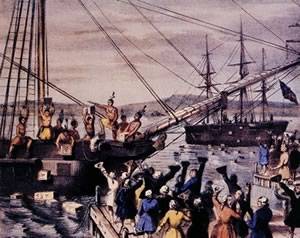 "How many of you people want to pay for your neighbor's mortgage?" asked CNBC's Rick Santelli on the floor of the Chicago Board of Trade. The floor traders booed the idea of their tax money being used to pay the mortgages of others. Santelli went on to say how un-American the whole concept was, and spontaneously called for a Chicago Tea Party to protest the government's misuse of our tax dollars.

Within 24 hours the video of "Rick's Rant" (as it has become known) was the most-watched video on YouTube (see LINK below) and a website had been set up to organize "Tea Parties" on the Fourth of July in Chicago, Los Angeles and Boston (see LINK below to sign up). I have no doubt that "Tea Parties" will spring up all over the nation. If you'd like to join one in South Florida, shoot me an email!

The CNBC anchor kidded Santelli about going into politics. Rick said, "I don't want to have to take a shower every hour. The last place I would want to be is Washington, DC."

Rick is not a politician, nor is he a political commentator. Like me, he used to be a financial professional. Today he does interviews and commentary on US Treasuries for CNBC, the largest financial news channel.

Which brings up an interesting point. When Santelli asked the traders what they thought about Obama's latest bailout, he had a pretty good idea of what their response would be. One trader mockingly asked, "Should we all stop paying our mortgages?" - a reference to the notion many have that if they don't pay their mortgage, the government will have to bail them out.

On the other hand, people who have no understanding of money think that the government has answers for economic problems. (Actually, the government does have answers, but unfortunately they're the wrong answers.) So they accept, actually embrace, government control in exchange for their welfare payments; for "rebates" of taxes they never paid; and for a myriad of other government handouts. They accept these payments, which are actually bribes to vote for the party that provided them, with never a thought for where the money will come from.

The people who understand money know that, "There ain't no free lunch!" They know that the 2% of Americans that Obama calls "rich" can't pay for the other 98% forever. They know that as Obama's new taxes eat away at the "wealthy" 2%, the jobs they produce will be lost and millions more will be unemployed. And they know that Obama's repeated claims that no American who makes less than $250,000 will see his taxes increase is a LIE!

In his first five weeks in office, Obama has proposed an amount of government spending that is greater than all the money the US Government has spent from the time of the Revolutionary War until he was inaugurated. Unless there is a populist revolt that forces a good percentage of Democrats to jump ship (all but 3 Republicans voted against Obama's plan), Obama's spending will increase our national debt so much that we will not be able to pay the INTEREST on it.

And (here's a very important, very basic principle that Obama doesn't seem to grasp), EVERYONE BUT THE BUSINESSES will actually pay the taxes Obama imposes. Does he think that businesses will not pass the taxes on to consumers in the forms of higher prices for goods and services? Is the guy that ignorant of basic economic principles?

Obama and his flunkies attack the messenger to avoid facing the truth. Have you heard of any other president in history that issued an official statement from the White House every time someone said something about him that he didn't like? Instead of dealing with the substance of what media personalities have said, he or his press secretary have attacked Rick Santelli, Sean Hannity, Bill O'Reilly, Rush Limbaugh and Anne Coulter BY NAME.

Folks, this is not done. Presidents have complained about the media in general. But it has always been considered beneath the dignity of the Office of the President to attack individuals by name. (Obviously it is not beneath Obama's dignity.) He doesn't seem to realize that he lowers the office when he engages in this kind of name-calling. It's very similar to his naÃ¯ve attitude of negotiating face to face with dictators; he puts himself (and by extension, our nation) on their level.

Like so many of our freedoms, freedom of the press is being eroded under the Obama administration. How many in the press will feel free to comment honestly if they are afraid the President of the United States will attack them? And even if they have the courage to stand up to Obama, as these five have done, will their bosses allow them to expose their station or publication to vengeful attacks from the White House? Obama has even had the gall to "warn" Republicans not to listen to Rush!

White House spokesmen mentioned Rick Santelli BY NAME nine times in the first day after he spoke out on CNBC. This is what Robert Gibb's, Obama's press secretary had to say about Rick Santelli's observations about Obama's "housing plan":

"I've watched Mr. Santelli on cable the past 24 hours or so. I'm not entirely sure where Mr. Santelli lives or in what house he lives, but the American people are struggling every day to meet their mortgages, stay in their jobs, pay their bills, send their kids to school. I think we left a few months ago the adage that if it was good for a derivatives trader that it was good for Main Street. I think the verdict is in on that."

(Of course Santelli is not a trader of any kind. He is a reporter, and Gibbs knew that. He just wanted to whip up more of the class hatred that Obama is so fond of.)

Lawrence Kudlow called this, "...an unprecedented White House assault on the press, and asked "Is this how the Obama presidency is going to bully the press?"

Unfortunately, Mr. Kudlow, I think we can expect a lot more of the same. Obama is firmly committed to implementing a socialist style of government. In order to accomplish this, he needs to get more and more Americans addicted to government money. And he can't afford dissent.

The Republicans proposed a stimulus plan that would have cost half as much as Obama's, and would have created twice as many jobs. Obama rejected it because it didn't contain the pork he needs to pass around to pay back all the pols who got him elected. I think the Republican plan spent too much money we don't have, but it was 100% better than the one that was passed.

Conservatives have offered realistic plans to fix the housing crisis that would not require responsible taxpayers to pay the mortgages of people who have not been responsible. (I realize there are people who are in trouble through no fault of their own. But Obama's plan primarily bails out people who bought more house than they could afford, and does little or nothing for people who acted responsibly.) Of course, Obama rejected these plans because they didn't meet his political objectives.

Obama is on track to more than double the deficit with the spending he has already proposed, and he has told us that he will be coming back to Congress for even more money. But he also claims that he will "cut the deficit in half" by the end of his first term. That would be a neat trick. It reminds me of the dress shop that doubled the price of its products, then threw a 50% off sale...

An Eyewitness Account of the Boston Tea Party
http://www.earlyamerica.com/review/2005_winter_spring/boston_tea_party.htm