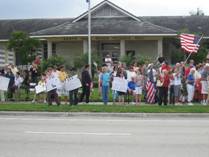 This week I will let the American people - at least the hundreds of thousands of Americans who attended Tea Parties in thousands of town and cities - write my column.

I attended a local Tea Party here in South Florida. (The photo, taken by Marine Corps veteran M.J. Leddy, shows some of the hundreds of fine people I demonstrated with.) The liberal media has characterized the people who attended the Tea Parties as flag-waving, Bible-believing conservatives - as if that were something to be ashamed of. I am proud to say that all the people I met were the kind of people you would love to have as next-door neighbors.

The White House has tried to characterize the Tea Partiers as rude, angry, rich white people who don't understand the intricacies of the economy. The interesting thing was that the only rudeness I observed was the curses thrown at us by people with Obama bumper stickers on their cars. And (as you will see from the signs below) we Party Animals understand economics better than Obama does. We know that if you spend more than you have, you go bankrupt.

The events were designed to be non-partisan, grass-roots demonstrations of the nation's disgust with Washington's wild spending sprees and gluttonous appetite for our taxes. So politicians were not invited to speak, but were encouraged to come and listen to what real Americans had to say. Attendees were of all races, religions and political persuasions. Although Conservatives and Libertarians were in the majority, because their main goals are limited government, it was not a Republican effort. And there were plenty of disillusioned Democrats who attended.

I was fascinated by the passion and creativity embodied in the signs carried by the Parties, and decided to make them the column this week. As you read them you will see patriotism, love of country, concern for our future - and, yes, anger at politicians. I was actually surprised that there wasn't more anger due to an Administration report that surfaced this week. It warned police that returning Iraq and Afghanistan war veterans, as well as conservatives who oppose abortion and illegal immigration, could become violent domestic terrorists.

The adults were no less passionate:
"The Silent Majority is silent no longer."
"It's not Republicans or Democrats. It's 'We, the people.'"
"Silence is compliance."
Â "Speak for yourself, Obama. We ARE a Christian nation."
"We will not go quietly into the socialist night."
"'The problem with socialism is that you eventually run out of other people's money.' - Margaret Thatcher.'"
"We've had enough! Stop rewarding failure"
Â "Obama lies, America dies."
"Cut taxes, not defense."
"Don't spread my WEALTH - spread my WORK ETHIC!"
"Obamaloney - $1 Billion a slice."
"Taking money from taxpayers to give to banks so the banks can LOAN it to taxpayers?"
"Beware of politicians bearing gifts."
"If I forget to pay my taxes, can I be Secretary of the Treasury?"
"I am NOT your ATM."
"For the first time in my life, I am ashamed of the President."
"Repeal the Pork."
"Karl Marx would be proud..."
"You can't stimulate jobs & investment by printing money. You just cause INFLATION!"
"Socialism does not work - ask Europe."
"Black people against Obama."
A California sign: "Pelosi is a criminal. www.RecallPelosi.com"
And, "Corrupt politicians and illegal immigrants are killing California. www.SaveOurState.org"
"Why am I paying my neighbor's mortgage?"
"STOP Congressional theft."
"DANGER! Out of Control Government."
"Even European leaders call Obama's financial plan 'The Road to Hell.'"
"Let failures fail!"
"Can we bankrupt the USA? YES WE CAN!" echoing Obama's campaign chant.
"The FED caused the economic crisis! www.EndTheFED.us"
"Clean house in 2010."
"Treason!"
A young lady's sign: "Read my lipstick! No new taxes."
"Socialism is not an American value."
"Power to the People - NOT the Politicians."
"Politics: Poli- the Latin root for 'many.' Tics- blood-sucking insects!"
"Proud American Capitalist."
"Give me liberty - NOT DEBT!"
"Free Markets - NOT Freeloaders"
"Cut the pork now!"
"Next time, read the bill!"
"We are Citizens - not Subjects!"
"Overspending = no change to keep."
"Stop economic slavery!"
"Support the Fair Tax."
A hand-lettered sign read, "I can't afford a better sign."
A sign in Philadelphia: "Goodbye, Arlen Specter. "Hello, Joe the Plumber."
"Enough is enough."
"Innovation, not taxation."
"Congress thinks money grows on trees - and that WE THE PEOPLE are the trees!!"
"The National Debt is $11,174,056,830,426.00. Every citizen, regardless of age, owes $36,516.50."
"The democracy will cease to exist when you take away from those who are willing to work and give to those who will not."
"Taxation with Moronic Representation."
"Don't mortgage America."
"Progressives destroyed our economy!"
"Washington - You've been TEABAGGED." (A reference to the hundreds of thousands of teabags that have been mailed to politicians.)
"Fight back, America!"
"Honor our Constitution."
"Real Americans only bow before God." (A reference to Obama bowing before the King of Saudi Arabia.)
"Stop spending - PLEASE!"
"It's not a REPUBLICAN THING."
"We're not going to take it any more."
"I want my children to be born in the USA - not the USSA."
"RIP USA. Born 7/4/1776. Died 1/20/2009."
"Honk if I'm paying your mortgage!"
"Quit using my taxes to bail out PRIVATE corporations."
"Born free - taxed to death"
"Socialism is UNAmerican!"
"Taxation WITH representation ain't so hot, either!"
"Stop the madness!"
"Stop spending my kids' money."
"Robin Hood and Obama - They were BOTH wrong!"
"Remember us - We the people?"
"I believe in God - So they call me a Right Wing Extremist."
"Stop punishing success!"
"Government is not the solution - it's the problem. - Ronald Reagan"
"If 10% is good enough for Jesus, it should be enough for the government."
"CHAINS we can believe in."
"Silent no longer!"
"JAIL Barney Frank and Chris Dodd - They started all this!"
"Know your rights - they'll soon be gone."
"Stop funding Islamic terrorism - Drill HERE! Drill NOW!"
"You can't fix Stupid - but you CAN vote them out!"
"Be heard - not herded."
"Obama is bankrupting America!"
A man's T-shirt read, "Conservative in Exile."
"Do you Miss America?"
"Read the Tenth Amendment."
"In God we trust."
"Taxation without deliberation is an Obamanation."
"Financial terrorism - made in the USA."
"I'll keep my Faith, Freedom, and Money - Obama can keep the Change."
"Government is not the answer - GOD is."
"Secure our Borders."
"Less spending! Less taxes! Less Government!"
"I RESIST liberal spending. www.IResist.com."
Â "Stop Subsidizing Stupidity!"
"Don't spend my child's future!"
"Socialism = Trickle-Up Poverty."
"Vote out everyone who voted for the stimulus."
"I believe in the Constitution - I'm a right-wing extremist."
"Obama is the biggest threat to homeland security."
"Term limits now!
"Hey, Obama - we're still clinging to our religion!"
There were LOTS of signs reading: "T.E.A. Taxed Enough Already."
A sign with a picture of Obama read: "GONE 1-20-13."
"People actually WORK for the money you spend."
"220 years to build the Republic - 1 month to destroy it!"
"So how's that HOPE and CHANGE thing workin' for ya'?"
There was a plaintive, "I want my country back."
My personal favorite, "America is GOOD! God bless America."

And on one carefully hand-lettered sign, God's promise to people who have gone astray: "If my people, who are called by my name, will humble themselves and pray and seek my face and turn from their wicked ways, then will I hear from heaven and will forgive their sin and will heal their land. - II Chronicles 7:14."