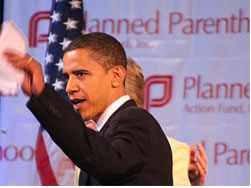 There is one area in which we cannot fault Obama. During his campaign he told us that he would be responsible for the deaths of hundreds of thousands of unborn children. And he has made a good start at keeping his word.

Of course, he didn't come right out and say that he would be the most bloodthirsty, pro-abortion president that this nation has ever had to suffer. He didn't openly say that he would sacrifice innocent human life on the altar of political ambition. But if you understand the code, it's not hard to understand what he is really saying, no matter what his words seem to mean.

Briefly, if you want to know what this man really intends to do, simply: (1) Ignore what he says; (2) Watch his actions; and (3) Remember that no matter what he says, he will always seek to implement his far-left agenda. (For a more thorough treatment of this concept, see "I'm Gonna Keep an Eye on You" at http://conservativetruth.org/article.php?id=1120 )

What Obama SAID in his campaign was that he wanted to reduce the number of abortions in the United States. But not one of his actions prior to his campaign supported his words. His votes, speeches and activism had all been more extreme than the great majority of abortion advocates. He even supported a law that made it illegal for hospitals to provide basic life support, including food, for babies who survive late-term abortions.

How about since his campaign? LifeNews.com recently compiled a long list of Obama actions both during the transition period following his election, and since he took office. They all put the lie to his promises to reduce abortions. They prove that Obama plans to make the womb the most dangerous place for a child - not just in the United States, but throughout the world.

I have selected some of the more egregious actions of our Pro-Death president to list below. To see the entire compilation, see the LifeNews website.

November 5, 2008 - Obama selects pro-abortion Rep. Rahm Emanuel as his White House Chief of Staff. Emanuel has a 0% pro-life voting record according to National Right to Life.

November 20, 2008 - Obama chooses former NARAL legal director Dawn Johnsen to serve as a member of his Department of Justice Review Team. Later, he appoints her as the Assistant Attorney General for the Office of the Legal Counsel. (NARAL is a virulent Pro-Death organization that advocates for the removal of ANY restrictions on abortions.)

January 23, 2009 - Forces taxpayers to fund pro-abortion groups that either promote or perform abortions in other nations. His decision to overturn Mexico City Policy sends part of $457 million to pro-abortion organizations.

January 26, 2009 - Obama nominee for Deputy Secretary of State, James B. Steinberg, tells members of the Senate that taxpayers should be forced to fund abortions. Nominee erroneously says limits on abortion funding are unconstitutional.

February 27, 2009 - Starts the process of overturning pro-life conscience protections President Bush put in place to make sure medical staff and centers are not forced to do abortions.

March 5, 2009 - The Obama administration shut out pro-life groups from attending a White House-sponsored health care summit. But Planned Parenthood, the nation's largest abortion business, was invited, as were other pro-abortion groups.

March 26 - Obama announced $50 million for the UNFPA, the UN population agency that has been criticized for promoting abortion and working closely with Chinese population control officials who use forced abortions and involuntary sterilizations.

April 7 - The Vatican rejected three Obama ambassador nominees because of their positions in favor of abortions.

May 5 - Details emerge about a terrorism dictionary the Obama administration together in March. The Domestic Extremism Lexicon calls pro-life advocates "violent" and claims they employ racist overtones in engaging in criminal actions.

May 8 - Obama's budget eliminates all federal funding for abstinence-only education.

May 17 - During his commencement speech at Notre Dame, Obama deceived listeners into thinking he wants a conscience clause, promoted embryonic stem cell research and misstated his pro-abortion record.

May 26 - Appoints appeals court judge Sonia Sotomayor as a Supreme Court nominee. Sotomayor has stated that the courts should create public policy (law), instead of interpreting the law as required by the Constitution. Sotomayor receives strong support from pro-abortion groups. Those who know her say she will be a strong advocate for abortion on the high court.

If you believe Obama is a moderate in terms of abortion (or anything else, for that matter), you have listened to his eloquent words and ignored his damning actions. That is a fatal mistake - for unborn babies.