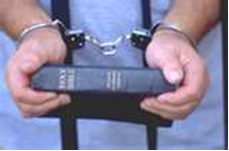 Last week I started a three part series on the New Minutemen - the Watchmen on the Wall who are determined to warn the people of America about the dangers that face her. The first article (see LINK below) concerned the danger of America losing its identity as a Christian nation - particularly in light of Obama's statement that America is not a Christian nation. Next week's article will discuss the very real possibility that our nation could lose its national sovereignty. Today we will focus on the loss of religious freedom (for Christians, but curiously, not for Muslims) in America.

As I started to research this article I thought about an article I wrote five years ago about a public school in New York which banned a Bible club from meeting on school property after school hours. The club had been meeting there for decades. But school authorities continued to allow Muslim students to leave classes several times each day for prayers in the school auditorium. And it made a special "safe place" designated by a pink triangle on the door available for homosexual and lesbian students to talk about their problems. At that time I said, "It can't get any worse than this." I was wrong.

You see, at that time there was something of a balance of power in this country between Conservatives and Liberals - between those who stand for the values upon which this nation was founded, and those who are determined to tear down everything that is good about America. Today both Houses of Congress are completely controlled by Liberals. The White House is occupied by an anti-American Liberal who just told an audience in Russia that the United States had little to do with ending the Cold War. And for the next four years, all Supreme Court (and all federal Appeals Court) appointments will be made by a liberal administration.

Think of it! All three branches of our government firmly in the grip of a political philosophy that is as anti-Christian as the Communist Parties of Russia or Cuba ever were. Don't ever forget that the philosophical roots of the Communists, the Socialists, the Progressives, the Liberals and - yes - the Democrats, are all in the failed, twisted maxim: Government knows best. They really, truly believe that the individual is stupid, and needs to be absorbed into the greater wisdom of the collective (remember the horror movie, "The Blob"?). I never could figure out how merging millions of stupid people into one huge collective mass would somehow make that mass wise, but that's Liberal thinking for you.

In any case, the fact that Liberals now control the government of the United States has emboldened some to take actions that just months ago would have been political suicide. For instance, on June 30, 2009, Democrat Speaker of the Pennsylvania House Keith McCall decreed that the Name "Jesus" could not be spoken in prayer in his House. He said that the Name of Jesus was "offensive."

Here's how it went down. Pastor Gerry Stoltzfoos of Freedom Valley Worship Center was invited to pray at the State House, but McCall's office insisted on censoring the prayer ahead of time. "I wrote the prayer and sent it to them and they sent back a very short rejection notice," Rev. Stoltzfoos told reporters. "So I wrote back, 'I'm curious as to why.' And they said it had an offensive word. 'Can you tell me what the word was?' And they came back and said 'Jesus.'"

This is just the tip of the iceberg. Once they see they can get away with an outrage like that at the state level, you will see them make their moves at the national level. Expect to see proposals by Liberals/Democrats to remove all Christian symbols from government buildings. They will try to remove "In God we Trust" from our money. You can also expect to see immoral people like Harry Reid and Nancy Pelosi rush to approve rules outlawing prayer in Congress. As I recounted in last week's article, similar attempts were made in the mid 1850's, but brave men in both the House and Senate stood up the Christian foundations and heritage of America, and refused to be bullied. Unfortunately, the brave and moral men and women are in the minority in Congress today.

But removing all Christian influence from our government is only the beginning of their plan. Like Soviet Russia, they plan to control every aspect of our lives. And they will start with our kids. Obama and Company have what they call their "Zero to Five" plan. They want to raise your children from the moment they take their first breath. (Remember the Soviet Communists' action plan: They took the children from their parents until they were six and indoctrinated them. After that they owned the children's minds.) Initial reports are that not only will he give incentives to parents who put their kids in government controlled day care, but he will also raise taxes on parents who refuse.

Do you like free speech? Don't get too used to it. The Obama administration is looking closely at Canada as a model for "Human Rights Commissions" to persecute Christians for so-called "Hate Crimes" like speaking the truth about abortion, homosexuals, or violent Muslims. (Don't get upset at the name; if they called the Hate Crimes Bill the "Persecute-Christians-for-Speaking-the-Truth-Bill" they would have a hard time passing it, even with Liberals in control.)

Liberals plan to use the IRS (big surprise!) to persecute Christians, as well. Obama says he wants to cut tax deductions for all non-profits to help pay for his huge bailouts and giveaways. But tax experts who have seen the plan say that it is clearly targeted at churches.

Obama slipped a zinger into the bailout bills, as well. Part of the money was earmarked for renovation of public schools. But one little-noticed provision precludes schools that rent space to churches on the weekends from receiving the federal funds.

Finally, if you love Christian radio, you're not going to love this. As Obama gets rid of Conservatives in the FCC (Federal Communications Commission) and replaces them with Liberals who will carry out his agenda, Christian radio will begin to come under attack. They plan to file dozens of bogus complaints against religious broadcasters and use them as the basis for shutting them down.

(They plan to do the same with Conservative talk radio, as well, using the so-called Fairness Doctrine. They will claim that the Fairness doctrine is being violated because Conservatives "own" talk radio. The Liberal shows fail, or have tiny audiences, while hosts like Limbaugh and Hannity have millions of listeners. Liberals won't apply the Doctrine to television, because Liberal shows dominate there.)

Liberals always trot out the imaginary doctrine of "Separation of Church and State" to justify their anti-Christian actions. There is no such concept in the Constitution, not even a hint of it. If you want to see how the Founding Fathers of this nation, the men who wrote our Constitution, thought about the integration of Christianity in the life of our nation (including the government), read my column from last week.

The only place where the subject is mentioned is not in the main body of the Constitution, but in the First Amendment, which reads:

"Congress shall make no law respecting an establishment of religion, or prohibiting the free exercise thereof; or abridging the freedom of speech, or of the press; or the right of the people peaceably to assemble, and to petition the government for a redress of grievances."

This is a whole article in itself. For now, just let me say that in the first phrase the Founders did NOT say that religion could not be a part of our public life. They said that there should not be a State-run religion. Most of them had experienced that in England. The Church of England was run by the government. The King or Queen was considered the Head of the church, and he or she appointed the Archbishop of Canterbury, the Anglican equivalent of the Pope. They didn't want our government to have that kind of power.

The second phrase makes it clear that Congress could not do what Obama's Congress is now in the process of doing: Prohibiting the free exercise of religion. They are not doing this openly. They are very crafty about it. I have given you a few examples of things they have done in this regard, as well as things they have planned. This brings me to my final point.

Your country needs you to be Minutemen and Minutewomen. Your weapons will be words and ideas. Your battlefields will be the hearts and minds of everyone you come in contact with, especially your children. Don't be like some of the people who write me and say, "I don't know what happened. My kids have grown up and become people I don't recognize, spouting all kinds of ridiculous propaganda."

In most cases that's because they let the public schools raise their children. They let the teachers instill values in their kids, instead of doing so themselves with the help of their church. They abdicated their responsibilities, and now they are reaping the harvest. The Bible says that if you train up your child the right way, when they are old, they won't depart from what you taught them.

Don't just sit around with your friends complaining about the Liberal takeover of America. Do something about it.

LINK TO The New Minutemen - Part I:
http://conservativetruth.org/article.php?id=1225