In Havana, Cuba, where my wife lived until she was 11, on every block there was a spy who informed on their neighbors to the Communist government. Castro announced this publicly to intimidate his opponents, mimicking the actions of Adolf Hitler who appointed civilian spies to inform him of anyone speaking against him. Now Obama's White House has publicly asked Americans to snitch on their fellow citizens. And they want us to send our information to a government website - www.Whitehouse.gov!

On August 5, 2009, in an official White House release posted on www.WhiteHouse.gov entitled Facts are Stubborn Things, the White House Director of New Media, Macon Phillips, stated, "There is a lot of disinformation about health insurance reform out there, spanning from control of personal finances to end of life care. These rumors often travel just below the surface via chain emails or through casual conversation. Since we can't keep track of all of them here at the White House, we're asking for your help. If you get an email or see something on the web about health insurance reform that seems fishy, send it to flag@whitehouse.gov."

So, just to make this clear: Obama has done something no president of this Republic, no matter how immoral or corrupt, has ever dared to do. He has asked our citizens to do what Communist Party members in Russia, China and Cuba have done for decades - inform on their fellow citizens. (I am sure other presidents have done this privately, but this man is so certain that he is untouchable, that no law applies to him, that he has brazenly made this despicable request in the most public way.) He has asked that we send him emails which may contain private conversations, but which also contain not only the sender's name and email address, but also (hidden in the headers) the IP address that identifies the computer the email was sent from. He also attempts to intimidate political opponents by asking that citizens report on private conversations with friends and acquaintances in which opposing views have been expressed.

It is obvious to many students of the Constitution and of federal privacy laws that Obama and Company has violated both by asking Americans to spy on their neighbors. In an effort to keep this article short, I refer you to the LINKS below, but especially to these articles:

But since Obama has opened this door, perhaps we should walk through it. What he is basically saying is that if you see disinformation, "fishy" or contradictory statements being made about healthcare "reform" you should report them to flag@whitehouse.gov

Let me suggest a few that come to mind immediately. Perhaps if just 10% of the 250,000 people who read Conservative Truth each week were to send emails like these to the White House they might begin to understand why more Americans are turning against ObamaCare with every passing day.

TO Flag@WhiteHouse.gov Dear Obama: I just heard something fishy. You know that Americans are afraid of losing their private health insurance, so you have been trying to sell ObamaCare by claiming that you are not in favor of Universal, government-controlled health insurance. But I just watched a video of you talking to an AFL-CIO Union convention (see LINK below) where you said, "I happen to be a proponent of a single payer universal health care program...But as all of you know, we may not get there immediately. Because first we have to take back the White House, we have to take back the Senate, and we have to take back the House." SO WERE YOU LYING THEN, OR ARE YOU LYING NOW?

TO Flag@WhiteHouse.gov Dear Obama: I just saw something fishy in a video of a press conference posted on the White House website. A reporter asked you if ObamaCare would put private health insurance companies out of business because: (1) ObamaCare would be cheaper because government does not have to make a profit and would be government subsidized. (2) Employers would switch to the cheaper plan. (3) Private insurers would then go out of business. You made a joke about your ears, then you rambled on for a while, but you never answered his question (perhaps because you didn't have a teleprompter). Anyway, that seemed fishy to me.

TO Flag@WhiteHouse.gov Dear Obama: There's something fishy about the way your people are selling the whole $1.5 Trillion dollar health spending bill. First you sold it as "Health CARE Reform." When it became clear that it was all about government control and that there would be no changes to the quality of health care, your Public Relations people apparently sold you on the idea of attacking the insurance companies (even thought he worst performing insurers are the government plans, Medicare and Medicaid). So your website now refers to your efforts as "Health INSURANCE Reform." But the person on the website that defends your wasteful, inefficient bill is called the Director of the White House "Health Reform" Office. So what's it all about, Alfie? Is it about health, about insurance, about health care - or just about more and more raw, naked power for you and the other Liberals in Washington?

TO Flag@WhiteHouse.gov Dear Obama: I have something very fishy - not to mention totally unconstitutional - to report. You have asked American citizens to report private conversations in which their friends have expressed concerns about ObamaCare. Whether or not you agree with the opinions of their friends, those conversations are protected under a document called the Constitution, in which Americans are guaranteed the right of free speech. Although you claim to have been a Constitutional Professor (a claim which the college where you were a mere lecturer denies), you seem to be woefully lacking in an understanding of the rights of US citizens. As the highest Constitutional officer of the land, you have sworn to PROTECT those rights - not to trample them under foot by keeping records of your political opponents on government computers. Should we start addressing you as Mr. Big Brother?

TO Flag@WhiteHouse.gov Dear Obama: I find it very fishy that you have not answered the three questions Senator John Cornyn sent to you almost a week ago asking, in light of the Federal Privacy Act of 1974 (see LINK below) which prohibits federal agencies from collecting "personally identifiable information about individuals" except under very strict guidelines. Cornyn asked, in part (see LINK below for the entire letter),

1)Â Â Â Â Â  How do you intend to use the names, email addresses, IP addresses, and identities of citizens who are reported to have engaged in fishy speech?

2)Â Â Â Â Â  How do you intend to notify citizens who have been reported for fishy speech?

3)Â Â Â Â Â  What action do you intend to take against citizens who have been reported for engaging in fishy speech? 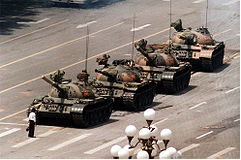 TO Flag@WhiteHouse.gov Dear Obama: One of the most fishy things about the whole health care debate is that your one party government rule seems intent on CRUSHING any debate. The video on YouTube (see LINK below) of a Federal SWAT Team with an Armored Vehicle confronting peaceful young people demonstrating on the National Mall last week is not only outrageous - it is a frightening portent of America's own Tiananmen Square police actions. The armored vehicle that the black-suited federal SWAT cops deployed against peaceful young protesters on our government's square was chillingly reminiscent of the tanks used against unarmed student protesters in China in 1989. The SWAT sergeant told one of the students, "You don't have free speech." First, the First Amendment to the Bill of Rights of the Constitution says that the government cannot pass laws that abridge freedom of speech or the right to peacefully assemble, so the statute that the SWAT cop quoted was unconstitutional because it required a permit for a peaceful protest. Second, the statute requires the permit only if there were more than 25 protesters; there were only 20. Third, with no provocation whatsoever, the cop threatened the student with his taser, a clear use of excessive force. Now, I know you will say that you didn't know anything about this, but I don't think anyone will believe it. The cops would never have acted in this aggressive manner if they hadn't known they would have your full backing.

One final suggestion, gentle readers. We often read that confession is good for the soul. Unless you are a certified Liberal Democrat, you have no way of communicating with the White House. Perhaps we should take advantage of this opportunity to communicate with Obama through this special link, in the form of a confession:

TO Flag@WhiteHouse.gov Dear Obama: I have a confession to make. I am totally, adamantly, irretrievably opposed to all of your Socialist plans for our great nation, including Socialist Universal Government-Controlled Health Care. I confess that I am a Right-Wing Extremist. I believe in all the things you oppose. I believe in God. I believe in the Constitution. I believe in limited government. I believe in the free enterprise system that has served our country so well for over two centuries. I believe marriage is a sacred covenant between one man and one woman. I believe that God creates a new human life in a mother's womb at the moment of conception, and that anyone who murders that innocent baby will be judged by God for that sin. In short, sir, I am a patriot citizen of the United States of America, a nation that almost every American except you knows to be a Christian nation.

You can be a spy for Obama

Does Obama want to do away with private insurance?

White House Blog Asking Citizens to Inform on One Another

Obama Video: "I Happen to be a Proponent of a Single Payer Health Care System"