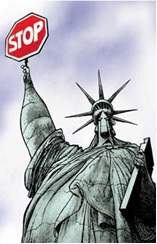 Anyone who does not realize that we are fighting World War III has his head in the sand. And anyone who does not realize that we are doing a poor job in the war is in denial. Yes, we are "taking the war to the terrorists", but we are doing nothing to stop the terrorists from bringing the war to us. As the British learned recently, allowing the enemy to freely immigrate is the equivalent of national suicide. And the United States he been no less foolish in this regard than Great Britain.

There are many things that we could do to prevent domestic terrorism, and we are doing a few of them (however tentatively and timidly). But we, along with our allies in Great Britain have failed to do what all nations at war have always done. We have failed to close our borders.

I'm not talking about "immigration reform." And I'm not talking about reducing the number of immigrants. I'm talking about completely cutting off all immigration. We are in a national crisis, and drastic measures are needed. We have too quickly forgotten the lessons of September 11, 2001. The murder of innocent civilians by Islamic terrorists in London and Madrid was a wakeup call not only for Great Britain and Spain, but also for the United States and all freedom-loving nations.

During World War II, no one in the United States or Great Britain would have suggested continuing to allow Japanese and German citizens to immigrate into our countries. But following 911, very few in our government had the courage to suggest that we stop allowing people from Arab and Muslim nations to immigrate. And those who did have the courage to make such a sensible suggestion were shouted down by their politically correct colleagues in the Congress.

People from other nations do not have a right to immigrate to our nation, although liberal one-worlders would have you believe the opposite. But we as a nation do have a right, and a responsibility, to protect ourselves from those who wish to harm us.

I am not suggesting that we deport Arabs and Muslims who are US citizens. However unwise our national leaders were to allow so many people from nations who hate us to immigrate here, those who are citizens have the same rights as every other citizen. But we should realize that many of their mosques are centers for terrorism, and that their religious leaders regularly call for the destruction of the United States and the murder of all Jews and all Christians. And our law enforcement community should not allow political correctness or fear of being accused of profiling from investigating any citizen suspected of terrorism.

However, there is absolutely no reason why we should continue to allow open immigration in a time of war. Forget all the garbage the liberals throw out whenever immigration is discussed. We do not need immigrants to fill jobs in the United States. Ask all the unemployed factory workers if we need more people to take the few jobs that are available. And we do not need immigrants to keep our economy going. Since a huge percentage of immigrants end up on welfare, our economy would be much better off without that drain on its resources.

I believe that we should immediately halt all immigration until such time as the threat has become manageable. We will never completely eradicate the fear of terrorism, but there are steps we can take to greatly reduce the threat. Closing our borders would be an important first step.

Of course, the Leftists have managed to portray the Japanese internment of World War II as some sort of domestic holocaust, rather than a reasonable exercise in prudence. They neglect to mention that the Japanese in US camps were well fed and well treated, in contrast to the American civilians who were starved, tortured and murdered in Japanese camps. Nonetheless, the Democrats and the Socialists will undoubtedly bring up the internment in an attempt to use misplaced guilt to disable America from protecting itself against its enemies now.

Some will say, "If the immigrants from Islamic and Arab nations are the major threat, why cut off all immigration?" If faced with a choice of totally closing our borders, or closing them only to Moslems and Arabs, I would prefer the former, but would settle for the latter. My reasoning is that there are many Jihadists living in nations that are friends to the United States. Just ask the British, whose most recent Islamic terrorists were British citizens. These radicals bent on killing Americans could slip in among others from friendly nations.

By the way, the Muslims who live in the West should be grateful that we do not follow their religion. If we did, thousands of them would have been slaughtered here in the United States following 911. Think what would have happened to Americans living in Saudi Arabia, for instance, if 19 American citizens had crashed planes there and killed 3,000 Saudis.

"But Tom, all Moslems are not terrorists. Why punish all of them?" First, not allowing them to immigrate here is not "punishment". As I mentioned earlier, no one has a right to come here. Second, even if they are not terrorists themselves, most are terror sympathizers by the very nature of their twisted religion. Remember the thousands of "non-terrorists" in Arab and Islamic countries who cheered and danced in the streets after they heard about the attacks on the World Trade Center?

However, the purpose of keeping as many Islamists and Arabs out of our country is not that they sympathize with the terrorists. It is that the terrorists hide among them. Muslims living in the West are well-known for keeping quiet about the terrorists among them, even those who are citizens of their adopted countries. And with the modern techniques of mass destruction that are available to them, it only takes a few terrorists to bring a nation to its knees.

Islam has long been associated with Nazis. Many Arabs and Moslems consider Hitler to be a hero. The fact that a handful of Nazis took over Germany is not lost on the Jihadists, whose stated goal is to force the entire world to bow down to Islam. Less than 2% of the Russian people were members of the Communist Party when that nation was taken over by the Communists.

History has shown us that a few dedicated, ruthless men and a complacent, foolish population are a recipe for disaster. Our nation has survived too much to be taken down by militant Islamists who believe they are doing Allah a favor by murdering our women and children. We must stop inviting murderers into our midst.