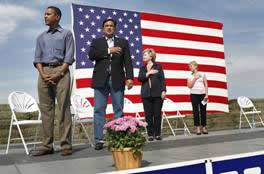 Is the American Flag Important? If one looks at the photo on www.ConservativeTruth.org it is clear that is not important to Barack Hussein Obama. Even Hillary had her hand over her heart as the National Anthem was being played. (The national Flag Codes prescribes that military personnel salute, and private citizens place their hands over their hearts when the Anthem is played.) But Obama just stood with his hands folded as everyone else present honored the flag and the National Anthem!

The photo was taken at a Democrat campaign event in Indianola, Iowa on September 16, 2007. Its authenticity has been verified by both Snopes.com and TruthOrFiction.com. To put it in context, Gov. Bill Richardson, Hillary Clinton and Ruth Harkin (the wife of Senator Tom Harkin) are pictured with hands over their hearts reciting the Pledge of Allegiance at the beginning of the ceremonies. The others on the platform who participated in the pledge (but are not visible in the photo) were Senators Tom Harkin, Chris Dodd, John Edwards and Joe Biden.

All of these people showed respect for our flag. They at least acted as if it mattered to them (although I believe some of them were just doing it because it was expected of them). Obama didn't even bother to pretend. He also refuses to wear an American flag pin on his suit, as all the other presidential candidates do. Obviously there is no law that says candidates must wear flags. But his obvious contempt for the flag extends to what the flag stands for - the country that it represents. Obama wants to be president of a country for which he shows no respect.

As I mentioned above, Hillary and many of the other Democrat candidates have no more respect for America and its citizens than Obama. Perhaps he should get some points for not pretending that he cares about and respects the country. But I doubt he will get many points from our veterans and other patriots who respect the flag and all it stands for.

John Edwards blew any real chance he had for the Democrat nomination a few weeks ago (see my article, "John Edwards Loses His Party's Nomination" at www.conservativetruth.org/article.php?id=79). This picture of Obama showing his contempt for our flag and the Pledge will undoubtedly do the same for him.

One organization we wouldn't expect to follow in Obama's footsteps is the Department of Veterans Affairs. Yet recently they made a decision regarding the flag and the flag-folding ceremony at the funerals of veterans that was just as contemptuous of the flag and what it stands for for the majority of Americans as anything Barack Hussein Obama did.

A single complaint by an atheist protested a few words in the Flag Folding ceremony that has been used at veterans' funerals for decades. These words referred to "God". How awful! One presumes that this is the same God Whose Name is used in our national motto, "In God We Trust." But the Department of Veterans Affairs decided to bow to the pressure of one atheist and deprive millions of Americans of the comfort of the ceremony. The National Cemetary Administration (part of the Department of Veterans' Affairs) banned the ceremony in all 125 National Cemetaries because of the one complaint.

The Department claimed that because government employees perform the ceremonies, it would look like the government was endorsing religion, and in the process offending atheists who hate God.

There are just a few problems with this:

When are we going to stop letting a few people who are too ignorant to recognize that our wonderful universe was created by a loving God dictate to the rest of us? Atheists make up far less than 1% of our population. When are we going to stop giving a tiny minority veto power over the vast majority who do understand that this complex universe could never have happened by accident? 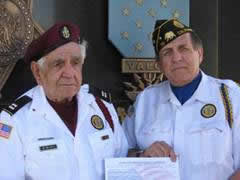 Veterans are furious. "That the actions of one disgruntled, whining, narcissistic and intolerant individual is preventing veterans from getting the honors they deserve is truly an outrage," said Rees Lloyd, 59, a Vietnam-era veteran and Memorial Honor Detail volunteer. "This is another attempt by secularist fanatics to cleanse any reference to God."

World War II Navy sailor Bobby Castillo, 85, another member of Memorial Honor Detail 12, called the federal decision "a slap in the face to every veteran."

"When we got back from the war, we didn't ask for a whole lot," said Castillo, who was wounded in 1944 as he supported the Allied landings in France. "We just want to give our veterans the respect they deserve. No one has ever complained to us about it. I just don't understand."

The pair is part of a team that has performed military honors at more than 1,400 services, said they were preparing to read the flag-folding remarks when workers in a staff car came up to them and stopped them.

Charlie Waters, parliamentarian for the American Legion of California, said he's advising memorial honor details to ignore the edict. "This is nuts. There are 26 million veterans in this country and they're not going to take us all to prison."

As to the main point of this article, when are patriotic Americans going to start standing up for the flag? Something is very wrong when the second in line for the Democrat nomination for the presidency can express contempt for the flag, and have the liberal press cover for him. (You haven't seen this covered on the liberal TV programs or in the liberal newspapers have you?)

Something is seriously wrong with our country when a city like Berkely, California, is allowed to discipline firefighters for flying the American flag on their trucks in a display of patriotism following 9-11. And something is decidedly wrong when the federal government itself attempts to deprive mourning families of the comfort of a ceremony that has been used for many decades.

I say "attempts" because the Department of Veteran's Affairs was forced to reverse its ban after 30 days when several things happened:

Symbols are important. One image can embody the sentiments of thousands of words. If you study the origin and evolution of our flag, you will be amazed at the richness of its symbolism and history.

American history is replete with instances in which the flag has rallied soldiers as well as citizens to great exploits of bravery and valor. True children of our nation are moved when they see the American Flag flying in its beauty and grandeur.

Should We Amend the Constitution to Make Flag Desecration a Crime?
http://www.usflag.org/amendment.html

To Purchase a U.S. Flag That has Flown Over the Capitol
http://www.usflag.org/capitalflag.html

THE FULL OFFICIAL TEXT OF THE FLAG-FOLDING RECITATION:

The flag folding ceremony represents the same religious principles on which our country was originally founded. The portion of the flag denoting honor is the canton of blue containing the stars representing the states our veterans served in uniform. The canton field of blue dresses from left to right and is inverted when draped as a pall on a casket of a veteran who has served our country in uniform.

In the Armed Forces of the United States, at the ceremony of retreat the flag is lowered, folded in a triangle fold and kept under watch throughout the night as a tribute to our nation's honored dead. The next morning it is brought out and, at the ceremony of reveille, run aloft as a symbol of our belief in the resurrection of the body.

The first fold of our flag is a symbol of life.

The second fold is a symbol of our belief in the eternal life.

The third fold is made in honor and remembrance of the veteran departing our ranks who gave a portion of life for the defense of our country to attain a peace throughout the world.

The fourth fold represents our weaker nature, for as American citizens trusting in God, it is to Him we turn in times of peace as well as in times of war for His divine guidance.

The fifth fold is a tribute to our country, for in the words of Stephen Decatur, "Our country, in dealing with other countries, may she always be right; but it is still our country, right or wrong."

The sixth fold is for where our hearts lie. It is with our heart that we pledge allegiance to the flag of the United States of America, and to the republic for which it stands, one nation, under God, indivisible, with liberty and justice for all.

The seventh fold is a tribute to our Armed Forces, for it is through the Armed Forces that we protect our country and our flag against all her enemies, whether they be found within or without the boundaries of our republic.

The eighth fold is a tribute to the one who entered in to the valley of the shadow of death, that we might see the light of day, and to honor mother, for whom it flies on mother's day.

The ninth fold is a tribute to womanhood; for it has been through their faith, love, loyalty and devotion that the character of the men and women who have made this country great have been molded.

The tenth fold is a tribute to father, for he, too, has given his sons and daughters for the defense of our country since they were first born.

The eleventh fold, in the eyes of a Hebrew citizen, represents the lower portion of the seal of King David and King Solomon, and glorifies, in their eyes, the God of Abraham, Isaac, and Jacob.

The twelfth fold, in the eyes of a Christian citizen, represents an emblem of eternity and glorifies, in their eyes, God the Father, the Son, and Holy Ghost.

With the thirteenth fold, or when the flag is completely folded, the stars are uppermost, reminding us of our national motto, "In God we Trust."

After the flag is completely folded and tucked in, it takes on the appearance of a cocked hat, ever reminding us of the soldiers who served under General George Washington and the sailors and marines who served under Captain John Paul Jones who were followed by their comrades and shipmates in the Armed Forces of the United States, preserving for us the rights, privileges, and freedoms we enjoy today.