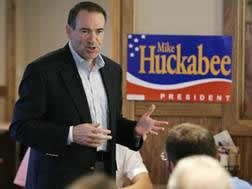 In my last article, "What is a Conservative?" (which can be read at www.conservativetruth.org/article.php?id=159) I stated that I had decided who I would support for President, but I did not announce my choice. I preferred to lay a philosophical foundation which I hoped readers would use in making their own choice before I stated my preference. As the title of this article makes clear, I believe Mike Huckabee should be our next President.

My sole hesitation in coming out for Mike was the fact that he had been portrayed as a tax and spend politician, one who would not fit my definition of a fiscal conservative. My investigation of the facts has proved to me that this portrayal was based on lies put forth by his political opponents. With this settled, I can wholeheartedly endorse Mike Huckabee for President.

These are the reasons I believe Mike is the best (and only) choice to be the next President of the United States...

First and foremost, he is a born-again Christian. To some people, this is a negative, because they fear he will try to force his religion down the nation's collective throat. Huckabee has made it clear that he would not do this, but it does bring up an interesting point.

Every person who aspires to the Office of the Presidency brings some sort of moral base with them. Most presidents have been Protestants of some sort. John F. Kennedy was a Catholic. Mitt Romney is a Mormon. Obama has Muslim roots, but claims to follow "the Christian tradition" (whatever that means). None of this causes any problem. But let a candidate make a clear stand for Jesus, and suddenly the Republic is in danger!Â

I think it is great that Mike knows what he believes! His likely opponent, Hillary, espouses some mushy version of Christianity, but it is clear that she really only believes in Hillary. (I suppose you could say her religion is Narcissism.) Would you rather have someone in the White House who has a strong moral base, or someone who has to check the polls to see what she believes?

Yes, Huckabee believes in the Bible, which means that we can trust him to do what he believes what is right for the nation, and that he will tell us the truth. That's a lot more than we can expect from Hillary, who is a professional liar.

Second, he has far more executive experience than any of his opponents in either party. Sure, Rudy ran a city, and a big one. But he never ran a state, something Mike did for ten years as Governor of Arkansas. And it's a fact that our most effective presidents have been former governors.

On the Democrat side, the front runners are two junior senators. Senators rarely make it to the White House, and only two of our 43 presidents were ever elected directly from the Senate to the White House. (Those were Warren G. Harding in 1921 and John F. Kennedy in 1961). So in addition to being pitiful excuses for public servants, Hillary and Obama have history working against them.

No, we need some insurance in the general election, and Mike Huckabee offers that. In his own words, "I have been up against the Clinton political machine four times, and I beat them every time." None of the other Republican candidates can say that. Lots of Republicans fail to realize how much political clout the Clintons still have and how much money they can raise, legally and illegally. Mike knows how to crush Hillary!

Finally, Mike Huckabee is right on the issues. Instead of me describing his stands on the most pressing issues of this election, let me allow Mike to speak for himself with brief quotes from his official website (LINK below). For more details on these issues, go to his website.

SANCTITY OF LIFE: I support and have always supported passage of a constitutional amendment to protect the right to life. My convictions regarding the sanctity of life have always been clear and consistent, without equivocation or wavering. I believe that Roe v. Wade should be over-turned.

IMMIGRATION: Securing our borders must be our top priority and has reached the level of a national emergency. I oppose and will never allow amnesty.

TAXES: I'd like you to join me at the best "Going Out of Business" sale I can imagine - one held by the Internal Revenue Service. Am I running for president to shut down the federal government? Not exactly. But I am running to completely eliminate all federal income and payroll taxes.

FAITH AND POLITICS: The First Amendment requires that expressions of faith be neither prohibited nor preferred. We should not banish religion from the public square, but should guarantee access to all voices and views. We should share and debate our faith, but never seek to impose it. My faith is my life - it defines me. My faith doesn't influence my decisions, it drives them. For example, when it comes to the environment, I believe in being a good steward of the earth. I don't separate my faith from my personal and professional lives.

HEALTH CARE: The health care system in this country is irrevocably broken, in part because it is only a "health care" system, not a "health" system. We don't need universal health care mandated by federal edict or funded through ever-higher taxes. We do need to get serious about preventive health care.

NATIONAL SECURITY: I believe that we are currently engaged in a world war. Radical Islamic fascists have declared war on our country and our way of life. They have sworn to annihilate each of us who believe in a free society, all in the name of a perversion of religion and an impersonal god...I will fight the war on terror with the intensity and single-mindedness that it deserves.

IRAQ: Iraq is a battle in our generational, ideological war on terror. General Petraeus and our troops are giving their all to provide a window of opportunity for the Iraq government to succeed, while the Democrats are running for the exit doors.

ISRAEL: I salute and support Israel as our staunch ally in the War on Terror and our greatest friend in that region...Israel is an important partner in the spread of freedom and democracy throughout the Middle East and the world...The United States must remain true to its long-standing commitment to the Israeli people.

THE SECURE AMERICA PLAN: A 9-Point Strategy for Immigration Enforcement and Border Security. Implement a broad-based strategy that commits the resources of the federal government to the enforcement of our immigration laws and results in the attrition of the illegal immigrant population.

In short, Mike Huckabee is a true Conservative in all the vital areas: Social, Fiscal and Defense. I don't see any other candidate who meets those criteria, so Mike has my vote and my endorsement.