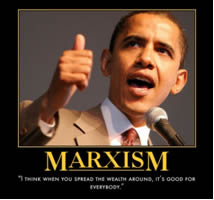 In case you can’t read the text of the quote under Obama’s picture, it says, “I think when you spread the wealth around, it’s good for everybody.” Yeah, everybody except the guy whose wealth has just been stolen from him!

And that’s what Obama and Company plan to do with your IRA and 401K plans. How do I know? Because I know how this guy works. And because he is running out of options. Desperate people do stupid things, and he is one desperate dude.

I’ve been warning my clients that he might steal our retirement accounts since he took office. Now I’m starting to see advertisements from companies that sell offshore investments and other investment products saying the same thing. I don’t claim to have a “mole” in the White House sending information on Obama’s plans as one of these advertisers claims. I’ve got something a lot better – history and logic.

Strangely, none of the companies trying to convince people to buy their products offers any rationale for their assertions. They simply say, “Obama is going to grab your IRA or your 401K,” and then proceed to tell you what they want you to do about it. Today I will give you solid reasons why I believe it is possible – even probable – that Obama and his Liberal henchman will steal your hard-earned retirement funds, and how they will try to justify doing so.

Argentina did it two years ago.

And Great Britain is seriously considering it right now.

“But that would be unconstitutional!” You’ll get no argument from me there. It was unconstitutional when FDR stole all the gold money owned by US citizens in 1933, and threatened to send them to prison for 10 years if they didn’t fork it over. But that didn’t stop him. And a little detail like violating the Constitution certainly won’t deter Obama.

Not long ago Argentina was the world’s third wealthiest nation. But in 2008 its government, led by President Cristina Fernandez, nationalized the country's private pension plans, known as AFJPs to pay the country’s massive debt. The control over these funds was turned over to ANSES, Argentina’s Social Security Administrator.

Last year Great Britain grabbed hundreds of millions of pounds from dormant bank accounts to fund social programs. So it’s not hard to believe that they will move ahead with reported plans to nationalize private pension plans there, using a plan modeled after Argentina’s.

Here’s why I believe Obama will move against our private IRA and 401K plans. First, as I mentioned above he’s desperate. He doesn’t want to be known as the president who presided over the demise of Social Security.

A decade ago the government projected that in 2019 Social Security would go upside down for the first time – in other words, it would pay out more than it brought in. Well, we hit that milestone nine years early. Two months ago the Social Security Administration announced that the System’s outgo had exceeded its income.

Of course, that just put an exclamation point on a sentence that had been written decades ago: “The Social Security System is bankrupt.” The money that was supposed to have been put into a “Social Security Trust Fund” has never been deposited there. It has always been used in the government’s General Fund. So the exact day that the scale was tipped was almost immaterial.

The question is, how do we deal with it? The obvious answer is that since all the Social Security money went into the General Fund, we should let the government pay it back out of general tax revenues.

The problem with that idea is that it is impossible. The US already spends the maximum possible from its tax revenues - 18% - to pay just the interest on the national debt. It hasn’t paid a penny on principal in years. The rest of the money goes for defense spending end untouchable entitlements – welfare, Medicare, and current Social Security spending. There is simply no more money available.

The National Debt is increasing by $4.13 Billion every day, and interest rates are starting to climb. Both of these facts will cause the 18% spent on interest for the National Debt to go up – but there’s no money available to pay for the increase.

Our population is aging, which will cause Social Security payments to rise. This is caused by two factors. Medical advances are helping seniors to live longer. And as a nation for decades we have been killing a huge part of the next generation through abortions – so there are fewer workers to pay into the Social Security System.

Are you starting to see why Obama is getting desperate?

But our Socialist-in-Chief has found what he considers to be a wonderful solution – trillions of dollars in IRA and 401 accounts that he can confiscate and roll into the Social Security System. That would beef up Social Security for decades to come, and, even more important, it appeals to his Marxist sense of “fairness.”

“After all,” his reasoning goes, “Why should someone who has worked hard all his life and put hundreds of thousands of dollars into a private retirement plan have a better retirement than someone who worked just enough years to qualify for Social Security? That’s not fair. We need to redistribute that wealth.”

OK, those are reasons why he may feel he needs to nationalize our retirement accounts, and his rationalizations for doing so. But what points to the likelihood that he will actually do this terrible thing?

I think the biggest clue is the fact that the IRS will only allow gold bullion in IRS accounts, not rare (numismatic) coins. The last time the government did a major confiscation was in 1933 when Franklin Delano Roosevelt issued an Executive Order requiring all Americans to turn their gold coins into their government or face felony charges.

Interestingly, he exempted numismatic coins from the order. Many explanations have been given for this exemption, but the real reason is quite simple. I call it the hassle factor. When citizens turned in their $20 gold coins they were given worthless $20 Federal Reserve Notes (the IOU’s that you have in your wallet today and fondly think of as money). They were told this was a fair exchange, and most people were too ignorant of the facts to protest.

However, people that had rare (numismatic) coins would have protested loudly if the government had tried to give them only the bullion value of their coins, because these coins have two kinds of value – their bullion (gold) value, and their rarity value. The government knew it would be too much hassle to deal with these claims, and since there were thousands of bullion coins for every rare coin, they exempted them.

Today the government will not allow IRA investors to hold rare coins directly in their IRA accounts, even though rare coins make many times the returns of bullion coins (such as Krugerrands, Maple Leafs or American Eagles). I believe this is for exactly the same reason. When the government nationalizes our retirement plans, they don’t want the hassle of dealing with the valuation of numismatics. They will simply say, “The spot price of gold was X on the day we took you account over, so your bullion was worth Y. Your stocks were worth Z. You are now the proud owner of shares in our bankrupt Social Security System.”

If you would like to explore some realistic alternatives to risky offshore investments as ways to protect your retirement accounts, I would suggest the free weekly Webinars sponsored by the US Investor Clubs and Christian Financial Concepts. To receive the notice, send an email to Webinars@Bellsouth.net.

I doubt Obama will be stupid enough to make a move on our accounts before the November elections. But after that, regardless of how the elections go, he may feel that he has to tap this enormous reservoir of money to save his presidency.

He and his teleprompter will make it sound like it’s for your benefit: “I want to save you from yourself. You’ve been out there on your own making risky investments. My government can make all those decisions for you, and you can just concentrate on making more money to pay more taxes with. I promise you, we’ll take care of you from the cradle to the grave, including making all your decisions about your job, your health and your family from now on. Doesn’t that sound great?”

Will Our Retirement Funds Be Forced to Buy US Treasury Debt?
http://retirementplantips.com/will-our-retirement-funds-be-forced-to-become-the-buyer-of-last-resort-for-us-treasury-obligations