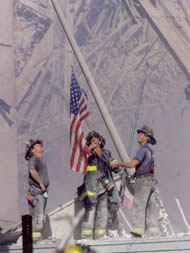 As a former firefighter myself, I was immeasurably proud to see the firefighters in the famous photo raising the US flag at Ground Zero. That was a brave statement that America was still strong, and that liberty was still alive and well.

Unfortunately there were those in our government who took advantage of the fear and turmoil caused by 9-11 to restrict the liberties that our flag symbolizes. I’m speaking of the Patriot Act, many of the provisions of which were good and needed. But there were also powers granted to the government that never should have been given, powers that will one day come back to haunt the senators and congressmen who voted for them.

But much has already been written on that subject, and that is not the purpose of today’s article. Today, on the ninth anniversary of 9-11, I am concerned about something that received a lot of attention in the past, but about which we hear little today: the National ID Card (NIDC). The reason we don’t hear much about it is not that the Obama Administration has shelved it – far from it. They are firmly committed to having the ability to track every movement of every citizen every minute of every day. They have just gotten a lot smarter about revealing their plans before they are ready to implement them.

Obama and Company have been working very hard to make their dream of complete control of the population a reality, and the NIDC is a key component of their strategy. I believe they are close to unveiling it, but don’t want to do so before the November elections because the political backlash would cost them seats in Congress. So I am going to go out on a limb here and predict that Obama will use the tenth anniversary of 9-11 to announce the implementation of the NIDC.

He and his teleprompters will make an eloquent, flowery speech honoring those who died on 9-11, after which he will explain to us that if we had only had these electronic leashes on our citizens, the tragedy could have been averted. What will be missing in his pretty speech (and what his adoring press corps will fail to ask him) is how citizens being forced to carry biometric ID cards would have kept terrorists from entering our country through its porous borders and attacking us from within.

What amazes me is how this two-faced excuse for a leader can on the one hand SUE Arizona for trying to enforce immigration laws which his government refuses to enforce; and on the other hand try to force law-abiding citizens to submit to the humiliation of carrying a national ID card everywhere they go. Police officers are not allowed to even question the immigration status of illegal aliens, but if Obama has his way US citizens will be detained if they don’t have a government ID.  What is horribly wrong with this picture?

It reminds me of the gun registration issue. They want citizens to register their guns so that they will know where to go to get them when the government issues the pick-up order. But of course the criminals won’t register their guns, so they’ll still have them after we’re disarmed.

Look how well that worked in Australia. Within two years after all the guns were registered, the government confiscated them. In the year following the confiscation, violent gun crimes – particularly against the elderly – increased by over 100%.

So the Administration wants us to be fingerprinted, photographed, and give blood and DNA (that’s right, it’s not like your driver’s license – this is biometric) to get our NIDC. But they are suing the State of Arizona and reporting them to the UN Human Rights Commission (populated by such human rights champions as Cuba and Syria) for the “crime” of trying to stop human smugglers, slave traders, drug dealers and terrorists from crossing our border from Mexico. When is Congress going to work up the guts to impeach this man?

If he doesn’t announce the NIDC a year from now, it will be because they haven’t perfected the technology. As I said, they aren’t content with an ordinary drivers-licence-like ID card. They want all the bells and whistles. If the first generation is not GPS-enabled, you can be sure the second generation NIDC card will be. You will be required to have it on your person at all times. This will be explained as being for your own safety, for instance if you are kidnapped. (How often have you been kidnapped lately?)

This is not James Bond decades-in-the-future imaginary stuff. The new US passport cards that will replace the booklets are already being tested for use between the US, Canada and Mexico. They contain a chip that has all you personal information, and you won’t even need to take it out of your wallet. The scanner will be able to “see” it as you walk through. More efficient, don’t you know.

Friends, the only way to stop this will for the majority of us to refuse to submit to it. If we don’t the next step will be implanting the same information in a chip in our hand or our forehead. This will be explained as helping us so that we won’t have to remember to put the NIDC in our pocket every day. How considerate!

Tonight, Monday, September 13 at 8PM (Eastern), we would like to invite you to attend an important free Webinar entitled "The Crime of the Century."

The subject is another crisis (the Great Depression) that another president (FDR) used as an excuse to commit another crime against our nation – the crime of taking away our money. Please read the description below and click the link to register and attend the Webinar.

“Almost 100 years ago, our nation's leaders did the unthinkable and made it a felony to posses all forms of US money. This outrageous act is little understood, but its significance rocks to the core the very principles that the US was founded upon. In this webinar noted financial expert Greg Halloway goes into great detail to explain the history of the events that lead up to this momentous decision. Greg has explained in previous webinars that US finances have been mismanaged and will likely lead to hyperinflation. However, tonight he will offer some rare behind-the-scenes historical information that will examine who is really in power.

“Like sheep lead to the slaughter, so goes the average US citizen who saves his dollars and trusts his government to be honorable. The truth may be difficult to deal with. The truth may be painful. And unfortunately, even knowing the truth will not stop the inevitable. But if you refuse to be sheep and act wisely you will be like a lion - prepared for the short term economic calamity that is about to unfold.”

TO REGISTER FOR AND ATTEND THIS WEBINAR:
1) You must register for this event: https://www1.gotomeeting.com/register/208184536
2) You will receive an email with your link to attend.
3) Because of the large size of the group, this is listen-only. You will be able to text questions and comments to the Organizers.

This weekly Webinar series is educational in nature and is free. The Webinars are held every Monday at 8 PM Eastern. You must register each week in order to attend. Feel free to invite others whom you feel would benefit from this education.

(IF YOU MISS THE WEBINAR, send an email to Webinars @ Bellsouth.net and request the recording of “The Crime of the Century.”)