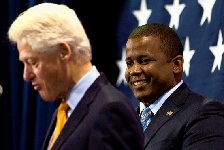 The Liberals are desperate in these last few days before Election Day, and they’re doing some desperate things. Slick Willy Clinton tried to talk the Florida Democrat Senatorial candidate into stepping down so that Charlie Christ – Florida’s sitting REPUBLICAN governor, running as a turncoat “independent” – could add Meek’s votes to his and beat the Republican candidate, Cuban-American Mario Rubio. And he did this with the knowledge and consent of the “first African-American” president, the ever-devious Barrack Hussein Obama.

The Democrats claim to be the party of diversity – but here we see them trying to subvert the will of BOTH parties as they fielded minority candidates. Clinton and Obama decided to meddle and support Whitebread Charlie Christ, a traitor to his own party with ethical issues concerning using Republican money for his Independent candidacy, while he is still serving as the Republican governor. Don’t get me wrong. I don’t have anything against white guys – I happen to be one myself. But the sheer hypocrisy of the Democrats on this one is mind-boggling.

This is just one of hundreds of examples of Liberal desperation. In Washington State Conservative Dino Rossi is challenging Liberal icon incumbent Patti Murray for her US Senate seat. In her ads Murray makes the insane charge that Rossi would deny unemployment benefits to abused women in shelters. This is typical of Liberals who appeal to emotion, hoping to block off the logical portion of the brain that recognizes that if a person has not been employed, they cannot draw unemployment benefits!

As expected, we have seen dozens of incumbents who voted for Obamacare and the other monstrous spending bills since Obama took office conveniently develop amnesia. They can’t remember voting for any of that bad stuff! In fact they don’t remember who Obama is. Most Democrats don’t want him anywhere near their campaigns, unless they live in the most liberal of districts.

The most desperate (and, to me, the funniest) are all the ads with no mention of the fact that they are Democrats. Check it out. Nine out of ten of the TV & print ads I’ve been seeing here in Florida don’t say “Democrat” after their name like they used to when they were proud of being Democrats. They don’t even have the little (D) after their name. It’s hilarious!

I have a 5” by 10” postcard on my desk from a Democrat named Jim Horn who is running for Congress. The only way I could tell that he is a Democrat was by going to his website, because he sounds like a Conservative on his literature. Listen:

“Fiscal Conservative
“Traditional Core Values
“Against Cap & Trade & Forced Health Care
“An Experienced Businessman with a Real Jobs Plan”
and on and on and on…
Then he gets really desperate:
“The national news shouldn’t determine who you vote for locally; politics is local.”
“Don’t Vote Party, Vote Person & Policy”

In other words, “I know you know my party is ruining the country, but I’m not like the other guys in my party. I’m the one good Democrat.”

My question for this guy (and all the other Democrats who are trying to pretend they are Conservatives): Why don’t you just bail out of the Dark Side? Don’t bother to answer. I know the answer. It’s because you really believe in Obama’s Socialist garbage. You’re just saying what you think you need to say to get elected. It will be back to politics as usual after the election. Except hopefully you’ll be working at McDonalds.

There’s other desperate stuff going on. Just like every other election, wherever Democrats control the Supervisor of Elections office, military personnel are having a hard time getting their ballots on time, and so their votes will probably not be counted. Just a coincidence, right? Not really, since military people typically vote Republican.

And then there are the reports of voting machines pre-programmed to vote for the Democrat candidates. And the Acorn types registering illegals again, along with felons, and even guys who are still in prison and jail to vote for – surprise! – Democrats.

All desperation moves. And all of this desperation makes us Conservatives fell good. And complacent. And therein lays the danger.

The last thing we need to be two days before Election Day is complacent. We need to get out and vote even if the press is calling for a landslide. The press has been wrong before, and don’t ever forget that most of the press are Liberals themselves. Don’t put it past them to try to skew the results.

We need to continue to encourage other Conservatives to vote. (Don’t worry about the Liberals. Let them sleep in.) Offer to give friends a ride to the polls if they need one.

And stay vigilant. We’re going to see even more dead people voting in this election than ever before. And remember that desperate people do desperate things. Keep your cell phone handy. If you see voter intimidation or fraud at the polls, use your cell to take a video, and have the person next to you dial 911.

One final thought. We don’t want to just win this election. We want to win BIG! We want a MANDATE. We want to win in such a big way that Obama will realize that the majority of the American people have repudiated what he has done since he was inaugurated. Otherwise we will have a vengeful, lame duck Congress that will wreak unbelievable havoc in the next two months, and Obama will sign everything they crank out.