Let me take this opportunity to tell you what Obama will not tell you about in his upcoming State of the Union address. By law he is bound to inform Congress and the nation of where the nation truly stands in terms of its security and soundness. Instead, he will toot his little political horn and tell us about his imagined accomplishments. And of course there will be the usual heart-warming stories of little people who have been helped by his various Socialist programs. But you will hear nothing about the true economic state of the Union, because talking about that would guarantee that he would not be elected to a second term.

First, we just surged past the $14 Trillion mark in the National Debt. The Debt grew by $1 Trillion in just the past seven months, and by nearly $3.4 Trillion in the less than two years Obama has been in office. Granted, some of that debt carried over from the Bush Administration. But keep two things in mind. During most of the Bush years Congress was completely controlled by Liberal Democrats. And Bush’s largest deficit (half a Trillion dollars in 2008) is dwarfed by Obama’s first deficit – 2.5 Trillion in 2009. And that was totally under the control of Obama and a rubber-stamp Democrat Congress. (The dark red bar in the chart at the right shows Obama’s 2009 deficit, which was five times larger than the 2008 deficit.) 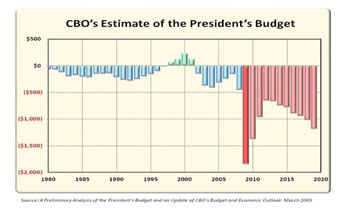 According to a report by the National Center for Policy Analysis, “The Unfunded Liability is the difference between the benefits that have been promised to current and future retirees and what will be collected in dedicated taxes and Medicare premiums.” Amazingly, this debt rose by $5 Trillion last year alone. If Congress does not act immediately, this monstrous gap can only be dealt with by huge tax increases, large cuts in benefits, or both.

Do you think your current payroll taxes for Social Security and Medicare are bad now? How would you feel about the government tripling them? That’s what is going to happen by the time today’s college students reach retirement age (if they can ever afford to retire).

But to cover the Unfunded Liability, by 2054 the Social Security deduction will have to increase by one third to 16.6%, and the Medicare deduction will have to rise seven-fold to 20.4%. That’s a total of almost 4 of every ten dollars in wages! Do you see a tax revolt in our future? What worker is going to sit still for 37% of his wage going to Social Security and Medicare – PLUS another 25% to 33% for Income Taxes.

The irony of both Social Security and Medicare is the lies that their founders used to get them passed. Franklin Delano Roosevelt (FDR) promised that his Social Security program would relieve future governments of the burden of caring for the elderly! And Lyndon Baines Johnson (LBJ) told America that his Medicare program would cost the average American family just $1.50 per month! (What is with these Socialists using their initials instead of their names?)

We’ll leave this subject with some scary figures:

So what’s the answer? The Congressional Budget Office (CBO) has done a study of what would have to happen to the Income Tax rates in order to allow the government to continue spending as it does now, and balance the budget:

We already have Americans giving up their citizenship and moving to more tax-friendly nations in record numbers. What do you think will happen if they increase taxes to that extent?

Thomas Jefferson, the third President of the United States, said, “I place the economy among the first and most important republican virtues and public debt as the greatest of dangers to be feared. To preserve our independence, we must not let our rulers load us with perpetual debt.” I wish his successors felt the same way.

History shows that the U.S. kept its debt in check until after the presidency of Andrew Jackson, who was the last president to serve with little or no debt. He left office with the country in debt just $18,000! By contrast, Obama spent $3 Million to redecorate the Oval Office – which didn’t need redecorating.

The challenge of balancing the budget and getting the nation out of debt is huge. But there are two practical measures that Washington can take right now that will take us in the right direction.

First, Congress can refuse to raise the debt ceiling. The measure to do that is before the House right now. Conservatives should draw a line in the sand and say, "Enough! No more! This is where Washington starts to learn to live within its means.”

Unless we get rid of the politicians who think that printing money is their free ticket to buy all the pork they want to buy votes they want, and start electing businessmen who know how to balance a budget, I fear greatly for this nation. We were once the world’s economic powerhouse. Now we depend on loans from Communist China to stay afloat.

Washington politicians should be ashamed. And we should be ashamed for putting them in office. Let’s make sure we do something about it next election. Don’t just look at party labels. Look for men and women who respect the Constitution, and who will pledge to balance the federal budget.