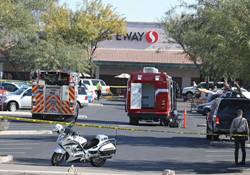 Wow! I thought I’d seen it all when it came to Democrats using tragic events to advance their political agendas. But the recent Tucson tragedy in which six died and 14 other were wounded puts all their previous shameful actions to shame. And to make it worse, it appears that the whole smear campaign was orchestrated at the highest levels of the Liberal hierarchy.

An obviously deranged man with a long-standing grudge against Democrat Congresswoman Gabrielle Giffords appeared at a Tucson, Arizona shopping center where she was speaking to constituents. He tried to kill her with a handgun, and almost succeeded. In the process he murdered six others, including a nine-year-old girl, and injured 13 besides Giffords. She will need many months to recover from the bullet he put in her brain.

Within hours the Liberal media and the Democrat establishment, while pretending to “try to make sense of this senseless tragedy,” were already trying to blame it on Sarah Palin and Republicans. They brought up some out-of-context statements Palin had made and tried to make it appear that she was inciting violence. And they blamed Conservative Republicans and the Tea Party for “creating a climate” in which such a tragedy could take place. Democrat Congressman Steve Cohen even compared Republicans to Nazis on the floor of the House this week!

Of course words can incite violence in certain situations, such as with mobs. But to imply that normal political discourse caused the Tucson tragedy is worse than irresponsible – it borders on criminal libel. If we are going to use the standard the Democrats have laid down in this incident, then Obama could well have been responsible for the shooting of Giffords. On June 13, 2008, during the presidential campaign, Obama said in Philadelphia (speaking of the Republicans), “If they bring a knife to the fight, we bring a gun.”

Isn’t it possible that Tucson shooter Jared Lee Loughner might have read Obama’s statement, and that it might have encouraged him to use a gun to attempt to kill Giffords? “Ridiculous!” you say. No more than blaming Rush Limbaugh for the tragedy because he opposed Gifford’s political leanings.

I started to write this article last week, but stopped when the truth about Loughner’s hate for Giffords, dating back to 2007, had come out, along with the fact that he was a habitual drug user. I hoped that since the real reason for the shootings had become clear, all the ridiculous speculation about “right-wing hate speech” causing this lunatic to go on his rampage would cease.

Unfortunately, as usual I was much too optimistic. Although they have toned down their hysterical rhetoric somewhat (they don’t want to appear too stupid), the underlying tone is still there. They’re like drug addicts or alcoholics; they just can’t control themselves.

The new “Party line” goes something like this: “Well, maybe this particular incident wasn’t caused directly by hateful Republican policies and the terrible Free Speech allowed to the Conservative talk shows, they are bound to cause similar incidents in the very near future. And who knows – even though Loughner was clearly a nut job who hated Giffords, maybe it was a Tea Party rally or a Glen Beck show that finally pushed him over the edge!”

So far, by my count, Democrat officials or Liberal media types have blamed the following for the Tucson tragedy:

Yes, the four million members of the NRA, mostly families who like to target shoot or hunt, were blamed by the Liberals for the Tucson murders. Every time a gun is used in a newsworthy crime, some talking head is sure to blame the “gun lobby.” But Bill Maher sank even lower than that on Jay Leno’s Tonight Show: “The NRA should just change their name to the Assassins’ Lobby.” They have been screaming that Conservative “hate speech” somehow caused Loughner to commit this atrocity. Don’t Bill Mayer and Jay Leno realize that theirs is the worst kind of hate speech?

Some of the worst (and stupidest) remarks from Democrats came out right after the tragedy. Pima County Sheriff Clarence Dupnik, a Democrat, knew none of the facts about the shooter when he rushed to get in front of the TV cameras with this rash political diatribe: "When you look at unbalanced people, how they respond to the vitriol that comes out of certain mouths about tearing down the government. The anger, the hatred, the bigotry that goes on in this country is getting to be outrageous," the sheriff said. "And unfortunately, Arizona I think has become the capital. We have become the Mecca for prejudice and bigotry."

His rush to exploit the tragedy to make political points for himself has created an increasing move to recall him from office, and is the reason many Arizonans call Dupnik “Dopenik.” Far from suddenly realizing in the wake of this tragedy that there is a problem, he has actually been a life-long political radical. College classmates describe him as, “very left-wing, quite liberal.” So it’s no wonder that he is now calling for a “National commission on civility.” The only thing that will accomplish is to give him 15 minutes in the national spotlight and maybe advance his little political career. When was the last time that a national commission on anything accomplished anything?

When will Democrats realize that spewing hateful rhetoric and lies in the process of accusing others of disseminating “hate speech” doesn’t work? They are extremely stupid if they think we are stupid enough to believe that families getting together to peacefully protest against unconstitutional taxes at a Tea Party could somehow incite mass murder.

I’m starting to believe that there must be some sort of required Stupidity Test that Democrat Party bosses are required to pass before they are allowed to issue press releases or speak at press conferences.