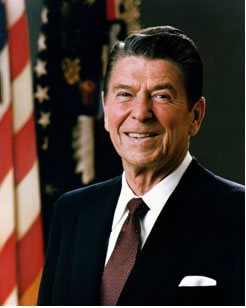 As I watched Lee Greenwood sing “Proud to Be an American” during a tribute to Ronald Reagan today, I was reminded of a time when I sang that same song. I was a soloist with a missionary choir tour that sang in several European countries. Most of the songs were religious, but one of the sections we did consisted of songs about America. When I did that solo I always thought about Ronald Reagan, because he was the first President that instilled in me that special feeling of pride in being an American citizen.

America has had 44 presidents. Most have been OK. Some have been truly awful. A few, like Reagan, have been exceptional. Interestingly, polls over the last decade – which include many young people who weren’t alive when he was president – show that he is considered the best president of our century, and ranks in the top three (after Washington and Lincoln) of all time. He was so loved that he won reelection to his second term with the largest landslide of votes of any president in the history of our nation.

He served our nation during the Cold War, a time which young people today have a hard time understanding. It was a war without guns and bombs, but with the ever present threat of nuclear destruction of the entire world. Reagan used his unique combination of grace, humor and strength to keep the spirits of the nation up. And he built up our military (which the Democrats had decimated) so that he could face down the “Evil Empire” of the Soviet Union from a position of strength. When he said, “Mr. Gorbachev, tear down this wall!” in front of the Berlin Wall, the whole world knew that Ronald Reagan had defeated Communism.

He had such a profound love for his country that was evident to everyone who was around him. He described America as “a shining city upon a hill whose beacon light guides freedom-loving people everywhere.” He believed in American Exceptionalism, an idea that is scoffed at by Liberals, which is a belief that America has a special destiny and responsibility to the rest of the world. In a word, he was an idealist.

He had a great sense of humor. Following his attempted assassination, he asked his surgeon before he operated, “Are you a Republican?” Other famous quips included, “It's true hard work never killed anybody, but I figure, why take the chance?” and    “Recession is when your neighbor loses his job. Depression is when you lose yours. And recovery is when Jimmy Carter loses his.” I often quote this one: “The nine most terrifying words in the English language are: “I’m from the government and I’m here to help.” I also love this one: “I’ve noticed that everyone who is for abortion has already been born.”

Reagan came into office with three main goals: cut taxes, build up the military and reduce the deficit. The Democrats fought him tooth and nail at every turn, and he was unable to balance the budget. As I mentioned earlier, he did dramatically increase the readiness and strength of our military. And he was successful at lowering taxes – more so than any other president. He cut marginal taxes across the board by 25%. And he cut the top marginal tax rate – the rate paid by the people who produce the jobs in this country – from 70% to 28%. The result was a period of unequaled growth and prosperity in America that lasted for many years after he left office.

Ronald Reagan had guts. Two examples: When air traffic controllers went on strike against federal law, he gave them two days to return to work and then fired all those who didn’t. That was a brave political move because of the power of the unions, but it was the right thing to do for the safety of the nation. And when Iran, after toying with fumbling Jimmy Carter for over a year, realized they were going to be facing Ronald Reagan in a few weeks they suddenly decided to release the embassy hostages. Why? Because they knew he wouldn’t hesitate to blow the towels right off their heads.

We’ve had some good presidents before and since Ronald Reagan. But we haven’t had one that made Americans as proud to be Americans as this great patriot did.

Today would have been the Gipper’s 100th birthday if he had lived. So, Happy Birthday, Mr. President.