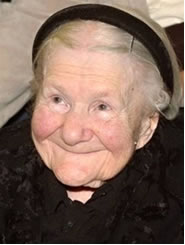 Unlike Oskar Schindler, whose story was the subject of Schindler’s List (a movie which won the Academy Award), Irena Senderlowa was relatively unknown until 1999. That was when four Kansas high school students researched her life and wrote and performed a play, “Life in a Jar” about how the young Irena risked her life to save thousands of Jews in the Warsaw ghetto. We should be thankful to those four teenagers (Megan Stewart, Sabrina Coons, Elizabeth Cambers, and Jessica Shelton), because Irena’s story is an inspiration to all who hear it.

Irena, commonly known as Irena Sendler, passed away in her Warsaw home on May 12, 2008. She left not only her family, but almost 3,000 Jews who owe their lives to her.

Irena was not Jewish. Like most Christians, she was horrified at the persecution of the Jews by the Nazis. But unlike many she risked her life to do something about it. In 1942 when rumors started to circulate about the plans of the Germans to exterminate the Jews in the Warsaw ghetto, she started making plans to save as many Jews as possible.

She began her rescue operation before she joined the organized Polish resistance. During this time she helped about 500 adults escape, including the man she later married. Later, with the help of 10 close friends (a group that eventually grew to 25) she saved the lives of 2,500 infants and children. This is her story.

Irena started small by making false documents for Jewish friends when the war started in 1939. She was an administrator at the Warsaw Social Work Department during the war, which gave her access to government records.

Her serious rescue work began in the summer of 1942 when it became apparent that the Jews of Warsaw would not simply be persecuted, but murdered. The underground group Zegota was founded in the fall of that year. Irena became the head of the children's division, and with her helpers she not only rescued thousands of infants and children, but placed them with Christian families who lied to the authorities by claiming them as their own children.

The Kansas teenagers named their play “Life in a Jar” because Irena buried the names of the rescued children on thin slips of paper in jars in a neighbor’s back yard. Her dream was to reunite the children with their parents. Unfortunately, when she retrieved the names following the war, Irena found that almost all the parents had been murdered in Hitler’s concentration camps.

As it became more and more dangerous to sneak people out of the ghetto, the decision was made to concentrate on the children. It was heart-wrenching for their parents to give them to strangers, even though they knew that it was probably the only way they would survive. Irena insisted that the teens doing the play about her work “always end your performance by saying the real heroes of the story were the Jewish parents and grandparents.”

At various times Irena posed as a nurse in order to bring medicine into the ghetto. She also pretended to a sewer inspector. She would drive a truck into the ghetto, returning with children hidden in it and babies in her toolbox. She would give the babies sleeping medicine to keep them quiet, and she carried a dog in the back who was trained to bark when she went through the checkpoint. The Germans didn’t want to deal with the dog, and never inspected her truck closely.

Irena and her friends also hid children underneath the stretchers while transporting sick people out of the ghetto, and hid them in trunks, sacks and suitcases when moving goods. They also used sewers and other secret passages, and removed many children through an old, unused courthouse at the edge of the ghetto. She also sometimes borrowed the credentials of a friend who worked in the contagious disease department, figuring correctly that no one would want to have anything to do with someone who might be carrying a contagious infection.

She was finally caught and put in Pawiak prison. She was tortured for days and had many of her bones broken during beatings, but she refused to give the names of any of her fellow rescuers. Finally she was sentenced to be executed. The night before she was to die, the underground bribed a guard to release her. She had to remain in hiding for the rest of the war.

The irony of this story is that this hero of a woman was nominated in 2007 for the Nobel Peace Prize. She was turned down by the Committee. Instead, Al Gore won the prize for a slide show on global warming. When the Nobel Committee honors someone like Al Gore, and gives the Prize to Obama at the beginning of his presidency for something they HOPED he would do, it is clear that the Nobel has become worthless to people of honor.

The International Federation of Social Workers (IFSW) expressed its disappointment that Irena Sendler had not yet been honored with a Nobel Prize:  “IFSW sends congratulations to Al Gore on winning the Nobel Peace Prize 2007…However IFSW is deeply saddened that the life work of Nobel nominee Irena Sendler, social worker, did not receive formal recognition', said David N. Jones, IFSW President. 'Irena Sendler and her helpers took personal risks day after day to prevent the destruction of individual lives — the lives of the children of the Warsaw ghetto. This work was done very quietly, without many words and at the risk of their lives. This is so typical of social work, an activity which changes and saves lives but is done out of the glare of publicity and often at personal risk

So it falls to those of us who understand and value true achievement to honor Irena Sendler by teaching our children and grandchildren to follow in her footsteps, and by instilling in them Biblical virtues and values by which to live their lives. After all, the Bible says that if you train up your child in the right way, when they grow old they will not depart from it. I’m certain Irena’s parents claimed that verse as their own as they raised their only child.