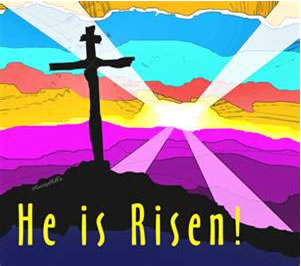 Yesterday was Easter Sunday. Over two billion Christians in congregations all over the world followed a tradition that is thousands of years old. The pastor, priest or leader cried out in a triumphant voice, “Christ is risen!” And the people responded with joy, “He is risen indeed!” It is because of the truth of this simple affirmation that the world, with all its many troubles, has hope today. For over 2,000 years Jesus Christ and His church have been the hope of the world.

But for some unfathomable reason the media has fallen in love with Islam. I am reminded of the media’s love affair with Bill Clinton which - even though mercifully he is no longer in office - continues today. No matter how much he lied, bungled, cheated on his wife or betrayed his country and his oath of office, to the press he could do no wrong.

It is the same with Islam. Muslims can slaughter Christians by the thousands, as they have done in the Sudan, without a harsh word from the mainstream media. Their clerics (known as Imams) can incite violence and murder against the West without fear of criticism from the talking heads on TV. Muslims the world over danced and cheered on 9-11, but the media continued to refer to Islam as the religion of “peace”.

But as John Berry, who pastored a church in Florida with me likes to say, “I cheated. I peeked at the end of the Book. We win!”

Fully one-third of the people on earth today describe themselves as Christians. (This includes all types of Christians, Protestant and Catholic, evangelical and liberal.) According to George Weigel’s article, “Christianity, By the Numbers” (see LINK below) in 1900 there were 558 Million self-described Christians. Today, 2.1 Billion of the 6.4 Billion souls on earth say they are Christians, close to double the number of Muslims.

In fact, Christianity is the dominant religion in five of six continents (see LINK below, “Worldwide Adherents of All Religions”). In only one continent, Asia, do Muslims outnumber Christians.

But Asia is another area where Christianity is making tremendous inroads. In an article about the growth of Christianity in Korea, for instance, Andrew E. Kim writes, “Today about one third of South Korea's 45 million people are Christian - 11 million Protestants and 3 million Roman Catholics.” The world’s largest Protestant church is in Seoul, South Korea. And in the article “The Rapid Growth of Christianity in Kazakstan” we find that in the past 10 years, evangelicals in this tiny Central Asian country just below Russia have grown from 10 to over 10,000.

In North America, 85% consider themselves Christians, and in South America, a revival among Protestants has pushed that number up to 93%. But some of the most encouraging data uncovered during the research for this article concerned young people.

An article on CBN.com describes a Christian youth rally in San Francisco where Christian teenagers were encouraged to resist a popular culture that glamorizes drugs, violence and sex. About 25,000 young people attended the two-day rally sponsored by Teen Mania ministries. What was amazing about this rally was that so many young people attended such an event in possibly the single most anti-Christian city in our nation. (San Francisco's heavily homosexual Board of Supervisors condemned the rally as an “act of provocation” by an “anti-gay” group. Only San Francisco would classify a group as “anti-gay” simply because it was Christian.)

If you don’t read any of the other articles offered in our INTERNET RESEARCH section below, please read Youth on the Edge. Its author, D. Michael Lindsay, is a popular speaker who currently serves as the consultant for religion and culture to the George H. Gallup International Institute. He is the co-author with George Gallup of two books on faith and culture.

His in-depth research presents an entirely different picture of the faith of young people than the liberal media and the garbage coming out of Hollywood would lead us to believe. Here are a few quotes: “The spiritual hunger among teens is remarkable. Millions of teens attend church and youth groups regularly. Teenagers express a burgeoning interest in learning about other faith traditions, yet most remain faithful to their own orthodox beliefs.”

“The Gallup survey showed that 92 percent of teens consider their religious beliefs important to them. A third say faith is the most important influence in their lives. That number goes up to 52 percent for African-American teens. Close to four in ten say they pray alone frequently (42 percent) and read the Bible at least weekly (36 percent).”

The most exciting information in this article pointed to a trend in which teens are becoming more spiritual than their parents. The Gallup Youth Survey demonstrated that teen church attendance is 10 percent higher than the national figures for adults, and 95% of teens said they believe in God. 60% of Protestant teenagers surveyed had attended in the past week, and 65% of all teenagers had attended a youth group at some time. When Gallup asked them why they became involved, 82 percent% said they wanted to learn more about faith.

I don’t know about you, but I find all of this very encouraging. Jesus said in Matthew 16:18, “…I will build my church; and the gates of hell shall not prevail against it!” Jesus Christ is risen - indeed! And His church is rising in the world today in preparation for His second coming. Be ready.

(PUBLISHER’S NOTE: Special thanks to Pastor John Berry for his expert research for this article.)

Youth on the Edge
http://www.religion-online.org/showarticle.asp?title=2929

Christianity, By the Numbers
http://www.the-tidings.com/2005/0204/difference.htm

Worldwide Adherents of All Religions by Six Continental Areas
http://www.zpub.com/un/pope/relig.html

Major Religions of the World
http://www.adherents.com/Religions_By_Adherents.html