Listening to Obama’s self-congratulatory description of the killing of Osama turned my stomach. During his announcement he used the personal pronouns “I,” “me” and “my” more than ten times. The SEALS who actually did the job were almost completely ignored and were never mentioned except as “a small team of Americans.”

Listening to his slobbering sycophants in the mainstream media was even worse. Liberal columnist Howard Fineman: “By calmly and meticulously overseeing the successful targeting of Osama bin Laden, President Barack Obama just proved himself - vividly, in almost Biblical terms - to be an effective commander-in-chief of the armed forces of the United States.”

The only thing Obama “proved” was that he could lick his finger and see which way the wind was blowing. (More on this later.)

The fact is that Obama is on record stating that capturing or killing Osama was not his priority. In a CBS interview on January 14, 2009, he stated that removing Osama bin Laden from the battlefield was no longer essential and that America’s security goals could be achieved merely by keeping al-Qaeda “on the run”.

This was in sharp contradiction to his statement in the presidential debate just a few months earlier when he promised on October 7, 2008, “We will kill bin Laden…That has to be our biggest national security priority.” After taking the oath of office, he flip-flopped when he stated that his Number 1 priority” was to protect America from further attack.

As you read about the events leading up to Osama’s death, decide for yourself which has a greater ring of truth: the cool, analytical Obama described by the White House propaganda ministry, or the insider stories describing the indecisive, goofy coward that we’ve become familiar with over the last two and a half excruciating years.

I believe Rush Limbaugh had the president nailed when he said that, “After the consensus has developed, Obama gets on the white horse and races to the front of the parade, taking credit for whatever the cause is, and that’s where he is now.” Leaks from his Obama’s own staff show that Obama was afraid to take out Osama, but was shamed into doing so.

To further underscore the fact that Obama’s heart was not in the mission to kill Osama, consider the fact that if Obama had had his way regarding Guantanamo, the mission would have been impossible. Both as a senator and as president, Obama tried to undermine the ability of our intelligence professionals to extract information from the detainees at the Guantanamo Bay detention facility. He even promised to close this facility which has provided invaluable intelligence that has saved countless American lives.

I believe that Obama’s prime motivation in going ahead with the mission to kill Osama was political. Obama is sinking in the polls. The majority of Americans believe that he is leading the nation down the wrong path. He became convinced that this operation would insure his reelection. In fact, immediately after the announcement of Osama’s death was made, Democrats all over the country were crowing that this would make his reelection a “slam-dunk.”

“This is a definitional moment for voters,” said Democratic strategist Geoffrey Garin. “There’s no question that the Republicans will make a ‘national security’ run at the president in 2012,” he said. “But the most tangible thing for voters will be that Obama got the central job done...Voters will notice.”

“This was done for national security reasons, not political ones,” said Democratic strategist Mark Mellman, “but the political impact is clear. No one is going to be able to run on a theme that the president is ‘weak on defense’ or ‘weak on terrorism.’”

In a 60 Minutes interview on May 8, the interviewer asked, “Was the decision to launch this attack the most difficult decision that you’ve made as commander-in-chief?” Obama’s grave answer: “This was a very difficult decision.” This has been a typical theme of the commentary from the liberal media: Brave Obama making a heart-wrenching decision. What about the bravery of the men who actually did the job? What about the decision they made to risk their lives while Obama sat in his $2,000 chair pushing buttons?

Obama stated, “We got the man who caused thousands of deaths.” It wasn’t “we” who got Osama – it was the SEAL team. But not once during this interview or during the nine minute announcement on May 1 did he mention that it was SEALs who risked their lives at his order. He made many references to the intelligence and counter-terrorism people who planned the operation. But he only referred to the SEALs as “a small team of Americans” and “our military people.” I doubt he even knows who the SEALs are.

Two big mistakes Obama made in the interview had to do with his characterization of Osama and Pakistan. He said, “Bin Laden was not a Muslim leader.” Well, he was a Muslim, and he led Muslims to kill 3,000 Americans. What part of that does BHO not understand? He also supported Pakistan, again calling them our “partners in the war on terror.” If that is true, how did Osama build a huge million dollar compound a thousand feet away from Pakistan’s main military academy, and live there unmolested for almost six years? Either they are the most stupid military people in the world, or they were protecting Osama. Obama must believe the latter, because he didn’t inform Pakistan before we invaded their nation without permission. If he really believed they were on our side, he would have informed their president, at a minimum.

Obama was quick to use the operation for political advantage. Jim Messina, his campaign manager, emailed supporters encouraging them to watch the 60 Minutes interview. The email included a link to a listing of all of the network’s local affiliates around the country - and another one requesting donations to Obama’s re-election effort. 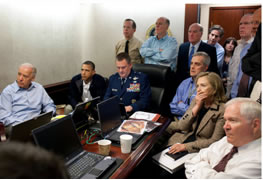 I think the most interesting aspect of all of this is the leaked information that Leon Panetta, not Obama, actually made the decision to go after Osama. As I mentioned above, this information comes from White House insiders who want to keep their jobs, and so it cannot be independently verified. But as you read the information, ask yourself which narrative resonates with what you know about Obama. Has he really changed from a gutless wimp into John Wayne? Or did he waffle until he was pushed into making the decision by political motivations and fear of what would happen if he failed to act?

In brief, here is what has been reported. (For more detail, read the articles linked in the Internet Resources below.) Obama’s military advisors as well as Hillary Clinton and Defense Secretary Bill Gates all supported the operation. Valerie Jarrett, Obama’s political crony from crooked Chicago, opposed it.

Jarrett was concerned that the military action could fail and harm the president’s already weakened credibility with the American public and with other nations. She also feared that the attack would upset Muslims. According to the insider reports, every time Gates, Clinton and the military people had Obama convinced to go ahead, Jarrett would use her considerable influence to stop him.

Bill Gates was so frustrated with the president’s cowardice and vacillations that he threatened to resign. Hillary Clinton was so furious that her office started a campaign of anonymous leaks to the press over the issue. Finally, Leon Panetta told Obama that the fact that the CIA knew where Osama was would be bound to get out sooner or later. He convinced our “brave” president that continued inaction would create a public backlash that would be “…significant to the point of political debilitation.”

At that point Obama gave Panetta permission to plan the campaign. As instructed by Valerie Jarrett, Obama told Panetta that he would have “sole discretion” to act against the bin Laden compound. When Panetta discussed this with Clinton and Gates, they warned him that this was a trap. They felt that if the operation failed, the president would scapegoat Panetta. Both promised to defend him if this happened. Panetta felt that getting Osama was important enough that he was willing to take that personal risk.

What Obama and Jarrett did not know was that Panetta had already been planning the operation for several weeks, and that all the parties involved reported only to him – not to the White House.

Gates and Clinton went to Obama’s chief of staff, Bill Daley, who agreed that the president should give open approval to the plan, rather than the secret directive he had given Panetta. He discussed this with Obama, but Jarrett refused to allow the president to give his approval.

Daley then told Clinton that he would also support Panetta if the operation failed, even if it meant telling the American public about the his boss’s inability to make a decision. Clinton took this message to CIA Director Panetta, who issued the 48-hour engagement order – without informing Obama or Jarrett. To be clear, the order to proceed against Osama did NOT come from Obama, as he later claimed; it came from Leon Panetta, who had the backing of Obama’s most senior advisors. In effect, this was a palace coup.

Valerie Jarrett somehow learned of the order and issued an “abort mission” order, which was followed by a similar order from Obama. This delayed the operation for 24 hours, and was later explained away as a delay due to weather conditions (even though the storm front used as an excuse had already passed by the time Jarrett intervened).

The stalemate ended when Gates and General Petraeus pushed Obama to ignore Jarrett and stop his waffling. The operation then proceeded without further interruption and Osama was killed.

Some sources say that Jarrett is now threatening to resign. It is doubtful that will happen, because her position and her relationship with Obama offer her considerable protection against possible indictments for political corruption back in Illinois.

This version of the story is very credible when you consider that – even though she is not an elected official - Jarrett has massive influence she has over Obama’s administration. This fact is widely acknowledged. She even pushed Rahm Emmanuel out of the White House in order to consolidate her power as “Senior Advisor” to the president.

According to Wikipedia, Obama has a relationship with Jarrett that has lasted 18 years. It began when she was chief of staff for corrupt Chicago Mayor Richard Daley and she gave Michelle a high-paying job. Obama: “Well, Valerie is one of my oldest friends.” He is quoted as saying. “Over time I think our relationship evolved to the point where she’s like a sibling to me…I trust her completely.” He further said, “She’s family; she combines the closeness of a family member with the savvy and objectivity of a professional businesswoman and public policy expert” and that he “absolutely” runs every decision by her.

It also rings true when you consider the personalities of the players and their relationships to one another. Everything that the insider leaks attribute to Gates, Clinton, Petraeus and Jarrett squares with what the public knows about their motivations and the way they operate. Gates and Petraeus believe in a strong defense. Clinton has spoken out strongly about the need to combat terrorism, while Obama constantly defends Islam. And Jarrett is a completely political animal – more concerned with how an action might impact an election than with the safety of the American people.

In addition, credible sources including the BBC and numerous news sites are now reporting based on their sources that Jarrett was the only senior White House official who steadfastly advised the president against the operation.

We may never know if Obama’s account or the one being reported is the true version. But given Obama’s long history of lying to the American people…