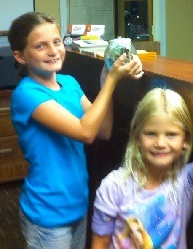 I serve on the Board of a wonderful organization named Christian Youth Theater (CYT). CYT was founded in San Diego in 1981. Since then it has grown to become the largest children’s theater organization in America with 31 branch programs in 13 states.

CYT’s goal is to develop character in children through the arts. It accomplishes this through after-school training programs in the theater arts (acting, singing and dancing) led by dedicated teachers. Branches also conduct summer camps. In fact, our West Palm Beach branch has a one week day camp starting July 11, which still has room for a few campers.

It was at a recent Board Meeting about the camp that we learned about the Jesus Bank. Our Artistic Director, Rachel Sharpe, shared the wonderful story below with us. I thought it  would inspire you. It certainly blessed all of us as we heard it.

Let me allow Rachel to tell the story in her own words: “In the midst of the busyness and preparation for the summer camp, God decided to show up through the gift of a little girl. I received a call a little over a week ago from a CYT mom saying that her 10 year old daughter had something to give me. This was a gift that had to be given in person. So we set up a time to meet.

“Maddie, along with her mom and little sister, showed up and presented me with her glass piggy bank. For three years Maddie had been saving her allowance in this little piggy bank in order to bless someone. She had decided to give her hard earned money to the CYT West Palm Beach Camper Sponsorship Fund. She wanted to bless another child with the opportunity to attend CYT Summer Arts Camp. I am thrilled about how the Lord is going to use Maddie’s selfless gift to impact the life of another camper. This is exactly the type of character we want to encourage and develop in kids here at CYT West Palm Beach. Way to go, Maddie! Thank you for being an example to all of us.”

The Mission Statement of CYT reads, “CYT is dedicated to developing character in children and adults through training in the arts and by producing wholesome family entertainment, all of which reflect Judeo-Christian values.”

My wife and I decided to enroll our daughter Sarah in the Summer Arts Camp (and in CYT’s  Fall after-school program) after attending an introductory meeting led by Paul Russell, the founder of CYT. Sarah is interested in singing and acting, and has taken dance classes in the past. She is a very creative child who taught herself to draw, and has started writing a book. We wanted to encourage her creativity, but it was essential to us that any training in which we enrolled her take place in a wholesome environment. We immediately recognized that CYT was the answer to our prayers.

There was in initial meeting for both children and parents. Then Rachel and the other teachers took the children to a rehearsal room and Paul spoke to the parents about CYT’s goals and methods. Then the children returned with a surprise: In 30 minutes they had been taught a song and dance routine which they performed for us! Both the children and the parents were excited over the evening.

Sarah was glowing as we drove home. She had been planning to attend the Christian youth camp she went to last summer, but it was being held the same week as the CYT camp we had just learned about. My wife and I told Sarah she needed to make the choice. She had loved the sleep-away camp the previous summer, and had many friends there. But after some deliberation, she decided to attend CYT’s day camp because of all she could learn there.

For those of our readers who live in South Florida, the Summer Arts Camp will be held July 11th through the 15th at the Fern Street Theater (part of Palm Beach Atlantic Universtity) in West Palm Beach. There will be a performance by the children on Friday night at the Theater. There is space for a maximum of 40 campers, and we currently have space for 5 children.

Also, if you are interested in enrolling your children (ages 4 to 18) in the Fall training classes, they start August 29. Write to WestPalm@CYT.org for information about either the Camp or the Fall Classes. If you don’t have children or grandchildren of these ages, but you would like to help, we offer volunteer opportunities that you will find rewarding.

Wherever you live, if you are interested in helping build character in children in a godly environment, there are two ways you can participate. Most of the 31 CYT branches were started by parents who had children in CYT programs and then moved to a different city or state. Realizing the value of the influence of the program in their children’s lives, they helped start programs in their new cities. The National program offers a lot of help in that regard, with well-planned programs and checklist (even a website) to make sure you get off to a good start.

The other way you can help right away is to sponsor a child for the Summer Arts Camp. There are some children who would love to attend but their families cannot afford to send them. If the Lord is speaking to you to help with this need (or to donate to the general expenses of CYT as it prepares for the Fall Classes), please write to WestPalm@CYT.org.

I don’t want to sound trite, but our children are quite literally our future. The time and money we invest in building godly character in these precious young people will pay huge dividends in the future.