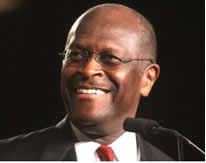 Two young boys have been fighting for what seems like an eternity to their dad, but has actually been just a little over an hour. Constant sniping and poking and repeated cries of, “He started it!” are finally too much. Dad yells, “Go to your rooms!” to the immature boys.

That’s what I felt like Thursday night. I was in the auditorium in Orlando watching as Perry and Romney embarrassed themselves, the GOP, and everyone who worked so hard to put on a good debate where potential voters could find out what the candidates stood for. Instead these two little boys wasted our time, dominating the debate with their endless name calling and “Gotchas” about what was in each of their books.

Who cared? Certainly not the audience.

Because of my wonderful wife, I had a front row seat for all the political excitement in Orlando this week. She had the absolutely brilliant idea of getting me a ticket to the Florida CPAC (Conservative Political Action Conference) for my birthday present. CPAC called the week before we drove up there and asked me if I would like a free ticket to the debate. You can imagine my answer. (The tickets cost $125 each; on Thursday night people were offering organizers their choice of an arm or a leg in exchange for a ticket.)

Before I get into what I heard and saw, let me say that – unlike most of my articles – you will not be able to discern my personal feelings from this article. In other words, at the end of this piece you will not know which candidate I am leaning toward. That is deliberate. I want to just report on what I experienced. Any praise or admonishment is simply due to what the candidate did or said, not because I want to elevate or diminish that person.

First, I must confess that I am an avid debate watcher. I even take anti-nausea medication and watch the Democrat debates, because the Bible advises that before going into war a smart man learns all he can about his opponent. I have seen dozens and dozens of debates over the years. But this was my first opportunity to see what goes on in person, without having a TV producer decide what I can see as far as audience reactions. It was an eye opener.

The most important take-away from the debate was that much of the audience quickly tired of the immaturity shown by Rick Perry and Mitt Romney. They stopped responding to their cute jokes and one-liners. I heard frequent mutters of things like, “Shut up and get on with the debate” from the people close to me. 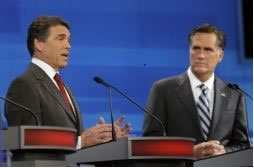 (Don’t worry; this wasn’t a Democrat debate; Conservatives are much too polite to stand up and shout what they are thinking. One sweet little lady in my row got so sick of it all that she quietly called out, “Boo.” But then she apologized when a man next to her explained that booing was impolite.)

Two of the debaters got spontaneous reactions to some of the things they said that were just the opposite. They were Herman Cain and (surprisingly, to me) Ron Paul.

I wasn’t surprised because I don’t like Ron Paul. I was surprised because the TV cameras seldom let us see how the debate audiences respond to Paul. The audience responses were visceral and enthusiastic. Even people wearing buttons with other candidates’ names on them were cheering Paul on.

By the way, speaking of buttons and political paraphernalia, the most popular button by far was one that read, “It’s the $pending, Stupid.” And I have to tell you about the funniest thing I saw – a blue yarmulke (skull cap) with Perry’s name on it.

Part of this was due to his frankly brilliant performance in the debate, and in his CPAC speech the next day. (At CPAC, all nine candidates were allowed 15 minutes to talk about whatever they wished. This was a welcome change after watching a whole evening of 30 and 60 second sound bites, tightly controlled by the panel. I learned more about the candidates in those 15 minute speeches than I have in all the debates combined.)

Cain did what debaters are supposed to do. He talked about his vision for America, and specifically what he would do to make it a reality. In contrast, many on the stage bickered with one another, threw out one-liners and jokes, or whined and complained. Cain was a refreshing change.

But I don’t believe his trouncing of the front runners was due solely to his performance. I think Romney and Perry helped him by shooting themselves in the foot. According to TheStreet.com, “Former Utah Gov. Jon Huntsman Jr. captured the mood of the night when he was asked who he would choose as a hypothetical running mate, and Huntsman joked that it probably wouldn't be Perry or Romney because he felt like they were going to bludgeon each other to death.”

One thought about the Straw Poll. Don’t dismiss its importance because, “Florida is just one state.” As Florida Governor Rick Scott (that’s the third governor named Rick in this article!) said at CPAC, “Florida is a must-win state.” The Straw Poll has picked three of the last five Republican presidents, and a fourth winner became the Republican nominee, but wasn’t elected. Herman Cain convinced thousands of people that he is a formidable candidate.

Following the announcement of the results, Cain said in an interview that now the media would have to take him seriously, instead of constantly talking about the two supposed front runners. I’m not so sure about that. It’s in the interest of the media to have just two candidates. They would love to weed out seven of they could. There’s much more drama (and advertising dollars) when it’s a head-to-head contest between two fighters.

Michelle Bachman surprised me by not standing out in this debate as she has in others. Perhaps it was because she wasn’t given much time due to the drama playing itself out on the stage. Perhaps she was just tired, or having an off night. But, to me, she didn’t exhibit the fire I have come to expect from her.

We were allowed into the room two and a half hours before we went on the air, so the audience had plenty of time to discuss what we expected. There was a lot of buzz about the “new guy” in the race, former New Mexico Governor Gary Johnson. Actually, Johnson has been a declared candidate longer than Perry, and was in the first debate. I don’t know what the problem is with the other debate organizers. Maybe they only have nine podiums. Or perhaps the media just doesn’t like him. But I was glad that FOX included him in this one.

Johnson had some good things to say, and it will be interesting to watch him as events play out. He is a Libertarian, so his views on the Obama’s orgy of spending were as you would have expected. But one line was the hit of the night, and caused his name to be the most Googled name in the world the next day. He brought down the house when he said, “My neighbor’s dogs have created more shovel-ready jobs than Obama has.” The laughter was the longest of the night – almost half of his allotted 60 seconds. I wish you could have been there.

Some highlights from the other debaters: Newt Gingrich, arguably the smartest (and certainly the most well-read) person on the stage, had this to say about foreign aid to  nations that are hostile to the US and constantly vote against us in the UN: “Why are we giving them anything?”

Rick Santorum talked about the fact that in recent months there have been more searches for “foreclosures” than for “home loans.” And he declared that Obama is the new King George III. (In case your history is a little rusty, George was the tyrannical king of England whose taxation without representation triggered the American Revolution. Obama’s actions have triggered the New American Revolution led by the TEA Party.

No discussion of the debate would be complete without mentioning the party who wasn’t on the stage – the TEA Party. I can tell you that many of the five thousand who were at the debate, and the four thousand who attended CPAC were TEA Party members or supporters. And there is no doubt that every candidate, whether they like the TEA Party or not, carefully weighed every word for how it would play with this young group.

Let me close with a shameless plug for a Webinar I will host tomorrow night. While there is no national TEA Party to join (its spokesmen describe it as a “grassroots movement”) and I am therefor not a “member,” I strongly believe in the principles they espouse. And I have to say that it really ticks me off to hear the ignorant talking heads on TV mischaracterize the movement, the members and the message.

So I have asked a TEA Party spokesman to speak on the www.ChristianFinancialConcepts.com Webinar tomorrow at 8:00 PM (Eastern) on Monday, September 26th.  Yes, I realize that this is not a strictly financial subject. (The Webinars focus on Biblical financial concepts.) But I think we all understand that there is no profitable investment; no ability to plan for our financial future; and no economy, without Liberty. As Huntsman said in the debate, “We need to reestablish freedom in the marketplace.” The TEA Party is all about Liberty and reigning in an abusive federal government. If you’d like to hear about them from one of their spokesmen instead of from ignorant media types, send an email to Webinars@Bellsouth.net, and you will receive an invitation.