Today is the 1,000th day of Obama’s economic reign of terror. I can say with certainty that he has done more damage to this nation through his ill conceived economic policies than all the terrorist acts combined during this period.

WARNING: This article is intended only for mature adults who can handle the truth. If you're offended by frank, objective, politically incorrect commentary you should stop reading immediately.

Obama has undergone several no-confidence votes lately. According to the most recent polls 59% of Americans disapprove of the way Obama has handled the economy. His approval rating has dropped 30% since his inauguration.

Unbelievably, since January 20, 2009 - Obama's Inauguration Day - his government has spent on average $6.6 million every minute – most of it borrowed money.

In February, 2009, Obama made a prophecy on NBC. He said that if he did not improve the unemployment rate within three years he would be a one term president.

At that time unemployment was at 7.8%. It has been as high as 10.2% since he took office, and the official rate has averaged 9.4%. Worse, the rate has only dropped below 9% in two of the last 30 months - the worst run since the Great Depression.

Also, the official unemployment rate published by the Administration is probably at least twice as bad as they admit to, because it does not take into account:
1) People who no longer qualify for employment benefits.
2) People who have given up on looking for work.
3) The 16.5% of Americans who are underemployed.

So, how are we doing economically in the 1,000 days since Obama took office?

Here's the Scorecard: The government has spent more than $9.6 trillion in 1,000 days, which is about 60% more than the revenues it took in. GNP (the Gross National Product has fallen 9%. Industrial production has plunged 30%. The stock market has crashed 50%. The National Debt sits at $15 trillion, up $4.2 trillion just since Obama took office.  The national debt is now at 98.2% of GNP. And for the last three years we have spent $4.2 billion more than we take in - every day!

Over 2.2 million jobs have been lost. 4.5 million people have been unemployed for more than one year; the jobless are now out of work an average of 40 weeks - twice as long as they were before Obama took office. The only real jobs gain had been in the government sector - 140,000 jobs that add nothing to the economy. 12 million more people are on food stamps, and 3 million more Americans live in poverty than when Obama took office.

There've been 4 million bankruptcies and 2.4 million foreclosed homes. Gas prices are up over 80%. Health insurance premiums are up 13%. Seventeen of Obama's most senior economic advisers have quit. (Could this be rats leaving a sinking ship?) This is the weakest recovery since the 1930s.

The bottom line: This president has racked up as much debt in the last 1,000 days as did all the presidents in the nation’s first 218 years!

So how is that whole Stimulus thing working out for you? It isn't. You need to call your representative today and explain to him or her that government spending to create a recovery - is like a drunk trying to drink himself sober. Tell him or her about one of the most important economic facts of life: Government cannot create long-term, productive jobs. Only private enterprise can do that.

$862 Billion was spent on the Stimulus, which is supposed to create jobs. According to the Obama White House 3.6 million jobs were “created or saved.” That would put the average cost per job “created or saved” at $226,111.

Not everyone agrees with the White House's statistics. No big surprise there, given all the lies that have issued from there in the last 1,000 days. According to Moody's Economy Online only 2.5 million jobs were “created or saved.” If they're correct, that puts the actual cost per job “created or saved.” at $325,600.

However, the CBO (Congressional Budget Office) has a different number. They say that only 1.3 million jobs were “created or saved.” They have traditionally been the most accurate. If they are accurate, the real cost under the Obama Stimulus has been $625,150 per job “created or saved.”

The private sector actually does save jobs every day - by growing their businesses and keeping their people employed. But they're more honest than Obama – they only count jobs actually created. The average cost to create a job in the private sector is $21,000. That's about 1/30 of what the CBO says Obama spent to “created or saved” jobs.

But we need to remember what grandpa said: “Figures lie and liars figure.”

When I was at the conservative political action conference in Orlando recently I heard Ann Coulter speak. As always she was both funny and perceptive. She told us that, “Obama created or saved the Grand Canyon."

Another interesting note about this supposed jobs "created or saved" Stimulus plan: Most of the reporting was bogus.  The Washington Examiner compiled a report on the jobs creation data from information provided by the Associated Press, the New York Post, the New York Times, The Wall Street Journal, and the Government itself (www.Recovery.gov). You can read all the stories in the LINK below.

Let me just share a few of the more interesting ones with you (there are hundreds more):
In the town of Plymouth Connecticut the Police Department reported saving 108 eight jobs with its $15,355 stimulus grant. The department only has 23 officers! How did they save jobs they didn't have?

Fayetteville Arkansas received a $1,000 grant to purchase a lawnmower from the Toro Company. That single lawnmower was credited with saving 50 jobs! 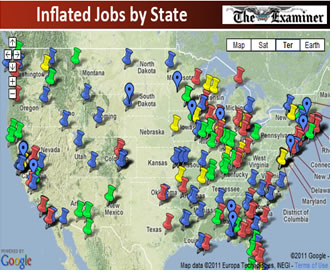 Washington, DC, is one of the most famous places in the world for giving out false numbers and statistics. The government had been funding and subsidizing low-income housing contracts with billions of dollars for many decades. When the Stimulus money became available they started using that to fund these decades-old projects, allowing them to use the previous money sources for other Socialist programs. The stimulus money was falsely credited with saving 5,977 jobs.

In Sacramento, California the California State University (CSU) claim it would have laid off 26,000 workers if it hadn't gotten Stimulus money. When he was pressed by reporters, a CSU spokesman said that they were really going to lay off half their workforce. "This is not really a real number of people. It's like a budget number." To me, that quote sounds more like a like a teenage Valley girl than an educated university spokesman.

In Westminster Colorado the city claimed that a road project grant of $150,438 created 117 new jobs. They base this on the number of people who, whether or not they are to get jobs, would work on the project for even one day.

In Hackensack New Jersey the Bergen County community action program stated that it's been its $213,000 to cover raises for existing staff only. But they also claimed they saved 85 jobs with the same money!

In Blooming Grove Texas a month-long roofing project to receive $30,000 in stimulus funds and involved just six workers reported that they created 450 jobs with the stimulus money.

Why would the politicians who reported these numbers lie about them? For two reasons: first the same people who held the purse strings for future grants were the ones who are requesting " positive" reports on job production. Second. Political motivation. Most of these false numbers came from Obama supporters. 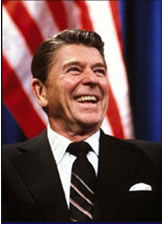 My hero, Ronald Reagan faced a similar economic situation when he took office, following a decade of rising unemployment and inflation. How did he produce such dramatically superior results?

Obama has done just the opposite. The Obama plan has been to increase taxes of all kinds. His administration has created 7096 new government regulations in the last 1000 days. He promised to cut defense spending by 50% when he was running for office; it looks like he's determined to keep that promise. And he has dramatically weakened the dollar by printing trillions and trillions of dollars that are backed by nothing.

Forbes magazine is a respected financial publication that does take sides politically. In a recent article in which they just examine the facts they made the case that Obama has significantly damaged our economy by:
1) Raising taxes
2) Passing anti-business regulations
3) Promoting pro-union laws that cripple industry

What should you take away from this article? First you can expect tougher economic times and greater inflation in the future. Because of this you should take the following actions. First you should reduce your debt as much as possible, as soon as possible.
Second you should invest so that you benefit from inflation. The best way to do that is with gold. And the best way to buy gold is to buy investment-grade gold, which is outperformed bullion Gold by seven times historically. You can contact me for sources for investment-grade gold, or you can go to Golden Art website (see the LINK below.

The conservative political action conference (CPAC) has historically been a bellwether for who will receive the Republican nomination. While I was there I participated in a poll in which attendees expressed in this single most important factor they would consider in voting for a nominee, and ultimately for the president. Although, as expected, many said their most important factor would be traditional values or national defense, the overwhelming majority-90%-said it was all about the economy.

The next occupant of the White House will be the man or woman who convinces the American people that he or she has the ability to cut the national debt and put the nation back to work. A huge majority of Americans of both parties have hardly rendered their judgment on Obama. They believe he is not the man the man for the job.

So the selection is the Republicans to lose. They can lose it by nominating a pseudo-conservative. And they can win it if they have the guts to run a real conservative.

PUBLISHER’S NOTE: Bob Wiedemer, best-selling author of “AFTERSHOCK!” will be speaking on the Christian Financial Concepts Webinar on Monday, Oct. 24th at 8PM (Eastern). This prophetic book has been on both the NY Times and the Wall Street Journal’s Best-Seller lists. His previous book, “America’s Bubble Economy” accurately predicted not only what happened in 2008, but also how and why it would happen. “AFTERSHOCK!” tells us what is going to happen next regarding inflation, real estate, the stock market, precious metals – and much more.
Attendance at this very special event is free. The five attendees who ask the best questions in the Q&A session will receive free personally autographed copies of the latest edition of AFTERSHOCK!. To receive a Webinar invitation, just send a request to Webinars@Bellsouth.net before 7PM. If you miss the live event, send an email to the same address, and you will receive a recording.

How to Benefit Financially from Inflation and the Economic Downturn
www.GoldenArtTreasures.com/CT