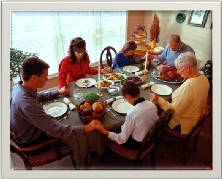 Have you ever heard the media, insurance companies and government officials refer to "Acts of God"? Basically, they blame God for everything from earthquakes to hurricanes. We could debate the theology of this type of thinking, but we'll leave that for another time.

Today, we give Him credit and thanks for the splendors of life. For all the wonderful blessings He has bestowed on us. For the beauty of nature. The Bible says that every good gift comes from the Father. So let's thank Him for our family - even when they irritate us. (Think how you would feel if they were suddenly gone.) Thank Him for your job - even if it's not the "perfect" job you wanted. (Millions have no jobs today.) Thank Him for providing your meal - even if the turkey was a little dry. (Billions go to sleep hungry every night.)

Give thanks TO Him FOR Him. Thank Him for being your God, the lover of your soul. And don't just do it today. EVERY day should be Thanksgiving Day...

I sent the three paragraphs above out to my friends and business associates on Thanksgiving Day. The part about “Acts of God” was inspired by an email I received from my friend Alvin Day. (Check out his website, www.AlvinDay.com and sign up for his free inspirational emails.)

The hundreds of emails I received after sending out that short missive made me change my plans for today’s article and instead comment on two aspects of the message.

First, let me share an email from Dan concerning so-called “Acts of God.” He wrote, “I hear them doing that all the time. I have gotten contempt of court charges filed against me twice for correcting judges for calling my son's accident an ‘Act of God’.”

Imagine that. I don’t know any more about the circumstances of his son’s accident other than what was in the email. So I don’t know if his son was injured or whether he died. But think about the arrogance of that judge, insisting on using archaic (and unscriptural language) to describe it.

Steven wrote, “When I am involved in any contracts I use the term ‘Force Mejeure,’ rather than blame God for bad.” This is a French tern that literally means “greater force.” In legal documents it is used to describe an unexpected and disruptive event that may operate to excuse a party from a contract.

“Thank you, Tom, for your most inspiring Thanksgiving message. I think of you often and pray God's special blessing upon your work and ministry.” Gerald.

“Thanks for this great reminder.” Mark

“Many of us have indeed taken too much for granted. It a good thing to remember the Lord at all time and to give Him thanks for all that He has done!” Westman

“Good word. In fact, the sign of a ungodly generation is unthankfulness.” John

Which brings me to an email link one reader sent me about our president’s thankfulness. It turns out he’s thankful – he just doesn’t seem to know who to thank!

ABC (which usually censors anything negative about Obama), headlined an article about his Thanksgiving message this way: “Obama Leaves God Out of Thanksgiving Speech, Riles Critics.”

"Holy cow! Is that one screwed up or what?" columnist Sherman Frederick of the Las Vegas Review-Journal wrote in a Thanksgiving-morning post. "Somebody ought to remind Obama (and his speechwriter) that when Americans sit down around a meal today and give thanks, they give thanks to God."

FOX News’ Todd Starnes remarked that Obama’s “remarks were void of any religious references although Thanksgiving is a holiday traditionally steeped in giving thanks and praise to God.”

Conservative commentator Ben Shapiro Tweeted, “Unreal that Obama doesn’t mention God in Thanksgiving message. Militant atheist. To whom does he think we are giving thanks?”

That’s the most important takeaway from Obama’s speech. He repeatedly talked about giving thanks. But he seemed to be confused about where to direct his thanks. It seems pretty simple to me. James 1:17 says, “Every good and perfect gift is from above, coming down from the Father.” But then Obama spent most of his adult years in a supposedly Christian “church” where the “pastor” cursed God and our country. So it’s not surprising that he doesn’t know anything about the Bible.

This is the first time in US history where a president did not thank God in his traditional Thanksgiving address. Yet every time he is in front of a Muslim audience, we hear “Allah” in every other sentence. What is wrong with this picture?

One Liberal Democrat commentator (who admits that he is a Pagan) whined that Christians and Conservatives always try to turn every holiday into a religious event. Doesn’t he realize that Thanksgiving Day was from the first a religious holiday – a day to give thanks…to GOD!

(If you would like to learn about “The True Pilgrim Story,” send me an email and I will send you a video by that name done on the ChristianFinancialConcepts.com Webinar by Craig Seibert. In it he describes the true origins of Thanksgiving Day with historical proof. He gives all the information that has been censored from our kids’ textbooks by the anti-Christian National Education Association.)

We teach our daughter that we need to have an “attitude of gratitude.” If we are truly thankful to God for the blessings He has given us, we will bless others, as He has taught us to do. So last Sunday she volunteered with others in our small church to pack Thanksgiving meals for almost 90 families in our community. And ours is just one of tens of thousands of churches across the nation who did the same.

Bishop Avis Hill pastors a small church named Westgate Tabernacle in West Palm Beach, Florida. Founded in 1929, Westgate has a tradition of helping the homeless and hungry. The church has been hounded and persecuted by city officials for years because they allow homeless people to stay in their sanctuary when they have nowhere else to go. Note the word “sanctuary.” For thousands of years churches have been considered places of sanctuary that the authorities left alone.

But the City of West Palm Beach doesn’t seem to understand that our Founding Fathers intended to protect churches from the government (rather than the other way around, as those who scream about the so-called “separation of church and state” believe). They say the sanctuary is not a licensed shelter. Since when does a church need a license to help the poor? And what sense does it make to force people back onto the streets when the church is willing to share its meager resources with them?

Let me share what Pastor Avis told me in his email… 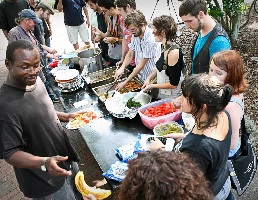 “Hope and I gave out over 400 meals to the homeless yesterday, out of our Mobile Chapel. I was sure tired, was up at 6 AM and traveled till 2 PM, in the woods, parks, streets wherever we saw those hurting. Down here we have what is called The Love Brigade. They cooked and prepared food for 2 days. They are part of an army of people who cooked over 100,000 meals nationwide. Civic groups, churches and religious groups from all over this county joined in the huge effort to distribute these meals. It was such a great feeling to be a part of such a huge outpouring of love.

“This marks my 30th year of feeding the homeless, elderly and shut-ins. Many of the volunteers were single elderly folks. I encouraged people who were going to spend Thanksgiving alone to come and volunteer. After we fed the homeless we had a blast, singing and eating together. It was like a family homecoming on Thanksgiving. Hope and I had a great time yesterday, people coming up to get food and giving us big hugs and thanking us. It was worth all the effort!”

If reading this has made you wish you could have participated, it’s not too late. Westgate Tabernacle ministers to the homeless all year round, not just on Thanksgiving Day. If you would like to help their ministry, call the church at 561-471-9309, write to the pastor at AvisLHill@aol.com, or just send a generous check to Westgate Tabernacle, 1700 Suwanee Drive, West palm Beach, Florida 33409. You will be blessed.