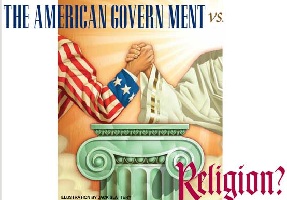 Our government, at all levels, is still hard at work attacking religion. I could give you thousands of examples of ways government is attempting to suppress the free expression of religion I regards to Christians, while encouraging Muslims to insert the tenets of their hate-filled religion into the very fabric of our legal system. We have published many articles on the dangers of judges being forced to consider Shariah (Islamic) law in their courts, and even having separate Shariah courts established that would have the same power as legitimate, Constitutional courts.

But today we will focus our attention on just three examples of the misuse of government power in its attempt to crush freedom of religion.  These abusers range from a local school board, to the most activist (and disgraced) federal district court, and all the way up to the president himself.

Let’s start with the outrageous bullying of a young school boy, not by schoolyard bullies, but by the Superintendent of Schools himself. I will let the Liberty Council tell the story by quoting their “petition of Outrage” (which I hope you will sign). Our thanks to subscriber Al Banfe for bringing this to our attention. Please feel free to send information that you feel will benefit the cause of Conservative Truth to Comments@ConservativeTruth.org.

CC: The Shawano School District Board of Education

“We, the undersigned American citizens are morally outraged over your unconstitutional censorship, humiliation, threatening, and bullying of Brandon Wegner regarding his op-ed explaining his Biblically-based views on homosexuality and homosexual adoption.

“While you were mocking this 15-year-old student, calling him “ignorant” for debating with you, YOUR ignorance was on full display by violating his First Amendment rights.

“While you threatened Brandon with suspension for violating your school system’s bullying policy – you, in fact, had become the bully – for which we are now calling for a full and sincere apology.

“While you humiliated and ridiculed Brandon, attempting to make an example of him, we are now holding you up to a similar experience before hundreds of thousands of American citizens who are now fully aware of your misguided tactics and ignorance of the basic constitutional rights held by every American.

“Mr. Carlson – you are now exposed as an overbearing administrator using your position of public trust to censor and punish a student for his perfectly legal use of the Holy Bible as a reference for framing his worldview on an important current topic.”

To sign the petition, click the link below. Liberty Council, a First Amendment, non-profit, litigation org. fights battles against the ACLU and wins 94% of the time. They are looking for signatures to support this 15 year old who simply wrote an article in his school newspaper explaining his views homosexuality and homosexual adoption. TO SIGN THE PETITION: http://www.libertyaction.org/345/petition.asp

My comments on this case are simple. Low level bureaucrats like this school superintendent are the very people who are tapped for state office, and later federal positions. Local politics are where most state and national politicians get the experience and the exposure that allows them to move up the ladder.

You may think that this local case is insignificant in the larger scheme of things, but you would be wrong. This man has violated the religious freedom of Brandon Wegner, and should be punished for this, first by being publicly humiliated for his unconscionable bullying of this brave boy, and then by being removed from office. A man like this should not be allowed to abuse of the power of his office, and then use it as a springboard to higher office. Liberals are looking for men such as him to further their aims. We as Conservatives should nip this in the bud. SIGN THE PETITION.

Now let’s turn our attention to the infamous Ninth Circuit Court of Appeals. If there were any common sense in this nation, this Court would have been disbanded years ago. It has been an embarrassment to the judicial system and all serious judges and justices in the nation. It’s often ridiculous rulings have been overturned by the Supreme Court of the United States more than all the other Circuits combined. It has been ridiculed even in the foreign media. Yet they still sit there, spewing their venom, hate, and unconstitutional rulings which seemed to be based on nothing more than their warped, ACLU- influenced, personal views.

In the case in question the State of California decided that it would not allow homosexual marriage. This was not a decision made by the politicians in Sacramento. All the people of the State had the opportunity to participate in the decision, and they turned out in overwhelming numbers. Despite intimidation and violence by homosexuals intended to suppress the vote it was passed. There were many physicals attacks on citizens by homosexuals bussed in from around the country, including one where a grandmother was              beaten by several homosexual men. And yet the people stood up and voted against the perversion known as homosexual “marriage.”

Enter the Ninth Circuit. In their arrogance two of these three “wise men” decided they would ignore the legal, constitutionally expressed will of the people of California. Imagine that. Two men have outvoted the entire State of California! I wonder if these two men have ever read the Constitution they have sworn to defend, and which they supposedly interpret. The Constitution clearly lays out certain rights and responsibilities for the federal government. Then it makes clear that all other rights and responsibilities (including the right to determine what constitutes “marriage”) are reserved to the States and to the People. Someone needs to explain these concepts to the bozos of the Ninth Circuit Court.

Finally, I would like to briefly comment on Obama’s foolish attempt to do battle with the Catholic Church. I will limit my comments on the specifics, since Dr. C. Peter Wagner has done an excellent job of dealing with them. His article, “Can the Government Tell the Church What to Do?” can be found in this week’s edition of www.ConservativeTruth.org online.

In the last election a majority of Catholics were foolish enough to vote for Obama. I call them foolish, because it should have clear to them, as it was to most Christians, that this was the most bloodthirsty man in terms of his support for the pro-death camp who has ever run for president. He made this clear on the campaign trail by courting the abortionist lobby. He made it clear by his voting record in the Senate. And he made it abundantly clear as a Chicago politician when he not only voted for, but actively lobbied for, a bill that made it illegal to provide life support for healthy babies who survived the attempts of their parents and doctors to murder them in the womb.

Who can forget the heart-rending video of the Christian nurse in a Chicago hospital who was ordered to dump just such a child in the dirty laundry room until it died of starvation? According to Obama’s law, it was illegal for her to so much as give a drop of water to this child of God who had survived the attempt of the so-called “Doctor” to kill this child before it was born. Instead, she held the baby in her arms for the 45 minutes it took for it to die an agonizing death from starvation and thirst.

Why any Catholic would vote for such a monster is beyond me. In fact, why anyone, religious or not, who had a shred of human decency could have voted for him, knowing of his complete disregard and contempt for the lives of unborn children, is baffling.

So I will continue to call Catholics and Evangelicals who voted for Obama in the last election simply foolish, because they may have actually been fooled. But now that his antipathy toward life has been made abundantly clear, I will consider anyone who claims to follow Christ not simply foolish, but a fool, if they vote for him again.

This man, who claims to be a Christian, hates religion. The only religion for which he has shown any support is the bloody, hate-filled Muslim religion. He has supported every attempt to suppress the freedom of religion of Christians. And he personally initiated this recent assault of the Catholic Church in his so-called “health care” bill.

It is a fact that when the Constitution is violated by those at lower levels of government in the ways that we have described, it is because the violators feel emboldened by the attitudes of those at higher levels. They know they will be protected by those who share their contempt for religious freedom and free speech.

Thus, the school superintendent feels safe to trample on the religious freedom of a 15-year-old boy, because he knows there are activist judges and justices who will protect him. Just look at the statement by the horrible Supreme Court Justice Ruth Bader Ginsburg on Egyptian TV when she spent four days there last week. Ginsburg came dangerously close to treason when she denigrated the Constitution she has sworn to protect and uphold. She told Egyptians that they should not consider the Constitution of the United States of America as a guide when they write a new constitution for their nation.

Ginsburg said, “I would not look at the US Constitution if I were drafting a Constitution in 2012.” Instead, Ginsburg, who in common with Obama, considers our Constitution to be outmoded, suggested a more “modern” document, namely South Africa’s, in laying more fundamental human rights and an independent judiciary. She also suggested that the Muslim-controlled nation look to the UN for principles concerning human rights. This is the same UN that took the United States off its Human Rights Commission and replaced us with the bloody nation of Sudan which murders and enslaves its citizens for the crime of being Christians.

And, of course, Ginsburg and the other Supremes with similar outrageous vies, along with the Ninth Circuit Court of Buffoons feel safe violating the Constitution, because Obama has their back. They know that a president who would trample the religious freedoms of one of the largest Christian organizations in the world can be counted on to appoint even more liberal judges and justices who will weaken the Constitution even more. They know that if they can’t get rid of the Constitution totally, they can use their black robes to misinterpret our founding document until it is all but unrecognizable.

Friends, our government at all levels has declared war on Christians and the Constitutionally guaranteed religious expression and freedom. We need to fight back. Our weapons are prayer and the ballot box. Let’s use them.