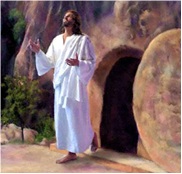 A Sunday School teacher was about to teach her third grade class about the Resurrection of Jesus. She wanted to see how much they had remembered from the previous year’s teaching, so she asked, “Does anyone remember Jesus’ first word’s when He rose from the dead and came out of the tomb? One little girl raised her hand and said, “I do, I do!” The teacher said, “Go ahead, Honey, tell the class what Jesus said.” She triumphantly shouted, “Ta da!”

Those were probably not His exact words, but that sweet little girl certainly captured the power of that moment of triumph. Jesus took everything Satan and evil men could throw at him – beatings, torture, humiliation, even death and burial – and threw it back in their faces! He defeated death, hell and the grave. He arose triumphant, just as He said He would.

Today I attended a large, predominantly minority church for Easter services. As the good news – the GREAT news! – was proclaimed that Jesus Christ arose from the dead, the crowd arose spontaneously! They shouted praises to God for His Son’s victory.

It did my heart good to see God’s people so open and enthusiastic in their praise and adoration for their Savior. Everyone worships God in their own way. That’s the beauty of Christianity: We can be formal or spontaneous in our worship; we can follow differing models of church governance; we can even differ in our doctrines. But the one thing that unites us in love is our certainty that God sent His Son into this lost world to live among us, die for our sins, and rise again to seal our eternal salvation.

And today all over the world Christians of all denominations opened their services with a tradition that has been practiced for thousands of years. The leader (whether he is called minister, pastor, priest or preacher) cried out with joy, “He is risen!” And the congregation joyfully replied, “He is risen indeed!”

Whether it was in a formal, liturgical church; a traditional evangelical church; or an exuberant Pentecostal or charismatic church, the message was the same. We live because He lives. Regardless of the surface differences between various groups of Christians, that binds us together for all eternity.