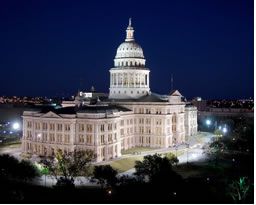 100 students have taken over the Capitol. They occupy the Senate, the House of Representatives and the Governor’s office. They organize themselves and within days start issuing laws and administrative orders. The frightening thing is that all these laws and orders are being issued from the Capitol itself!

This sounds like the plot for a new political thriller, doesn’t it? But in fact, this scenario is going to play itself out just as I have described it in less than two months’ time unless something is done to stop it. And I sincerely hope nothing does happen to prevent it, because my daughter is very much looking forward to being part of the group that takes over the Capitol Building in Austin, Texas at the end of July.

In fact, the group that plans the takeover is led by a former Texas State legislator, Rick Green. He is the mastermind behind the plot to occupy the Capitol Building, and I predict he and his co-conspirators will be successful; after all, this will be the tenth time they have done it! The event is called the Annual Patriot Academy, and of course it has the blessing of the Texas State Government. 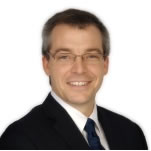 I first met my friend Rick Green at a meeting in Dallas that was convened to discuss ways that Conservative Christians could impact our society. There were representatives from all of the “Seven Mountains of Influence,” a concept popularized by another friend, Lance Wallnau. Everyone there represented one of the Mountains that have tremendous influence in our society: Family, Business, Education, Arts & Entertainment, Religion, Media, and Government.

Rick passionately represented Government. You could tell as he spoke that this was a man who deeply loves America, is intimate with the Constitution, and would do anything in his power to defend the freedom’s that we are so blessed with in this country. I made up my mind right then that this was a man I wanted to know better.

You can tell a lot about parents by observing their children. Rick and Kara Green have done an amazing job of raising their four kids. I next ran into the Greens at the FPEA (Florida Parents Educating Children), the largest Homeschool meeting in the country, with over 12,000 in attendance. A big part of the reason many came was to hear Rick Green and his children talk about the Constitution. 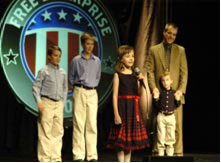 These beautiful kids didn’t just recite large sections of the Constitution and the Declaration. They explained what they meant. I remember telling Rick that his kids put many adults and even politicians to shame with their knowledge of and passion for our Founding documents. My heart was bursting with pride as I watched them on stage – and they aren’t even my kids! I could only imagine how Kara and Rick felt.

Rick is an integral part of Wall Builders, and organization started by David Barton that is dedicated to preserving America’s history and heritage. He speaks on behalf of this great organization and represents it at events such as the Home School Convention. On his own website you will find information on the Patriot Academy and how to invite him to speak to your church or organization about the Constitution, Freedom, America’s Foundations, and Free Enterprise. (LINKS to all three websites can be found at the end of this article.)

Ricks has degrees in finance and law, and, at the age of 20, was the youngest person ever to be admitted to the University of Texas Law School. He was elected to the Texas State Legislature at the age of 27, and has produced an outstanding documentary, “The Legacy of President Ronald Reagan: The Truth about the Eighties.”

With the opening of this year’s Patriot Academy two months away, I met with Rick to discuss what my daughter, Sarah, would experience while she was there. When he told me they still have a few spaces left in both the Patriot Academy itself and the new Adult Track (more about that later), I decided that I would devote this week’s Conservative Truth to letting my readers know about his awesome opportunity.

The Patriot Academy starts on Monday, July 30 and runs through Saturday, August 4. It includes instruction, workshops, hotel and all meals for the week. They accept young adults from ages 16 to 25. In telling you about the Academy, I will borrow material from their website because they can tell their story best. (Website material is within quotation marks.”

What is the Patriot Academy? “The vision of Patriot Academy is to equip a new generation of Patriots to become leaders in local, State, and Federal governments and to help bring our nation back to the principles of liberty on which we were founded. Founded by former Texas State Representative Rick Green, our first student session began in 2002.”

Even if your child or grandchild does not aspire to public office, the principles they learn here will make them leaders in whatever occupation the Lord leads them into. The experience will make better citizens and more passionate advocates for freedom. Besides, many students came here with no intention of getting involved in politics, and left with a burning desire to serve their country. The Academy is truly a life-changing experience.

What are the goals of the Academy? 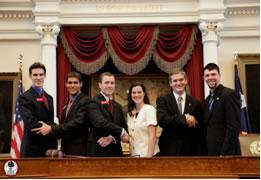 What will the attendees experience? The students will literally become the government of the State of Texas for this week. They will serve in the House and the Senate. Everyone will be part of a committee that will propose legislation. The proposed laws will then be debated on the floor, and will be voted up or down. The students elect their own Governor, Lieutenant Governor and Speaker of the House.

In addition, each student is assigned a mentor who contacts them even before the Academy starts. The mentor, a past attendee, helps the new student understand what they are about to experience and answers their questions, so that they get more out of their time in Austin.

They will also learn from and interact with both current and former elected officials, who will share with them real life experiences that are not found in textbooks. The Patriot Academy’s vision is to raise up a new generation to lead the change in America. That’s why it is so important that they hear from legislators who love America and are willing to speak into the lives of these wonderful young people.

My last question is more personal: Why do I want MY daughter to experience the Patriot Academy? Well, like every parent, I want the very best for my daughter. And the Patriot Academy is the premier institution of its type in America.

But the more basic question is, why would I want her to attend what is basically a political summer camp? She is already attending a church camp and a musical theater camp. Kids are supposed to enjoy summer. Why cram her head full of boring stuff like the Constitution, civic duty, and the dusty writing of our Founding Fathers?

Because it’s NOT boring. It’s fascinating, particularly the way Rick and his staff teach it. More important, I am blessed with a daughter who understands more about these things than most adults, and is thirsty to learn more! We didn’t tell her she had to go. We told her what it was about and she jumped at the chance (particularly after reading what the kids who have attended had to say).

Here’s what my teenager has to say about her upcoming adventure:

“I’m excited about going to the Patriot Academy because I believe it will give me a unique understanding of the politic process. It will help me understand how lawmaking and elections really work. I’m looking forward to meeting new friends who believe the same as I do about the Bible and the Constitution.”

Let me close this by quoting two outstanding Americans:

And this, written by Patriot Academy graduate Patton Ritter:

“Those soldiers who died for us…did not die so that we could let our country go to waste. They died so that we could live in a peaceful country where democracy reigns. It is our duty as Americans to honor that ultimate sacrifice by doing our part to live the American dream. It is America’s job to be a leader in this world. It is our job as Americans to protect this country for future generations. I believe that is what our soldiers would have wanted. That is why they sacrificed what they did. They were not thinking about themselves, they were thinking about the future generations. This is why I am proud to say that the most important lesson I have learned is to be proud of being born an American.”