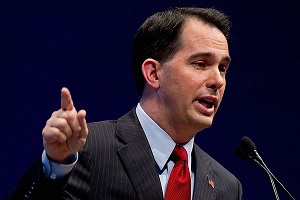 First of all, let me make it very clear that I am not running against Governor Scott Walker in the Wisconsin race. That Tom Barrett is the Democrat Mayor of Milwaukee.

What makes this election so interesting is that political observers on both sides predict that this could be a game changer for Obama five months from now. Why all the fuss about Wisconsin?

Well, first of all, it is one of most important battleground states. It is very important for Obama to win it for many reasons. He won Wisconsin in 2008. To lose it in 2012 would be a major embarrassment.

Losing Wisconsin will also mean that Obama has been weakened with one of his most important constituencies. Unions, particularly public unions, not only voted for Obama in 2008 – they gave him millions of dollars, and they spent tens of thousands of hours in get-out-the vote campaigns on his behalf.

This recall election of Governor Scott Walker is mostly about Wisconsin’s public unions and their ability to blackmail the state government. Walker led the state in curtailing the power of unions to shut down essential services (including public safety) and he insisted that they contribute more to their own pension and health care costs. So the unions led the effort to recall Governor Walker.

Most important, if he loses this state, it will almost certainly mean that Mitt Romney will win the presidency. Many political insiders have flatly stated that if Obama loses Wisconsin, he will be evicted from the White House. And the outcome of the Governor’s race next Tuesday could determine whether or not Obama will lose this critical state.

I predict that Walker will win this election decisively. When he does, he will have shown unions all over the nation that it is possible for a state to protect itself from union bullying and extortion. And this will probably spell doom for Obama’s reelection.

The main issues in Wisconsin revolve around Walker’s handling of the state economy and his standing up to the union bosses. Liberals hate facts, so I will list some of the facts about Walker’s administration just to upset them:

1) Walker has only been Governor of a relatively small state (in terms of population) for one and a half years. Yet he has managed to enrage Liberals and Socialists all over the nation. That is an accomplishment in and of itself.
2) He has lowered the tax burden on small businesses.
3) This has allowed the private sector to create many new jobs. This is where we need jobs. Obama creates new government jobs, which are a drag on the economy. Walker has created an environment where businesses can create jobs that benefit the economy.
4) Today there are smaller classroom sizes and fewer teacher layoffs than at any time in the last decade, due to Walker’s reforms.
5) His union reforms have resulted in dramatically lower health care costs.
6) When he took office Wisconsin faced a budget deficit of $3.6 Billion. Walker has turned this around, and this year – for the first time in 15 years – the state will have a budget surplus!

Recent surveys show that 75% of the state’s citizens approve of how he handled the unions, and only 22% disapprove. Also, in a state that voted Democrat in a big way three and a half years ago, 54% approve of the way he has improved the economy; only 42% disapprove. That means that a lot of Democrat voters now like the guy, and will probably vote for him this week.

More important, public union membership has dropped dramatically since the reforms took place; some reports say by as much as 50%. This is because the new laws make it impossible for workers to be forced to pay union dues. In Wisconsin, dues used to be taken from their paychecks whether they wanted to be in the union or not. (This is also done by most teachers unions nationwide, which is how conservative teachers are forced to support union activities they abhor.) Their dues went to support Obama whether they liked it or not, because the union bosses said so. Now that they have a choice, thousands have left the unions for good.

This is an amazing victory for freedom of choice. The Democrats always scream about choice, but they only want people to have the choice to murder their babies when they were too lazy to use birth control. They definitely do not want conservative workers to have a choice about whether they are forced to pay dues to a union that stands for everything they hate.

The irony is that the national unions have painted themselves into a corner. They stated categorically that if Scott Walker moved ahead with his planned reforms, they would “take him down.” They sent out of state agitators into Wisconsin; they instigated the recall vote; and they spent millions to defeat this brave Governor. And now they have egg on their collective faces, because they will almost certainly lose.

The most interesting part of this is that Obama and the DNC (Democratic National Committee) have done nothing to help Wisconsin Democrats. Obama didn’t come to Wisconsin to campaign for challenger Tom Barrett. That may well be because he was embarrassed when he campaigned for Democrat Martha Coakley in her race against another Scott (Scott Brown in Massachusetts) and she was trounced. Likewise, the DNC refused the Wisconsin Democrat Party’s request for millions of dollars to help defeat Walker.

In researching this article I found a photo of a sign on a citizen’s lawn. It said, “Recall Santa. I didn’t get the present I wanted.” That’s a perfect metaphor for this recall. Walker was elected to do exactly what he has done: Improve the economy, lower taxes, and rein in the union bosses. He was very clear about what he would do if elected. Now that he has done what the people elected him to do, the Liberal agitators want a redo on the election.

This whole recall effort is having the opposite effect of what its Socialist organizers intended, and it could well have a domino effect that goes well beyond Wisconsin. Since the unions didn’t get the support they wanted from Obama and the DNC, they may not be very enthusiastic about supporting Obama in November. Without strong union support Obama doesn’t have any hope of keeping his cushy job and his dozens of golf vacations at taxpayer expense.

To say that all this makes me happy would be a major understatement. Anything that gives Obama heartburn makes me jump for joy. And I think he will be experiencing major heartburn on Tuesday night.

Let’s pull together to make sure Walker is reelected. Take a few minutes and go to www.StateTeaPartyExpress.org. Get the facts, and call everyone you know in Wisconsin. Forward this article to Wisconsin voters. If we stop the Socialists and corrupt union bosses in Wisconsin, we can stop them across the nation. Let’s take our nation back, starting with the great State of Wisconsin.